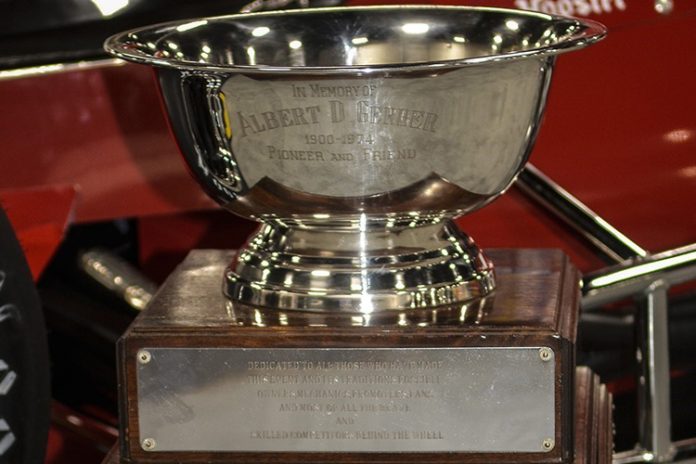 PORT COLBORNE, ONT – In 1951 a tradition began that has spanned 67 racing seasons. Each year since 1951 there has been a Race of Champions winner and the winner’s name was etched and placed on a perpetual trophy topped by an iconic silver cup that was dedicated to and renamed the Al Gerber Memorial Trophy, one of the most recognized trophies in motorsports today.

Originally the race was run on a dirt surface at the legendary Langhorne (Pa.) Speedway and Hully Bunn of Connecticut claimed the victory in 1951. The race was run on dirt 14 times until the track was paved in 1965. Modified driving icon, Dutch Hoag of Bath, N.Y., was the only driver to win the race on both dirt and asphalt.

Tonight, at Humberstone Speedway in Port Colborne, Ontario, the dirt racing tradition that was originally created will be brought back to life with the running of the Pete Cosco Memorial Race of Champions. The winner will receive a trophy with a silver cup and the Race of Champions is creating a perpetual trophy which will debut tonight, that will be dedicated in Pete Cosco’s name, but recognize the great driver’s that win it year-after-year.

“It has been my goal of establishing a Race of Champions on dirt that provides the winner with something special that will be recognized year-after-year,” offered Joe Skotnicki, Race of Champions. “When Linda Cosco, Bob Davidson and myself originally spoke, this was not something we had originally discussed. Over time I began to think about all that Pete Cosco meant to racing in the Niagara and Western New York regions, the people he helped, the work he did with Humberstone, his dedication and passion about the sport. Linda has done an incredible job of carrying on that passion, along with her family. It is a racing family, dedicated to the betterment of short track racing at a grassroots level and that’s what the Race of Champions was built around.”

The Pete Cosco Race of Champions Trophy will be awarded each year. The event will be determined and scheduled by Race of Champions management and the Cosco and Davidson families. The winner will also get to keep the perpetual trophy for a time after the event and receive a keepsake replica silver cup that signifies being a Race of Champions winner.


In addition, at the request of several Dirt Sportsman Competitiors, Dirt Sportsman racers that are in the top-five in either the Race of Champions Dirt 602 Modified Series or Humberstone Speedway championship standings as of today, will be permitted to attempt to qualify for tonight’s Race of Champions Dirt Modified race at Humberstone Speedway provided they upgrade their Membership to a Modified level and enter by purchasing a second pit pass to compete.

The Race of Champions is a sanctioning body presenting Modified and Stock Car racing on asphalt and dirt surfaces throughout the Northeast, with events in New York, Pennsylvania and New Jersey. The 67th annual Race of Champions weekend will take place in 2017 at Lake Erie Speedway in North East, Pennsylvania as part of Presque Isle Downs & Casino Race of Champions Weekend and is the second longest consecutive auto-racing event in North America, second only to the Indianapolis 500.