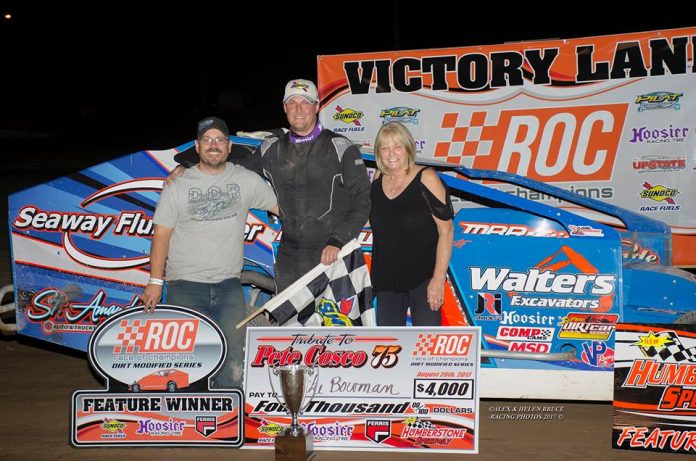 PORT COLBORNE, ON –  St. Catharines, Ontario’s Mike Bowman was victorious in the inaugural visit to the Humberstone Speedway for the Race of Champions Dirt Modified Series in the Tribute to Pete Cosco 75 presented by Rankin Construction, Wood and Company, and Cosco Haulage. With the victory, Bowman’s name will be placed on the Pete Cosco Memorial Perpetual Trophy. Port Colborne, Ontario’s Chad Chevalier scored his second win in the Race of Champions Dirt 602 Sportsman Series for 2017. Bobby Tolton from Fergus, Ontario won his first career Mini Stock feature at Humberstone.

“I bought my first car from Pete (Cosco) in 2004 and our families have been really close for years” stated race winner Mike Bowman. “It is really special to win here and win this race in Pete’s honor” Bowman added.  Todd Gordon and Jeff McGinnis brought the field to the green flag with Gordon leading the opening circuits with Erick Rudolph taking second away from McGinnis on lap four. Rudolph would go to the outside of Gordon to take the lead on lap eight. Mike Bowman would battle with Gordon for second, as Rudolph would open up his advantage over the field. Tyler Willard would bring out the races first caution on lap 19. On the restart, Rudolph would take the lead with Gordon, Mike Bowman, Cody McPherson and Jay Mallory raced in the top five. Bowman would challenge Gordon for second place throughout the feature distance, with taking the runner up spot for good on lap 31.

This event made up the first race of the season for the Race of Champions Dirt Modified Series. Event number two will take place on Thursday, September 7th, at the Stateline Speedway in Busti, NY.

In race number four of the Race of Champions Dirt 602 Sportsman Series, Tyler Puchalski and Dylan Davidson brought the field to the green flag with Davidson showing the way early. Luke Carleton raced in second with Puchalski, Chad Chevalier and Adam Leslie racing inside the top five. Davidson continued to show the way over Carleton as the leaders hit lap traffic on lap 16. Adam Leslie went over the edge in turn three to bring out the races first caution. On the restart, Davidson would clear Carleton for the lead, as Carleton raced with Chevalier for second. Chevalier would take the second spot from Carleton on lap 18 and would quickly go after Davidson. At the halfway mark, Davidson continued to show the way over Chevalier with Rouse, Puchalski, and Carleton in the top five. Chevalier would work on the outside of Davidson to take the lead on lap 29. The leaders would hit lap traffic on lap 31. While in lap traffic, Chevalier would be able to pull away from Davidson. Chevalier would drive on to get his second RoC Sportsman tour win of the season, and fourth win of the year at Humberstone. Dylan Davidson, Brad Rouse, Tyler Puchalski, and Luke Carleton completed the top five.  Race number five on the Sportsman Series trail will take place on Thursday, September 7th at the Stateline Speedway in Busti, NY.

NEWS AND NOTES:  In hot lap time trials, Mike Bowman earned a new track record of 15.106sec. The Race of Champions unveiled the Pete Cosco Memorial Perpetual Trophy to the winner of the Modified event. The Pete Cosco Race of Champions Trophy will be awarded each year. The event will be determined and scheduled by Race of Champions management and the Cosco and Davidson families. The winner will also get to keep the perpetual trophy for a time after the event and receive a keepsake replica silver cup that signifies being a Race of Champions winner.

Humberstone is back in action on Sunday, August 27th as Cosco Haulage presents the third annual Pete Cosco Memorial for Modifieds. Big Block Modifieds will be allowed to run against the Niagara Region’s best 358 Modified drivers. A full Humberstone show is also on the card with gates opening at 4:30 pm in the pits,5:00 pm in the grandstands and race time on Sunday is at 6:30 pm.