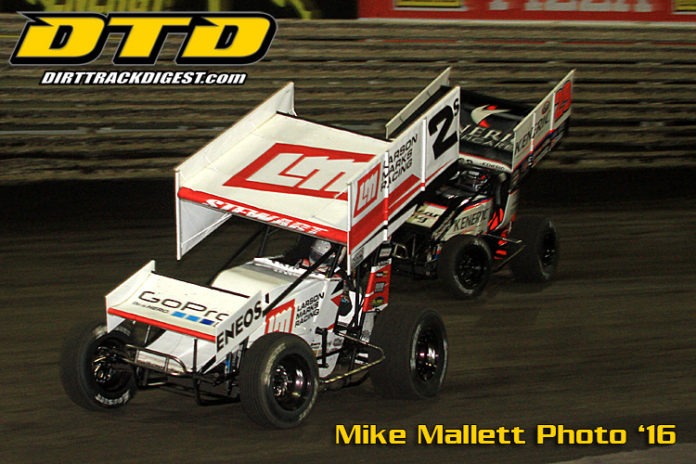 RANSOMVILLE, NY – After 20 years since the last time the World of Outlaws Craftsman Sprint Cars came, they will return to the hamlet of Ransomville on Sunday July 23rd for the running of “The Big R Outlaw Shootout”. Tickets will go on sale first to Season Ticket Holders, starting Wednesday January 18 through Wednesday January 25 before being available to the general public.

The “Greatest Show on Dirt” has ran two races at Ransomville. On Tuesday August 9, 1994, “The Buckeye Bullet” Dave Blaney won the inaugural visit. Blaney led all 25 laps to score the win in front of a packed house at “The Big R”. The one lap track record was set by “The Wild Child” Jac Haudenschild as he ran a 14.582 second lap around the semi-banked, ½ mile, an average speed of 123.440mph. Blaney’s victory earned him $5,210 for his efforts. Sammy Swindell finished in second followed by Steve Kinser, Jeff Swindell and Jac Haudenschild.  In 1997, Andy Hillenburg went to victory lane. Hillenburg’s triumph was his first on the season and earned him a $7,000 payday. Blaney would finish second with Haudenschild in third. Donny Schatz and Stevie Smith completed the top five. Mark Kinser set the track new one lap record by running a 14.365 second lap around “The Big R”. The events scheduled in 1995 and 1996 were rained out.

About Ransomville Speedway:  Ransomville Speedway is located on Braley Road in the hamlet of Ransomville, just 20 minutes from Niagara Falls and Lockport. “The Big R” is a ½-mile DIRTcar sanctioned facility that is the Home of the Summer Nationals. For more information, please visit us on the World Wide Web at www.ransomvillespeedway.com  as well as follow us on Twitter @Ransomville and like us on Facebook. You can also contact the speedway by phone by calling (716) 791-3602 or (716) 791-3611.