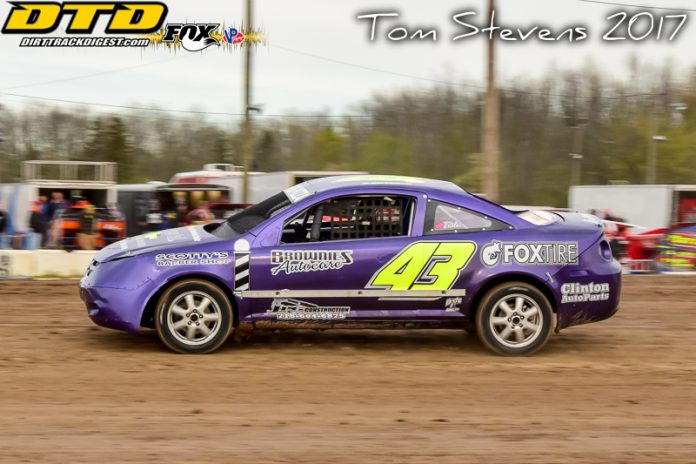 RANSOMVILLE, NY – Niagara Falls, NY pilot Anthony Guthrie was at the right place at the right time as he held off Ashley Harbison to pick up the feature win for the Gippsters Collision 4 Bangers on Opening Night presented by VP Racing Fuels and Fantasy Island at the Ransomville Speedway on Friday night. A pair of showers slowed the program down with the second burst of rain forced Ransomville management to call off the rest of the program.

With over half the show completed before the rains came, the show was called complete. Double features will be held for the 358 Modifieds, Sportsman, Street Stocks and Novice Sportsman in the coming weeks. A complete schedule update will be posted in the coming days on the track’s social media pages as well as the track website, ransomvillespeedway.com

Howard Guthrie and Ashley Harbison set the pace for the first feature of the season for the Gippsters Collision 4 Bangers with Guthrie jumping into the lead. Chad Desso took second away from Harbison on lap four as Guthrie opened up his lead to a full straightaway by the halfway mark. Brandon Potter brought out the races first caution on lap nine, erasing Howard Guthrie’s lead. Guthrie would lead the field off the restart with Desso in second and Desso caught Guthrie with two laps remaining as he looked to the outside and would drag race to the white flag. The leaders hit the turn two wall on the final lap, giving the lead to Anthony Guthrie. Anthony Guthrie would score the win over Ashley Harbison, Brendan O’Keefe, Matt Hornquist and Steve Matson.

Time Trials were on the card for the Krown Undercoating 358 Modifieds and the Investors Service Sportsman with Chad Brachmann (17.266sec) and Brett Senek (18.432sec) won a barrel of VP Racing Fuel. A total of 95 cars signed in pitside for Opening Night. When the Modifieds will take to the track for their feature it will be Brachmann and Kenny Wills on the front row while Senek will share the front row with defending Sportsman track champion Matt Farnham for their feature event.

Krown Undercoating 358 Modifieds heat races were won by Pete Bicknell, Erick Rudolph and Allan Wills. Qualifying heats for the Sportsman were won by Derek Wagner, Dave Flannigan Jr and Cody McPherson. Garrison Krentz won the last chance qualifier. Anthony Muscato flipped in turn one during qualifying. He was alert and talking to the track medical staff and climbed out of his car under his own power. Bill Bleich Jr and “Showtime” Jaren Israel won the heat races for the KiPo Chevrolet Street Stocks. Howard Guthrie won the qualifying heat for the Gippster’s Collision 4 Bangers.  Cameron Tuttle won the qualifying heat for the Stevenson’s Hardware Novice Sportsman.


The 60th season of racing at the Big R will continue on Friday May 19th as Johnston’s Restaurant presents a full card plus the Street Stock Mechanics race. Gates will swing open in the pits at 5:00pm with grandstands opening at 6:00pm with racing action starting at 7:15pm.