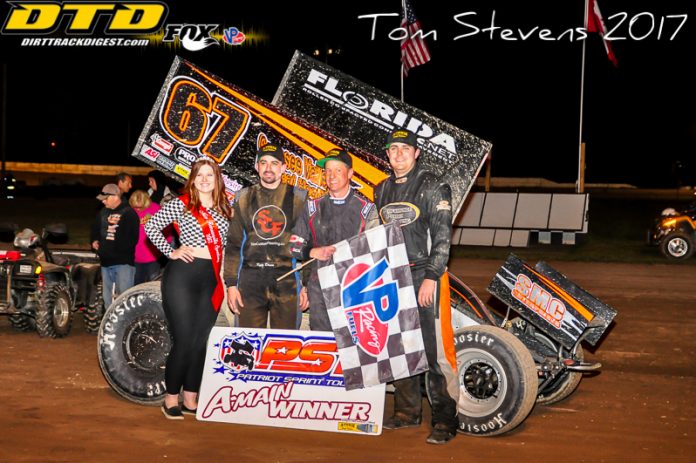 “Lil’ Cobra” Kelly Hebing and Derek Jonathan brought the field of 21 Patriot Sprints to the green flag for their 25 lap A-Main with Hebing jumping into the lead with Steve Collins raced in second, Jonathan, Kyle Drum, and Josh Azzi raced in fifth early on. Chris Steele and Dan Bennett collided in turn four to bring out the races first caution on lap four. Hebing kept the lead off the restart as Jared Zimbardi raced his way into the lead pack as he raced in sixth place, working on Jordan Givler for fifth place. Jordan Thomas brought out the caution on lap 11, just before Steve Collins passed Hebing for the lead. On the restart, Derek Jonathan spun in turn two to bring out the caution on lap 12, just as Dane Lorenc came to a stop in turn four. Hebing and Collins took off with Kyle Drum raced in third with Givler and Zimbardi raced in the top five at the halfway mark. Joe Trenca flipped in turn three to bring out the red flag on lap 14. Pete Richardson and Derek Jonathan also spun while contact was made with Joe Trenca. Collins looked underneath Hebing to take over the lead on lap 15 Kyle Drum caught Hebing for second but Hebing held Drum off. Drum would take second away from Hebing on lap 19. Zimbardi would then go after Hebing and would pass her for third place with just four laps remaining. “The Flying Physician” Steve Collins would pull away to score his second career A-Main victory with the Patriot Sprint Tour. Kyle Drum, Jared Zimbardi, Kelly Hebing and Jordan Givler completed the top five.

The first main event for the Investors Service Sportsman took to the speedway for the rain-delayed feature from May 12th with Brett Senek and Matt Farnham on the front row and it was Farnham showing the way over Senek with Dave Flannigan Jr running in third. Austin Susice spun in turn four to bring out the races first yellow of the night, just as Mike Williams slowed on the front straightaway with issues with just two laps completed. Senek would regain the lead on the restart with Derek Wagner taking third away from Flannigan. Garrison Krentz spun in turn three to slow the field down once again on lap eight. Farnham would hound Senek for the lead for several laps but Senek was able to keep the lead. Dave Conant hit an implement tire in turn four, collapsing his front end on lap 17.  On the restart, Dave Flannigan Jr and Greg Martin hooked nerf bars on the front straightaway and spun to bring out the caution. Both were able to rejoin the field. Chris Burek went underneath Wagner to take over third with six laps remaining. Dave Flannigan Jr flipped, in turn, one with five laps remaining to bring out the red flag. Dave climbed out of his car under his own power. Senek would hold off Farnham to score the win. Burek, Wagner, and Henry would complete the top five.

The second feature of the night for the Sportsman was led to the green flag by Chris Burek and Brett Senek with Burek showing the way. Matt Farnham would take the lead away from Burek on lap two. Chris Burek spun in turn one and collected Brett Senek on lap four to bring out the caution. On the restart, Farnham took off with Greg Martin taking over second place. Martin would take the lead away from Farnham on lap eight but Farnham would regain the lead just one lap later. Dave Conant battled with Martin for second place but Martin was able to hold him off. Kevin Wills worked through the field and took second away from Greg Martin with five laps remaining. Matt Farnham pulled away from the field to score the nightcap victory.

Brandon Sherwood and Brian Monahan led the KiPo Chevrolet Street Stocks to the green flag for their 20 lap feature event and it was Sherwood blasting into the lead followed by Bill Bleich Jr after Brian Monahan spun in turn three. On the restart, Sherwood, Bleich and Jaren Israel battled for the lead. Israel suffered a flat right front tire on lap three to bring out the caution for the second time. On the restart, Bleich would take over the lead from Sherwood with Jake and Pete Stefanski battling for third. Israel worked his way back through the field and raced mid-pack at halfway. Austin Hauser went up in smoke on the front straightaway to bring out the caution on lap 11. The mid-race restart saw Israel take over fifth and then fourth after passing Pete Stefanski. Israel then passed Jake Stefanski to take over third on lap 13 and then went after Brandon Sherwood for second and would take the spot away with just two laps remaining. Billy Bleich Jr would hold off Jaren Israel to score the feature win.

Cole Susice and Chad Desso brought the field of Gippsters Collision 4 Bangers to the green and it was Susice showing the way early on. Ashley Harbison-Bleich slowed in turn two to bring out the caution on lap three, just as Chuck Kala lost a wheel on his racer. Susice and Desso battled for the lead off the restart as Desso would take the lead on lap four. Susice and Desso would trade for the lead for several circuits until Susice regained the lead on lap eight after Desso had issues and pulled into the pits. Susice would pull away from the rest of the field and the defending divisional champion would score the win. Chris Leone finished second followed by Anthony Guthrie, Steve Matson, and Anthony Hermanson completing the top five.

Kyle Wendt and David Fingerlow shared the front row for the Stevenson’s Hardware Novice Sportsman feature and it was Wendt jumping out into the lead. Robbie Johnston took the lead away from Wendt on lap three. Wendt regained the lead on lap six. Wendt had issues and broke in turn two and pulled into the pits as Robbie Johnston re-inherited the lead. Johnston would hold off David Fingerlow, to pick up the win.

The 60th season of racing at the Big R will continue on Friday, June 9th as BlueCross BlueShield of WNY presents Labor Night at the Races benefiting the United Way of Greater Niagara. A-1 Land Care Inc and Niagara Hardwood will also present the racing program.  A full card of racing will be presented plus double features for the 358 Modifieds. Gates will swing open in the pits at 5:00 pm with grandstands opening at 6:00 pm with racing action starting at 7:15 pm.