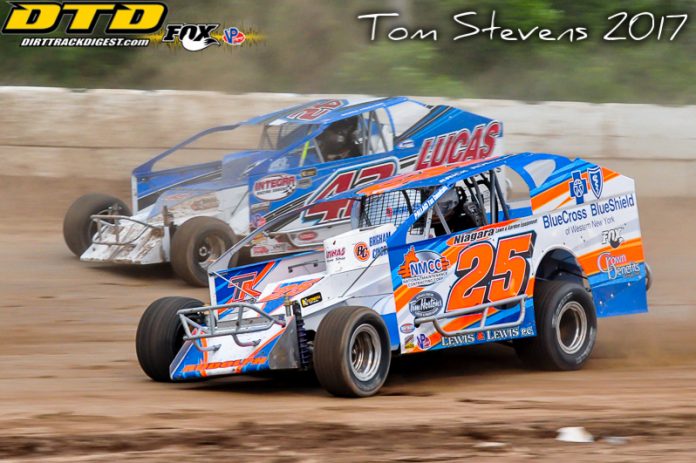 The first Krown Undercoating 358 Modified feature of the night was the make-up event from May 12th and was led to the green flag by Chad Brachmann and Kenny Wills with Wills leading lap one over Brachmann with Erick Rudolph, Pete Bicknell and defending champion Ryan Susice running in the top five. Ricky Richner slowed and spun on the back straightaway and Jim Zimmerman had nowhere to go and got into Richner to bring out the red flag on lap six. Richner climbed out of his car under his own power. Wills jumped back out front on the restart over Brachmann, Bicknell, Rudolph and Jeff McGinnis racing in the top five. “The Professor” John Smith spun exiting turn two on lap nine to bring out the race’s second caution. Chad Brachmann would take the lead from Wills on the restart and would take off in the lead as the battle was on for third between Erick Rudolph and Pete Bicknell with Ryan Susice running right behind them. Todd Gordon slowed on the back straightaway to bring out the caution on lap 21, erasing Brachmann’s straightaway lead over the field. Rudolph would take second away from Wills on lap 22 and Susice followed suit to take third with seven laps remaining. The caution would come out with two laps remaining as Erick Rudolph slowed coming off turn four, running second. Kenny Wills spun, in turn, two on the last lap, bringing out the caution after contact with Pete Bicknell and Gary Lindberg. Brachmann had issues under the caution and went to the pits, giving the lead to Ryan Susice. Susice drove away from Tyler Willard to pick up the win. McGinnis, Tommy Flannigan, and Kenny Wills completed the top five.

In the nightcap, it was Jeff McGinnis and Gary Lindberg bringing the field of 358 Modifieds to the green flag with Lindberg showing the way as Erick Rudolph battled McGinnis for second. Rudolph would take the runner-up spot away on lap two and would go after Lindberg as Chad Brachmann battled McGinnis for the final spot on the podium. Rudolph and Lindberg battled for the lead with Rudolph taking command over the field on lap eight. With Rudolph showing the way, the battle was on for fourth place between Ryan Susice and Chad Brachmann Rudolph was pulling away from the field; as he went on to score the win in the BCL Racing entry for his first win at Ransomville in 2017. Gary Lindberg would finish in second followed by Jeff McGinnis, Ryan Susice, and Chad Brachmann.

Dave DiPietro II and “Insane” Eddie Cain led the field of Investors Service Sportsman to the green flag for their 25 lap feature event and it was DiPietro showing the way early on. A multi-car pileup in turn three brought out the caution on lap three involving Greg Martin, Jonathan Reid, and Kevin Wills. DiPietro would take the lead on the restart with Dave Flannigan Jr taking second away from Cain with Austin Susice and Derrick Borkenhagen racing inside the top five. Dave Conant came to a stop on the front straightaway on lap six to bring out the caution for the third time in the event. James Henry took third place away from Austin Susice on lap nine and began to chase down the top two. DiPietro was on cruise control, having over a five second lead over the field, just before Chase Matteson spun in turn three to bring out the caution with five laps remaining. DiPietro would keep the lead off the restart as Matt Farnham took third away from James Henry and then took second from Dave Flannigan. Dave DiPietro scored his first career Investors Service Sportsman feature. Matt Farnham, Dave Flannigan, James Henry and Brett Martin completed the top five.

Orville Harris and Zack George shared the front row for the Stevenson’s Hardware Novice Sportsman with George taking command of the field. Cameron Tuttle took second away from Harris on lap five and quickly went after George for the lead. Tuttle went underneath George and would take the lead away on lap six. Zack George came to a stop, in turn, one to bring out the caution on lap eight. Tuttle would hold off Robbie Johnston to score his first Novice Sportsman win at Ransomville in 2017.

Chad Desso and Howard Guthrie brought the field of Gippster’s Collision 4 Bangers to the green flag for their 15 lap feature with Guthrie jumping into the lead with Ashley Bleich battled Desso for second. Anthony Guthrie slowed entering turn one to bring out the races first caution on lap three. Off the restart, it was Chad Desso showing the lead. Cole Susice spun on the backstretch to bring out the caution on lap four. Desso continued to show the way with Chris Leone taking second and reeling in the leader. Desso would hold off Leone to score the win. Howard Guthrie, Ryan Plante, and Chuck Cala completed the top five.

The 60th season of racing at the Big R will continue on Friday, June 16th as WGR 550 and Wraptile Graphics presents a full card of racing plus double features for the Street Stocks and Novice Sportsman. Gates will swing open in the pits at 5:00 pm with grandstands opening at 6:00 pm with racing action starting at 7:15 pm.