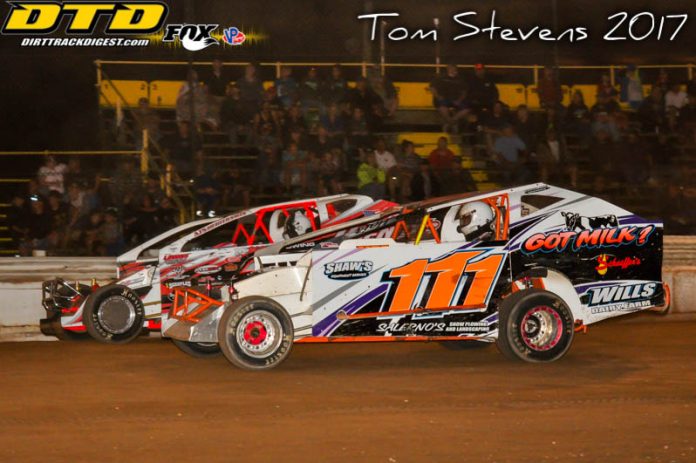 The Wills family shared the front row for the Krown Undercoating Modifieds feature as Allan and Kenny brought the field to the green flag with Allan showing the way over Cousin Kenny with Jeff McGinnis, Scott Kerwin and Erick Rudolph racing in fifth. Jim Zimmerman slowed on the front straightaway on lap six to bring out the races’ first caution period. On the restart, Allan Wills would regain the lead as the man on the move was “The Ransomville Renegade” Ryan Susice as he raced by McGinnis and Rudolph to enter the top five, racing in fourth place. Kenny Wills would start to reel in his Cousin Allan at the halfway mark with Kerwin in third, Rudolph and Susice racing in the top five with Pete Bicknell racing in sixth place. Bicknell would pass Susice to take over fifth on lap 20. Tommy Flannigan would bring out the caution on lap 22 with a flat right rear tire. On the restart, Allan Wills would take off in the lead, but the battle was on behind him between Pete Bicknell and Erick Rudolph for fourth place. Allan Wills would lead every lap from start to finish in route to his first career victory. Kenny Wills, Kerwin, Rudolph and Pete Bicknell completed the top five.

Justin McKay and Brett Martin led the Investors Service Sportsman to the green flag for their 25 lap feature with Martin showing the way with McKay, Noah Walker, Kevin Wills and Dave DiPietro racing in the top five early on. “Oh Henry” James Henry raced underneath DiPietro to take over fifth on lap four and then went after Kevin Wills for fourth place, as the top three started to pull away from the field. Chris Burek slowed on the back straightaway to bring out the caution on lap six. On the restart, Brett Martin held the lead with Kevin Wills, Brett Senek, McKay and Henry raced inside the top five. Kevin Wills would take the lead from Martin exiting turn four on lap eight. Brett Senek would take second away from Martin just one lap later. Dave Conant spun, in turn, one to bring out the caution on lap 10. The lap 10 restart saw Wills take command with Senek, Henry, Jonathan Reid and Brett Martin in the top five. AJ Custodi’s motor went up in smoke on lap 12 to bring out the caution for the third time of the event. Brett Senek would take the lead away from Wills on the restart at the halfway point, just as current points leader Matt Farnham entered the top five after going three wide with Martin and Reid to move into fourth. Senek and Henry opened up their lead over the rest of the field in the closing stages of the main event and Senek would go on to score the win, his second of the season. Henry, Wills, Farnham and Brett Martin would complete the top five.

Anthony Hermanson and Cole Susice led the Gippsters Collision 4 Bangers to the green flag for their regularly scheduled 15 lap feature with Cole Susice jumping into the lead. Chad Desso quickly worked his way into third at the end of lap one after passing Ashley Blech. Desso made contact with the turn one wall after being involved in some contact with Anthony Hermanson to bring out the caution on lap three. On the restart, Brandon Potter and Steve Matson hit the turn one wall to immediately bring the caution flag right back out. That would put Susice and Chris Leone on the front row. On the lap four restart, Susice would continue to show the way over Leone. Ashley Blech would reel in Leone but the lead duo of Susice and Leone would continue to pull away from the rest of the field. Leone would look underneath Susice coming off turn two on lap 12 but Susice would out-drive Leone. Susice would hold off Leone to score the win.


Chris Leone regained command of the field of the 4 Banger main event that was originally started last Friday night, July 7th. Leone would pull away from Ashley Blech and Cole Susice to grab the victory, his second of the season. Susice, Blech, Chad Desso and Chris Miller completed the top five.

Cliff Gregg and qualifying winner David Fingerlow brought the Stevenson’s Hardware Novice Sportsman to the green flag with Gregg showing the way. Off a lap one caution, Cameron Tuttle would take over the lead with Fingerlow moving into the second position, sending early race leader Cliff Gregg back to third place. Tuttle would pull away from the field to score the win, his fourth of the season.

NEWS AND NOTES: 74 cars signed in pitside It was just announced that the winner of the John Susice Memorial for the Street Stocks on Friday, July 28th, will be a guaranteed starter into the King of the Hill Street Stock 100 on Saturday, September, 16th. The John Susice Memorial is open to any Humberstone, Merrittville or Ohsweken legal Street Stocks to race against the Ransomville regulars. The annual Kid’s Power Wheel Races was once again a big hit with the youngest race fans that took part.

Next weekend is a big racing doubleheader weekend at the Big R! Friday, July 21st will be the 60th Anniversary Celebration. Many of the drivers that shaped Ransomville into what it is today will be on hand. Gates will swing open in the pits at 5:00 pm with grandstands opening at 6:00 pm with racing action starting at 7:15 pm. Then on Sunday, July 23rd, Budweiser presents the Big R Outlaw Shootout featuring the Craftsman World of Outlaw Sprint Cars plus a special $750 to win event for the Investors Service Sportsman. Pit gates will open at 1:00 pm with the Will Call Window opening at 2:00 pm. Grandstand gates will swing open at 4:00 pm with racing getting underway at 7:00 pm