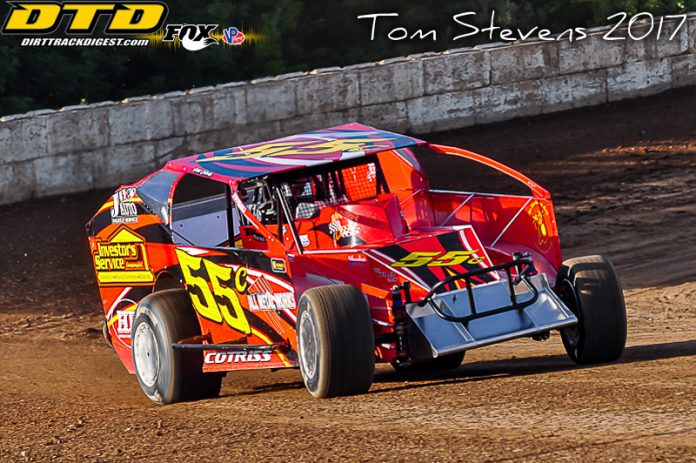 The John Susice Memorial for the KiPo Chevrolet Street Stocks were led to the green flag by Mike Kramarz and Jordan Moden with Kramarz leading the opening circuit with Moden, Jaren Israel, Dave Bailey and Ken Camidge racing in the top five. The battle was on for third as Dave Bailey passed Israel for third and then went after Moden for second and would take over the runner up spot on lap six. Bailey and Kramarz would battle for the lead and would complete the pass going down the back stretch on lap seven to take over the lead. Casey Jonathan spun in turn three to bring out the races first caution on lap 11. The great run for rookie driver Jordan Moden came to an end under the lap 11 caution period after coming to a stop in turn four. On the restart, Bailey would jump into the lead as Kramarz battled with Israel for second as Rob Murray and Pete Stefanski raced for fourth place. Kramarz would clear that battle for second with Murray, Stefanski, and Israel went three wide for a whole circuit with Murray moving into third. Murray would take second away from Kramarz and would start to chase down race leader Dave Bailey. Vince Fargnoli spun in turn two to bring out the caution on lap 19, erasing Bailey’s half-straightaway lead over Murray and the rest of the field. On the restart, Murray looked underneath Bailey for the lead but Bailey would hold him off with ten laps remaining. Bailey, Murray, Israel, Stefanski, and Kramarz raced in the top five in the remaining circuits, with Murray and Bailey battling for the lead. The pair of Canadians went side by side for several circuits. Murray would take the lead away from Bailey with five remaining, but Bailey would regain the lead coming off turn two. Casey Jonathan leaked fluid on the race track to bring out the caution with three laps remaining. On the restart, Bailey would catch Murray and hit the turn four wall with a flat right front tire. Jake Stefanski and Brian Monahan came together on the front straightaway to bring out the caution with one lap remaining. Murray would hold off Israel to score the win. Billy Bleich Jr used Austin Hauser’s car for the feature after blowing a motor on his “X Factor” ride during qualifying race action.

The Krown Undercoating Modifieds were brought to the green flag for their 30 lap feature by Jim Zimmerman and Jesse Cotriss with Cotriss jumping into the lead with Zimmerman, Scott Kerwin, Ryan Susice and Steve Lewis Jr racing inside the top five early. Cotriss would open his lead over Kerwin on lap six by nearly 3.5 seconds. Cotriss would catch lap traffic by lap ten while the closest battle on the speedway was for fourth place between Steve Lewis, Rick Richner, and Pete Bicknell. At the halfway mark, Cotriss’s lead was up to nearly six seconds. Meanwhile, Bicknell passed both Lewis and Richner to move into fourth place. Susice would pass Kerwin to move into second with five laps remaining. Cotriss would pull away from the field and would lead every lap from green to checker to score his second win of the season nearly a month after winning his first career Modified victory. Susice would settle for second followed by Kerwin, Bicknell, and Erick Rudolph completing the top five.

Jim Harbison and Darrell Borkenhagen shared the front row for the Investors Service Sportsman feature with Harbison showing the way. Borkenhagen slowed exiting turn two and bounced off the wall that caused a multi-car incident on the back straightaway that also involved Mike Williams, James Henry, Kevin Wills, Eddie Cain, Austin Susice, Bryan Harris, Chase Matteson, Dave Conant and Justin McKay. Henry, Cain, and Wills were able to rejoin the field for the lap two restart. All drivers were okay. The restart would see Harbison with Dave DiPietro, Derek Wagner, Dave Flannigan Jr and Noah Walker racing in the top five. Matt Farnham would pass Flannigan to enter the top five on lap five to go and started to go after Noah Walker. Farnham would continue to move towards the head of the class after passing Walker on lap eight. Wagner would take second away from DiPietro on lap nine and began to go after race leader Jim Harbison. Farnham would go after DiPietro for third place with Noah Walker running tightly behind Farnham. Farnham would lose the handle of his number 7 in turn one but would continue on, losing only three positions. The battle for the lead was highly contested between Harbison and Wagner. Harbison would hold off Wagner to score his first career Sportsman victory. Greg Martin with his 17th place finish received a new Hoosier Racing Tire.

Ashley Blech and Cole Susice brought the Gippsters Collision 4 Bangers to the green flag for their 15 lap event with Susice getting the lead exiting turn four on the opening circuit. Susice would check out on the field as Blech was holding the second position over Chad Desso, Chris Leone, and Nick Tarnowski. Leone would take third away from Desso on lap six and then would go after Blech for second place. Leone would then pass Blech to take second away on lap nine, as Susice checked out on the field. Cole Susice would drive on to score the win, his third of the season.


Bubby Pawlak and qualifying event winner David Fingerlow were on the front row for the 15 lap feature for the Stevenson’s Hardware Novice Sportsman with Fingerlow leading the field around the Big R for the first time. Pawlak led Cameron Tuttle, Kyle Wendt, and Orval Harris early on. Tuttle would challenge Pawlak for second for several circuits with Tuttle moving into second place on lap six. Fingerlow opened up his lead over the field with Tuttle trying to reel in the leader. Tuttle caught the leader Fingerlow while working lap traffic but lost control and ground on the leader with three laps remaining. Tuttle would catch Fingerlow on the back straightaway and would lead entering turns three and four but Tuttle lost power coming to the checkered flag and it was Fingerlow getting the win over Tuttle by .015 of a second.

The 60th season of racing will continue on Friday, August 4th as Performance Mfg and Jeffery Machine presents the $1,000 to win Sid Jeffrey Memorial for the Investors Service Sportsman. The “Thunder on the Dirt” Series for Vintage Cars will be on hand as well. They will be joined by the Modifieds, 4 Bangers and Novice Sportsman.

About Ransomville Speedway:  Ransomville Speedway is located on Braley Road in the hamlet of Ransomville, just 20 minutes from Niagara Falls and Lockport. “The Big R” is a ½-mile DIRTcar sanctioned facility that is the Home of the Summer Nationals. Ransomville also features a 1/16th -mile Go-Kart track for action on the “Little R” on Thursday nights! For more information, please visit us on the World Wide Web at www.ransomvillespeedway.com  as well as follow us on Twitter @Ransomville and like us on Facebook. You can also contact the speedway by phone by calling (716) 791-3602 or (716) 791-3611.