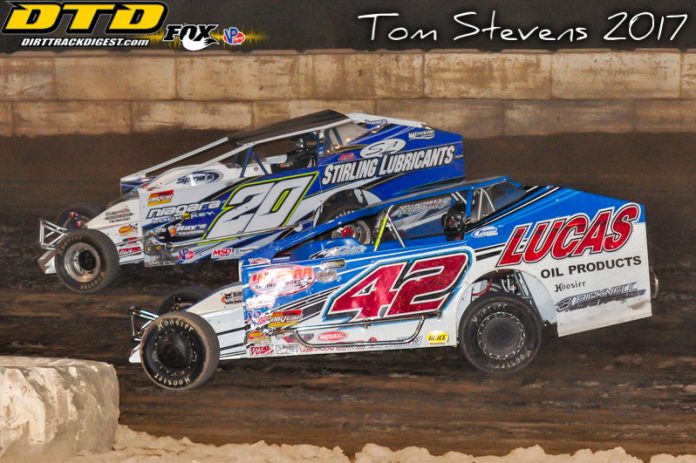 RANSOMVILLE, NY – Jeff McGinnis held off a charging Pete Bicknell for the 358-Modified victory on Monday night to score his first Ransomville checkered flag of the season.

John Smith took command at the drop of the green for the 30-lap affair, darting out to a quick lead. McGinnis slipped by the other front row starter, Steve Lewis, for second early. Then, Lewis surrendered the third spot to Pete Bicknell on lap six. From there, the duo of McGinnis and Bicknell chipped away at the lead Smith had created, closing to Smith’s rear bumper with ten laps completed.

On lap 12, a top-to-bottom crossover move coming out of turn two propelled Jeff McGinnis to the lead, with Bicknell following through just a lap later with a slide job on Smith. As both of the top two inched away from Smith, Bicknell drew ever closer to the McGinnis machine, lurking in his tire tracks for much of the middle portion of the event. While Ryan Susice reached third on lap 18, he was entirely too far behind the leaders to make a run without a caution.

With seven laps remaining, Pete Bicknell took his first stab at the lead, drawing even with McGinnis through turns three and four. As the pair raced down the frontstretch, McGinnis ducked low to pass a lapped car. The leaders were able to get by without any contact, but McGinnis held on to the lead, but now using a new line. McGinnis noticed Bicknell was able to gain time running the bottom through turns three and four, and altered his line to mirror Bicknell. Throughout the final five laps, Bicknell was unable to generate the run he previously had, and Jeff McGinnis raced to his first Ransomville win of the year. Bicknell crossed in second, followed by Susice, Erick Rudolph, and Tommy Flannagan.


In the Sportsman feature, Kevin Wills and Garrison Krentz battled for the win throughout the back half of the event, with Wills narrowly crossing the line in front. Behind them, Derek Wagner edged out Matt Farnham for third in what proved to be the most important pass of the night. While Wagner crossed the line in third, both Wills and Krentz came up light on the scales, handing the win to Wagner. Likewise in the Street Stock main, Billy Bleich Jr. cruised to the win in the caution-free event, but the win was given to Jake Stefanski after Bleich’s DQ. Ryan Plante walked to the win in a wild 4-Cylinder event, and Cameron Tuttle did the same in the Novice Sportsman event. Unfortunately for Tuttle, he made hard contact with the turn one wall after taking the checkered, but made repairs to make it to victory lane at a later time.

About Ransomville Speedway: Ransomville Speedway is located on Braley Road in the hamlet of Ransomville, just 20 minutes from Niagara Falls and Lockport. “The Big R” is a ½-mile DIRTcar sanctioned facility that is the Home of the Summer Nationals. Ransomville also features a 1/16th -mile Go-Kart track for action on the “Little R” on Thursday nights!