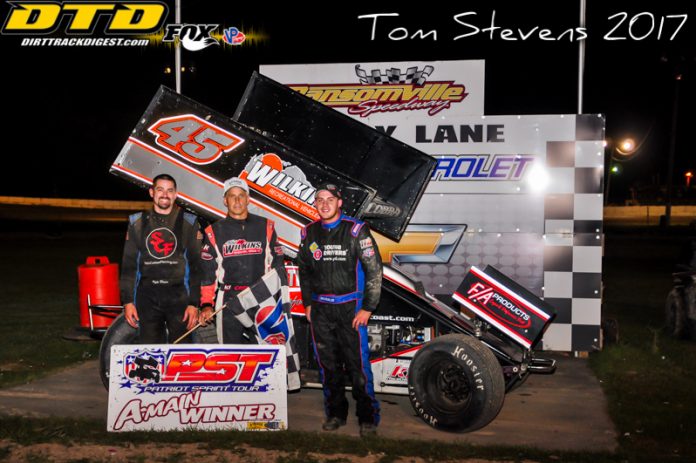 Jordan Thomas and “The Cobra” Chuck Hebing brought the A-Verdi Storage Containers Patriot Sprint Tour to the green flag for their 25-lap A-Main with Thomas into the lead with Hebing, Scott Just, Kyle Drum and Steve Collins in the top five early on. Hebing would look to the outside of Thomas exiting turn two to take the lead away on lap three. Ryan Susice would take sixth away from Jared Zimbardi and Darryl Ruggles as they went three wide exiting turn two on lap four. Susice would continue his trek towards the front as he passed Just and Collins to move into the fourth position on lap six. Kyle Drum would catch Jordan Thomas for second and would battle on lap eight, just as Hebing would catch lap traffic. Josh Azzi spun in turn three on lap eight to bring out the races first caution. The restart would see Hebing up front as Drum continued to battle Thomas for second. Drum would move into the runner up position on lap 11 and would start to head towards race leader Hebing. Ryan Susice would take third away from Thomas exiting turn four on lap 11. Ryan Susice would pass Drum to take over the runner up spot on lap 14, as Hebing started to pull away from the field. Hebing would pull away to score the win. Susice, Drum, Jared Zimbardi and Jordan Thomas completed the top five.

Dustin Gorhan and Anthony Muscato led the field of Investors Service Sportsman to the green flag for their 25-lap feature with third place starter Eddie Cain leading the opening circuit. Derrick Borkenhagen spun in turn two to bring out the races first caution on lap three. Dustin Gorhan would spin in turn one to bring out the caution with Greg Martin, Derek Wagner and Noah Walker also involved. Martin, Wagner, and Walker would all drive under their own power to the pits. The lap four restart would see Brett Senek taking the lead. Chase Matteson would spin in turn one and would be collected by Derrick Borkenhagen and Derek Wagner to immediately bring out the caution. Senek would pull away on the restart as Cain, Anthony Muscato and Dave DiPietro went three wide for second on the restart. Noah Walker slowed on the front straightaway on lap six to bring out the races’ fourth caution. Senek would be in control of the field as Kevin Wills passed Cain to take second away on lap seven. Ed Cain’s strong run would come to an end on lap nine as he spun in turn one, collected Brett Martin and Derrick Borkenhagen. Senek and Wills would pull away on the restart over DiPietro and Matt Farnham as James Henry battled with Chris Burek for fifth on lap 10. Farnham would pass DiPietro to take third away on lap 11, just as Wills would battle Senek for the lead, with Farnham right there as well. Wills would take the lead entering turn three and would clear Senek on lap 15 for the lead. Wills would start to open up his lead over Senek and Farnham late in the event. Wills would go on to score the win, his first of the season. Senek would hold off Farnham with DiPietro and Greg Martin completing the top five.


Jordan Moden and Pat O’Keefe were on the front row for the 20 lap feature event for the KiPo Chevrolet Street Stocks with O’Keefe showing the way. Moden got loose and spun in turn three and collected a few others with Pat Dell getting the worse of the incident, including losing the left rear tire, among other damage. The lap one restart would see Ken Camidge jump into the lead with Pete Stefanski, Billy Bleich, Jake Stefanski and Jaren Israel raced in the top five. Pete Stefanski would challenge Camidge for the lead and made contact, with Stefanski taking the lead on lap three. Bleich would battle with Stefanski for the lead as Jake Stefanski raced his way in third at the halfway mark, and the top three battled for the lead. Bleich would use the inside of turn four and would power underneath Pete Stefanski to take the lead on lap 11. Jake would go by his Uncle Pete to take over second with seven laps remaining and would start to go after Bleich. Jake Stefanski would catch Bleich and would battle on the outside for the lead in the final three circuits. Stefanski would take the lead down the back straightaway on the final circuit and would hold off Bleich to score his third straight win in the division.

Robbie Johnston and Bubby Pawlak brought the Stevenson’s Hardware Novice Sportsman to the green flag for their 15-lap feature event with Pawlak quickly getting into the lead. Pawlak would quickly open his lead to over a half-straightaway at the halfway point over Robbie Johnston, Cameron Tuttle and Kyle Wendt. The closest battle on the speedway was for second between Johnston and Tuttle as Pawlak would open the lead. Johnston would clear of Tuttle with three laps remaining and would begin to reel in Pawlak. Pawlak would go on to score his first career Novice Sportsman feature.

NEWS AND NOTES:  72 cars signed in pitside. Chad Desso and Nick Tarnowski came across the line in their qualifying heat Sponsorship laps are now available for the Street Stock and Sportsman King of the Hill 100 lap features as well as the final Modified race of the season on September 1st. Contact the speedway office to sponsor your laps today!

Racing will continue next Friday, September 1st as Labatt’s, Salerno’s Snowplowing and Tim Hortons presents the 50 Lap Krown Undercoating Modified Special plus a Full Card of Racing. Ransomville track titles will be on the line for the Modifieds and Sportsman. The pit gates will open at 5:00 pm with grandstands at 6:00 pm with showtime at 7:15 pm