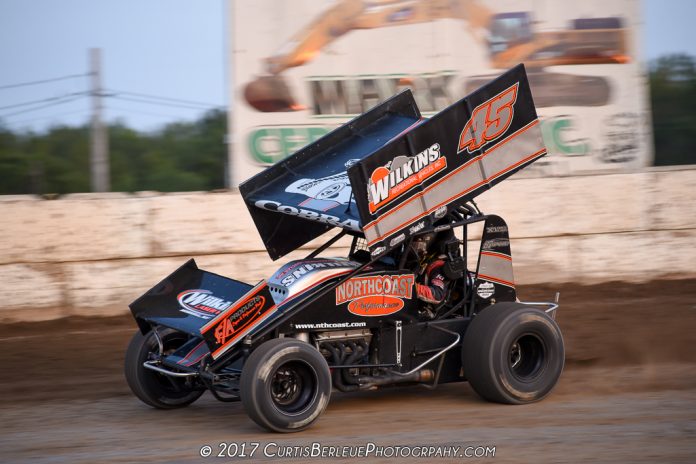 RANSOMVILLE, NY – Chuck Hebing made it look easy Friday night at the Ransomville Speedway scoring his first Patriot Sprint Tour win of the 2017 season over Ryan Susice and Kyle Drum.

Coming off his first ever win last week at Orange County Fair Speedway, Jordan Thomas would bring the field to the green along side Hebing. However, Hebing fired before Thomas in the starters box drawing a yellow and would subsequently be penalized two spots.

Also wasting no time getting to the front was Kyle Drum, who started seventh and was up to third by lap three. Drum would battle Thomas for the runner up spot for next six laps prior to a caution that involved Josh Azzi spinning on the top of turn three on lap eight.

Hebing would lead Thomas, Drum, Ryan Susice, and Scott Just to the green on the ensuing restart. On lap 11, Drum was finally able to get by Thomas to take the runner up spot, and Susice was able get by Thomas to grab third.


A strong battle for the fifth spot continued between point Leader, Jared Zimbardi, Steve Collins and Darryl Ruggles. Unfortunately for Ruggles, his night would end early on lap 14 due to a mechanical failure pulling into the infield.

With Hebing continuing to pull away, a very tight contest inside the top five continued between both Drum and Susice with Jared Zimbardi not too far behind. Susice would grab second but the battle between Zimbardi and Drum went to the final turn with Drum just barely holding off his brother in law securing the final podium spot.

No driver had anything for the Cobra and he was able to pick up first PST win of the season over Susice, Drum, Zimbardi and Jordan Thomas the top five.

Steve Collins would start third but would continue to fall back in position throughout the 25 lap A-Main going home with a seventh-place finish. Josh Azzi took home his first Evingham Site Excavation Dash win of the season.

Sammy Reakes IV had a very slow start to the night sustaining heavy front end damage during his qualifying heat, he would come home with a sixth-place run and earn him the Casey’s Truck Salvage ‘Salvage of the Night’ award. Derek Jonathan would take the Prestige Pool & Spa final finisher award and Pete Richardson would take the Shuttleworth Asphalt Sealing 11th place bonus.

The Patriots make up an event at the Mercer Raceway Park tonight part Bonnell’s Collison Center Western Weekend which pays $4,000 to win and $325 to start. Be sure to visit www.patriotsprinttour.com and to like ‘Patriot Sprint Tour’ on facebook and follow @PatriotSprints at twitter and Instagram. 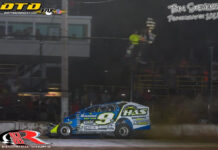 Super DIRTcar Series Back at Ransomville for 37th Summer Nationals