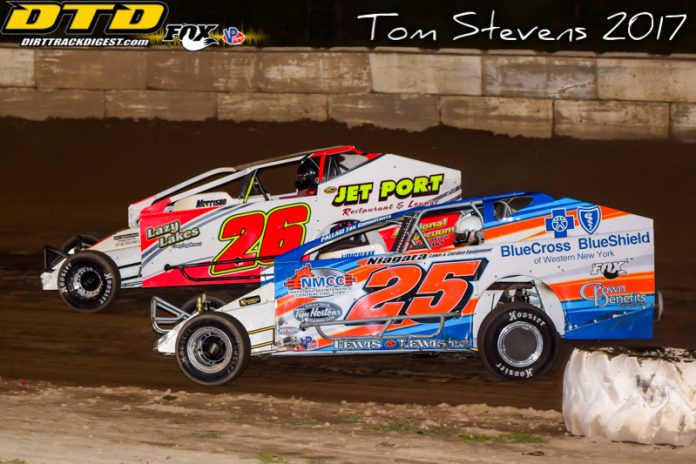 Allan Wills and cousin Kenny Wills brought the field of Krown Undercoating Modifieds to the green flag for their 50-lap season finale with Allan Wills showing the way early on. Erick Rudolph quickly moved up through the field to battle with Rick Richner for third place, with Pete Bicknell racing in fifth place. Bicknell and Rudolph battled for fourth place for several laps with Bicknell moving up to third place at the start-finish line on lap 10. Tommy Flannigan spun, in turn, one after hitting a ute tire to bring out the first caution on lap 11. On the restart, Wills would jump back out front with Bicknell and Rudolph continued their battle for the runner-up spot, with Rudolph taking it away from “Mr. Small Block” on lap 12. Rudolph would close in on Wills and Wills would bobble exiting turn two on lap 21, giving the lead to Rudolph with Bicknell in second. Ryan Susice would enter the top five for the first time in the event on lap 22. Rudolph and Bicknell would start to hit lap traffic with 20 laps remaining. Bicknell slowed and pulled into the pits on lap 36, giving up the runner-up spot. Rudolph would drive away from the field to go on to score the win, his third of the season. With his third place finish, Ryan Susice won his third consecutive track championship. With his eighth place finish, Tommy Flannigan received a new tire from Hoosier Racing Tire.

Dustin Gorhan and Derrick Borkenhagen set the pace in the points-paying finale for the Investors Service Sportsman with Borkenhagen showing the way. Jim Harbison spun in turn two and collected Dave DiPietro and Dave Flannigan Jr to bring out the races first caution. On the restart, Borkenhagen continued to show the way with Noah Walker, Chris Burek, Matt Farnham and Gorhan racing in the top five. The battle for second tightened up on lap six as Chris Burek and Farnham caught second place running Noah Walker. Burek would take second away on lap seven, with Farnham taking third away from Walker. AJ Custodi, Tony Muscato, and Mike Williams got together in turn two to bring out the caution on lap seven. Greg Martin would battle with Farnham for third place on lap nine, as Borkenhagen and Burek started to pull away from the field. With Borkenhagen in the lead, Burek and Farnham battled for second place. Farnham would move into second on the final lap but Borkenhagen would score his first win of the season. With his tenth place finish, Dave Flannigan Jr scored a new tire courtesy of Hoosier Racing Tire.


Rookie Jordan Moden and Pat O’Keefe were on the front row for the KiPo Chevrolet Street Stocks feature event with O’Keefe showing the way with Brandon Sherwood and Pete Stefanski racing inside the top three. Pat Dell spun in turn four to bring out the races first caution with just one lap complete. On the restart, Sherwood would take over the lead as Pete Stefanski battled with O’Keefe for the second position. O’Keefe got loose in turn one and Stefanski made slight contact and would do a 360 spin in turn two to bring out the caution on lap four. Jaren Israel would battle with Ken Camidge on the lap five restart, as Brandon Sherwood continued to lead. Jake Stefanski would battle with Israel for third place, as Sherwood and Camidge pulled away at the halfway mark. Camidge would reel in Sherwood with five laps remaining, but Sherwood would hold off Camidge to score the win, his third of the season.

Matt Hornquist and Steve Matson set the pace in the main event for the Gippsters Collision 4 Bangers with Hornquist showing the way early, but it was Chad Desso on the move early, moving into second with Cole Susice moving into third at the end of lap one. The top three quickly pulled away from the rest of the field by lap five, as they led Chris Leone and Chuck Cala by a half-straightaway. Desso and Susice would battle for second place, as Hornquist continued to show the way. Susice would take second away from Desso on lap six, and then would go after leader Hornquist at the halfway mark. The caution would come out on lap nine as Dave Dusseault spun on the back straightaway. Susice, Desso, and Leone would all catch leader Hornquist, but Hornquist would keep the lead. Chris Leone would take second away from Susice and Desso on lap 12. Todd Westmoreland came to a stop in turn four, right in front of the leaders, with leader Matt Hornquist and Chad Desso having nowhere to go. With Hornquist going to the pits, that gave the lead to Chris Leone. Leone would lead the final three circuits to score his fourth win of the season.

Robbie Johnston and Cameron Tuttle were on the front row for the Stevenson’s Hardware Novice Sportsman feature event with Tuttle quickly getting the lead. Tuttle slowed on lap four entering turn one, allowing Johnston and Kyle Wendt to close back in on the leader. Tuttle would stretch his lead by a full straightaway at the halfway mark. Wendt would take second away on lap nine, as Johnston and Bubby Pawlak came together exiting turn two to bring out the races first caution. Tuttle would take off on the restart with Wendt racing in second. Wendt would get loose in turn one and did a barrel-roll. Wendt climbed out of his car and went back to the pits under his own power. Tuttle would drive off into the sunset, and lead the final four laps to score his sixth feature win of the season.

NEWS AND NOTES:   73 cars signed in pitside. In victory lane, Brandon Sherwood thanked fellow competitor Jake Stefanski for some used tires that Brandon drove to victory. Sponsorship laps are now available for the Street Stock and Sportsman King of the Hill 100 lap feature events. Contact the speedway office to sponsor your laps today!

Racing will continue next Friday, September 8th as Niagara Frontier Publications and WGR 550 presents the Sportsman Super DIRTcar Series plus Street Stocks, 4 Bangers, and Novice Sportsman. The Street Stocks Championship will be decided next Friday night. The pit gates will open at 5:00 pm with grandstands at 6:00 pm with showtime at 7:15 pm