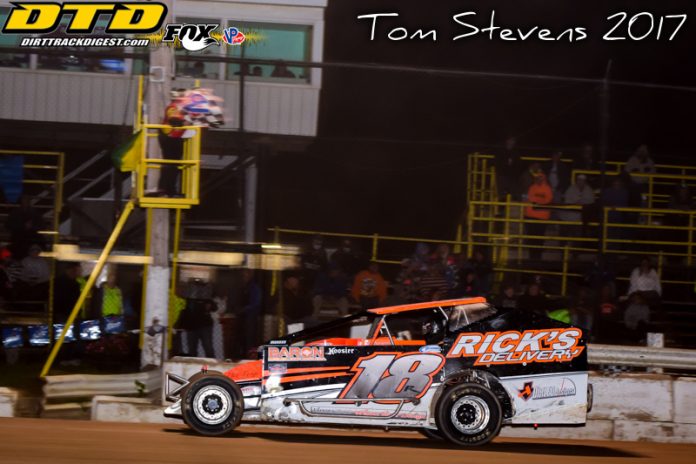 RANSOMVILLE, NY – St. Catharines, Ontario pilot and former Mr. DIRT Sportsman titlist Brad Rouse scored the victory in the 50-lap feature for the Sportsman Super DIRTcar Series on Niagara Frontier Publications and WGR 550 night at the Ransomville Speedway. For Rouse, it was his second win in the Western Region on the Sportsman Super DIRTcar Series Ken Camidge from Niagara Falls, NY won his second feature of the season in the KiPo Chevrolet Street Stocks. Jake Stefanski became the third member of the Stefanski family to earn a track championship, as Jake won his first Street Stock championship. Cole Susice would score his fourth win of the season in the Gippsters Collision 4 Bangers. Kyle Wendt from Ransomville, NY picked up his fourth win of the season in the Stevenson’s Hardware Novice Sportsman.

Ransomville regulars Brett Senek and Derek Wagner were on the front row for the Sportsman Super DIRTcar Series 50-lap feature with Senek in the lead. Andrew Smith battled with Wagner for second as Western Region points leader Brad Rouse, and defending race winner Ron Davis III raced inside the top five. Rouse would pass Wagner exiting turn two on lap five to move into third place. Andy Smith would be all over the rear nerf bar of race leader Senek, but Senek would keep the lead. Smith would take the lead from Senek on lap 12, with Rouse, Wagner and overall fast-time qualifier Greg Martin in the top five. Senek would suffer a flat tire on lap 19 and went into the pits, after giving up second place to Rouse. At the halfway point of the race, Smith would continue to show the way over Rouse, Wagner, Martin, and Cody McPherson mark, Smith, Rouse, Wagner, Martin, McPherson, in the top five. While working lap traffic, Rouse would draw closer to the leader. Rouse would look to the outside and Rouse would take the lead on lap 31, after Smith had issues with lap traffic. The caution would come out for the first time on lap 32 as Chase Matteson spun in turn four. On the restart, Rouse would jump out front with Smith, Martin, Wagner and Ron Davis III in the top five. Matt Farnham, who was recently crowned the 2017 track champion, went into the infield and dropped out of action with 15 laps remaining.

Rouse, Smith, and Martin would pull away from the rest of the field, as Smith would begin to reel in Rouse. Rouse would lead the final 18 circuits to score his first win at Ransomville, and second on the Sportsman Super DIRTcar Series Western Region Tour. Smith would settle for second with Martin, Wagner, and Davis completing the top five. Cody McPherson, Jessica Power, Chris Burek, Dylan Davidson, and Dan Ferguson completed the top 10. Wagner was found to be illegal in post race tech. The Sportsman Super DIRTcar Series will continue their three day Niagara Region swing with stops at Merrittville and Humberstone Speedways this weekend.


Qualifying event winner Brian Monahan and Pat O’Keefe were on the front row for the KiPo Chevrolet Street Stocks feature with O’Keefe jumping into the lead, with Monahan, Pete Stefanski, Chris Dziomba, and Brandon Sherwood raced inside the top five early on. Pete Stefanski took second away from Monahan on lap four and would begin to go after O’Keefe. Pete Stefanski would take the lead on a lap five restart, with point’s leader Jake Stefanski moving into fifth place. After a lap six caution for Pat O’Keefe and Jaren Israel getting together on the back straightaway, Pete Stefanski would continue to show the way with Chris Dziomba running in second place. Ken Camidge would take second from Dziomba on lap ten and would quickly go after race leader Pete Stefanski. Camidge would catch Stefanski entering turn three on lap 11, and would complete the pass on lap 12, just passing the flag stand. Camidge would open up his lead over the field and would go on to score the win, his second of the season. With his fourth place finish, Jake Stefanski would be crowned the Street Stock divisional champion.

Matt Hornquist and Steve Matson brought the field of Gippsters Collision 4 Bangers to the green flag for their main event with Hornquist buzzing into the lead. Something would go a miss on the Hornquist car on lap two, giving the lead to Matson with Ashley Blech taking over second place. Blech would take the lead just one lap later with Cole Susice gaining second place. Susice would battle with Blech for the lead and would complete the pass on lap eight to take the lead. Ashley Blech would bring out the caution with just three laps remaining, erasing the lead that Susice had over the field. Susice would hold off Leone to score his fourth win of the season.

Kyle Wendt and Robbie Johnston shared the front row for the Stevenson’s Hardware Novice Sportsman feature with Wendt taking the lead with Bubby Pawlak and Cameron Tuttle broke out into the top three. Ken Washburn and Rich Blech got together in turn three to bring out the races first caution on lap four. On the restart, Wendt would take off in the lead with Pawlak, Tuttle, Matt Foster and Johnston racing inside the top five. Wendt would open his lead over the rest of the field and would go on to score the win, his fourth of the season.

Racing will continue next weekend, September 15th and 16th as Investors Service presents the annual King of the Hill Weekend! On Friday, September 15, the Sid Jeffery Memorial will be held for the Sportsman presented by Performance Mfg and Jeffery Performance. Plus dash races and qualifying will take place for the Street Stocks for the Saturday King of the Hill 100. The Novice Sportsman and 4 Bangers will race for their track championships on Friday night. Saturday will feature twin 100-lap features for the Sportsman and Street Stocks plus 4 Bangers and Novice Sportsman. The pit gates will open at 5:00 pm with grandstands at 6:00 pm with showtime at 7:15 pm