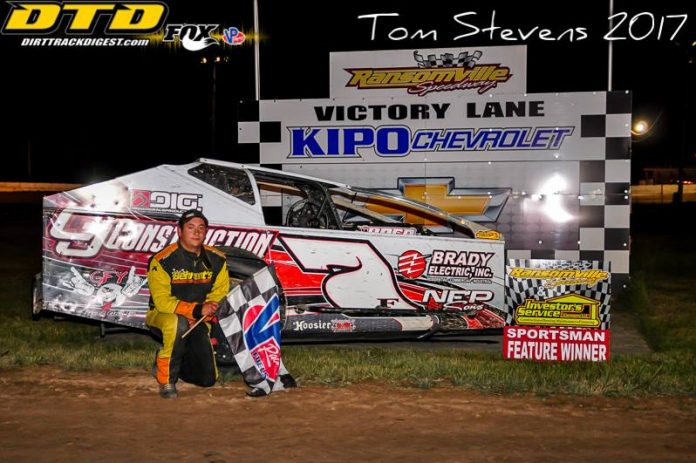 RANSOMVILLE, NY –  2017 Ransomville Speedway Sportsman Champion Matt Farnham scored the win in the Sid Jeffery Memorial for the Investors Service Sportsman presented by Performance Mfg. and Jeffery Machine to cap off night one of the 26th annual King of the Hill Weekend at the Ransomville Speedway. For Farnham, it was his second win of the season. Wheatfield, NY’s Pete Stefanski and Port Colborne, Ontario’s Jason Fontaine won the dash races for the KiPo Chevrolet Street Stocks.  Matt Hornquist from Eden, NY won his first Gippsters Collision 4 Bangers feature of the season while Niagara Falls, NY driver Chris Leone clinched his third divisional title. Kyle Wendt from Ransomville, NY won his fifth Stevenson’s Hardware Novice Sportsman feature of the season, while Wilson, NY’s Cameron Tuttle was crowned the divisional champion.

Chris Burek and 2017 track Champion Matt Farnham brought the field of Investors Service Sportsman to the green flag for the inaugural running of the Sid Jeffery Memorial with Farnham taking command of the field early on. Jonathan Reid spun in turn one and collected Andrew Smith and Derek Wagner to bring out the races first caution on lap two. The restart would see Farnham and Burek out front as Brett Senek raced into third place. The top three would pull away from the rest of the field at the races’ 1/3rd mark as the closest battle on the track was for fourth between Dave DiPietro and James Henry. Greg Martin would spin in turn one to bring out the second caution of the event on lap 12. The mid-race restart would see Farnham and Burek take off out front as Farnham continued to lead at the halfway mark. James Henry would take fourth away from Dave DiPietro on lap 16, as the top three would pull away from the field. Dave DiPietro would bring out the caution with eight laps remaining. Farnham would lead all 30-laps to win the inaugural Sid Jeffery Memorial.

Pete Stefanski and Chris Dziomba led the first KiPo Chevrolet Street Stocks dash to the green flag for the 15-lap event with Pete Stefanski in the lead as 2017 track champion Jake Stefanski moved into second and would battle with his uncle Pete for the race lead. The dueling Stefanski’s and outside pole sitter Chris Dziomba would streak away from Ken Camidge and Billy Bleich Jr. Pete would hold off Jake to get the win, followed by Dziomba, Camidge and Bleich would complete the top five.  The second dash was brought to the green by Jason Fontaine and Vince Fargnoli with Fargnoli taking the lead. Fontaine would regain the lead from his brother in law on lap nine, after dueling with Fargnoli for several circuits. Fontaine would drive away from the field to score the win over Fargnoli, Mike Kramarz, Rob Murray, and Jaren Israel.  The top five in each dash race are locked into the redraw for the Street Stock King of the Hill 100 scheduled forSaturday night.


Matt Hornquist and Ashley Blech brought the field of Gippster’s Collision 4 Bangers to the green flag for their final points race of the season with Hornquist taking command of the field early on. Brendan O’Keefe would bring out the races first caution on lap seven as he was unable to clear the racing surface. Hornquist would show the way off the lap seven restart and Nick Tarnowski battled with Desso for second place, with Tarnowski taking over the runner-up spot, after starting 13thon the grid. Hornquist would drive away from the field to score his first win of the season. With his fourth-place finish, Chris Leone would clinch his third divisional title and fourth career Ransomville track championship.

Orval Harris and Kyle Wendt brought the Stevenson’s Hardware Novice Sportsman point paying finale with Wendt jumping into the lead. Kenny Washburn spun on the front straightaway to bring out the races first caution on lap one. On the restart, Bubby Pawlak spun on the front stretch after contact with Cliff Gregg and Adam Harris had nowhere to go. Gregg was sent to the pits for the remainder of the night. The restart would see Wendt jump out front and would pull away from Orval Harris and David Fingerlow. Bubby Pawlak would take second away from Orval Harris on lap five. Wendt and Pawlak would pull away from the field. Wendt would hold off Pawlak to win his fifth feature of the season.

NEWS AND NOTES:  63 cars signed in pitside on the final Friday night of racing for the 2017 season. The racing program was completed at 10:31 pm.  Chris Burek (18.116sec), Jonathan Reid (18.192sec), and Derek Wagner (18.087sec) set quick time in the group time trials. Wagner’s time of 18.087seconds was the fastest time overall. Novice racer Cody Wolfe hit the turn one wall during qualifying and flipped. Wolfe was able to climb out of the car under his own power. Tickets for the 2017 Night of Champions Awards Banquet will take place on Saturday, November 11th at the Lewiston No. 2 Firehall.

Ransomville will close out the 2017 season on Saturday, September 16th as Investors Service presents the annual King of the Hill Twin 100’s for the Sportsman and Street Stocks. The 4 Bangers and Novice Sportsman will fill out the racing card. Pit gates will open at 4:00 pm with grandstand gates opening at 5:00 pm with racing getting underway at 6:00 pm sharp.

There is just one more race on the 2017 calendar at the Big R and that is on Monday, October 16th as it is the rescheduled World of Outlaw Craftsman Sprint Cars Big R Outlaw Shootout presented by Budweiser. Pit Gates will open at 4:00 pm with grandstand gates opening at 5:00 pm with racing getting underway at 7:00 pm.  Joining the “Greatest Show on Dirt” will be the Sportsman.