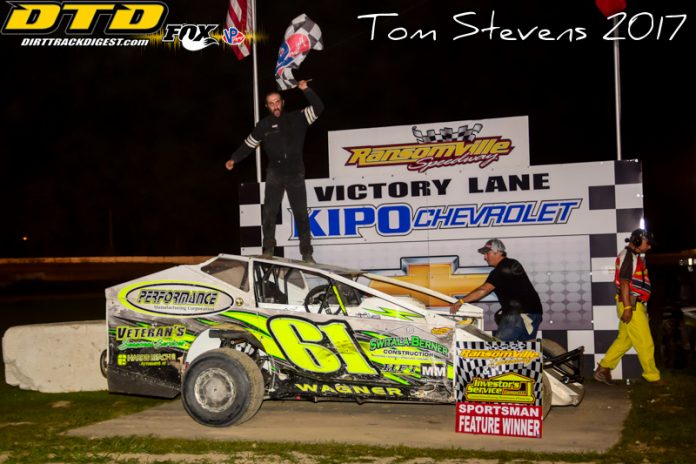 RANSOMVILLE, NY – Middleport, NY’s Derek Wagner scored his biggest win of his career to date as he scored the win in the King of the Hill 100 for the Investors Service Sportsman as Investors Service presented the 26th annual King of the Hill Weekend at the Ransomville Speedway on Saturday night. For Wagner, it was his third win of the season. Pete Stefanski from Wheatfield, NY won the King of the Hill Street Stock 100 for the KiPo Chevrolet Street Stocks. For Stefanski, it was his third win of the season. 2017 track champion Chris Leone from Niagara Falls, NY scored his fifth win of the season in the Gippsters Collision 4 Bangers. “Mr. Clean” Rick Blech from Ransomville, NY won the main event for the Stevenson’s Hardware Novice Sportsman.

“Hot Wheels” Greg Martin and Derek Wagner brought the field of Investors Service Sportsman to the green flag for the King of the Hill 100 with Wagner into the lead with Martin and Matt Farnham running in the top three. Farnham would then pass Martin to take second at the start-finish line on lap two, as Andrew Smith and Brett Senek raced in the top five. “The Lockport Laser” Andrew Smith would reel in Martin for third place during the races early stages. Orval Harris spun in turn four on lap 12 to bring out the races first caution. On the lap 15 restart, Wagner, and Farnham would continue to hold the top two spots as Andrew Smith passed Martin to take over third place. Smith would take second on lap 18 exiting turn four after Farnham jumped the cushion. The second caution of the race would come out on lap 19 as David Fingerlow spun in turn one. The restart on lap 22 would immediately bring the caution back out as AJ Custodi spun in turn one and collected Orval Harris. The greens would fly one more time on lap 26 as Wagner would take the lead as Smith, Martin, Farnham and Chris Burek raced inside the top five. Martin would hop the cushion, in turn, four on lap 34, and allowed Farnham to regain the third position, with Burek taking fourth away from Martin. The leaders would hit lap traffic on lap 41 and allowed Smith and Farnham to reel in the leader Wagner. The caution would come out on lap 48 as Cameron Tuttle got into Orval Harris while working lap traffic to slow the field down for the third time on the night. The restart on lap 53 would see Wagner, Smith, Farnham, Burek, and Martin in the top five as Dave DiPietro battled with Brett Senek for the sixth position. Farnham would reel in Smith on lap 65, as Wagner started to open up his lead. The leaders would hit lap traffic with 30 laps remaining, and Farnham would take second place while in lap traffic on lap 74, and would quickly reel in Wagner. Farnham would look underneath Wagner for the lead with 20 laps remaining, but Wagner would keep the lead. Wagner and Farnham would battle for the win as they pulled away from the rest of the field. Farnham would look underneath Wagner with seven laps remaining, but Wagner would keep the lead. Wagner would hold off Farnham to score the win, the biggest win of his Sportsman career.

”Showtime” Jaren Israel drew the pole position for the King of the Hill 100 for the KiPo Chevrolet Street Stocks and accepted a $250 challenge to for-go on his pole position to start at the rear of the field. With Israel starting at the back, Pete Stefanski and Mike Kramarz would lead the field of Street Stocks to the green flag for the main event with Stefanski showing the way. The first caution would come out on lap two as Dan Korpanty spun in turn one and collected Jordan Moden. The restart on lap five would see a Stefanski family reunion on the front row as Pete was joined by nephew and 2017 divisional champion Jake Stefanski with Jake taking the lead on lap six. Jason Fontaine would take third away on the restart and would start to reel in the Stefanski’s. Pete would regain the lead from Jake on lap eight, as Fontaine continued to hound the top two. Jake would regain the lead from Pete on lap 11, as the Stefanski’s would battle for the lead, with both Jake and Pete exchanging the lead. The races’ second caution would come out on lap 17 as Kevin Kocarik and Randy Zimmerman got hooked together in turn two. The restart on lap 21 would see Jake Stefanski in the lead as Rob Murray took third away from Jason Fontaine, and would challenge the Stefanski’s. Vince Fargnoli would bring out the races third caution on lap 26 after having a fire underneath the car. Jaren Israel would be scored in 10th position on lap 26, moving up eleven spots from the beginning of the event. On the lap 31 restart, Pete Stefanski would regain the lead from Jake, and exiting turn four Pat Dell spun and collected Casey Jonathan. Jason Fontaine would suffer a flat right front tire on lap 33 while running in fourth place. Jaren Israel would move up into sixth place on lap 35 and would go after Brandon Sherwood to enter the top five. “Showtime” would clear Sherwood on lap 37 to move into the fifth position. Sherwood would pass Israel to regain the fifth spot just one lap later. At the lap 50 mid-race break, Jake would lead Pete with Murray, Chris Dziomba, and Brandon Sherwood raced inside the top five.

The field would go back to the green flag for the final 50 laps with Jake Stefanski back ahead of Uncle Pete as Murray, Dziomba, and Sherwood raced in the top five. Dziomba would pass Murray to move into third place on lap 56. The lap 60 restart would see Jake Stefanski back in command as Jaren Israel continued to work his way back up through the field as he was running in the seventh spot, battling with Billy Bleich Jr. Backup in the top five, Rob Murray would challenge Dziomba to regain the third spot as Pete Stefanski would regain the lead from nephew Jake on lap 66. Jake would regain the lead just one lap later. Pete Stefanski would once again regain the lead from Jake on lap 75, with Jake challenging for the top spot. Rob Murray would break with 21 laps remaining, ending his strong run in fourth place. The leaders would hit lap traffic with 20 laps remaining for the first time all night. Brandon Sherwood would pull off with 18 laps remaining, giving up a top-10 effort. Third place running Chris Dziomba spun in turn two to bring out the caution with 11 laps remaining. The lap 92 restart saw Pete lead Jake and the balance of the field. Brian Monahan tagged the turn one wall with one lap remaining to bring out the caution. Pete Stefanski would hold off Jake and the field to score the King of the Hill Street Stock 100.

Chad Lederhouse and Chad Desso were on the front row for the 15-lap feature for the Gippster’s Collision 4 Bangers with Desso showing the way early on. 2017 track champion Chris Leone would take the lead away from Desso on lap five and would open up the advantage over the rest of the field. Leone would go on to score the win, his fifth of the season.

Rick Blech and Adam Harris set the pace in the 12-lap feature for the Stevenson’s Hardware Novice Sportsman with Blech showing the way “Mr. Clean” would lead all twelve laps to get the win, his first of the season over Adam Harris and Cody Wolfe.

NEWS AND NOTES: The racing program was completed at 10:04 pm. Tickets for the 2017 Night of Champions Awards Banquet will take place on Saturday, November 11th at the Lewiston No. 2 Firehall.

The cars and stars of the World of Outlaws Craftsman Sprint Cars will return to the Big R on Monday, October 16th for the rescheduled Big R Outlaw Shootout presented by Budweiser. The Investors Service Sportsman will also be on the card. Pit gates will swing open at 4:00 pm, with grandstand gates opening at 5:00 pm and racing getting underway at 7:00 pm. 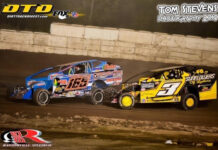