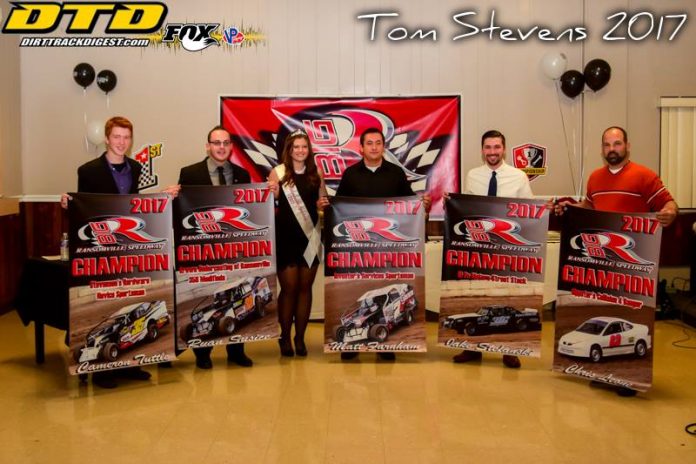 RANSOMVILLE, NY – The Ransomville Speedway closed out the 2017 season with the annual Awards Banquet at the Lewiston #2 Fire Hall. Track announcer Rick Mooney served as the Master of Ceremonies.

For the third consecutive season, “The Ransomville Renegade” Ryan Susice from Ransomville, NY was once again sitting at the head table for winning the Krown Undercoating 358 Modified track championship. Erick Rudolph, Pete Bicknell, Jeff McGinnis and Scott Kerwin rounded out the top five in points. Rudolph visited victory lane three times in 2017, with Bicknell and Jesse Cotriss with two wins each. Alan Wills, Tommy Flannigan, Jeff McGinnis and Susice all visited victory lane on one occasion.

In Special events at Ransomville, Tim Schaffer won the return visit by the World of Outlaws Craftsman Sprint Cars. “Super Matt” Matt Sheppard was victorious in the Summer Nationals for the Big Block Modified Super DIRTcar Series. Steve Collins and Chuck Hebing won the visits by the Patriot Sprint Tour.

More than 300 truckloads of new clay will be added to the racing surface last week and will be worked in and ready to go for the 2018 Test, Tune and Time. Ransomville Speedway General Manager Jenn Martin addressed the crowd on hand discussing the plans for the 2018 season at the Big R. The Modifieds and Sportsman will once again be under the DIRTcar Northeast banner. Rules meetings for the 4 Bangers and Street Stocks will be announced in the near future to discuss any possible rule changes. Stay tuned to the website and the track’s social media pages for dates and times.
About Ransomville Speedway: Ransomville Speedway is located on Braley Road in the hamlet of Ransomville, just 20 minutes from Niagara Falls and Lockport. “The Big R” is a 3/8th-mile DIRTcar sanctioned facility that is the Home of the Summer Nationals. Ransomville also features a 1/16th -mile Go-Kart track for action on the “Little R” on Thursday nights! For more information, please visit us on the World Wide Web at www.ransomvillespeedway.com as well as follow us on Twitter @Ransomville and like us on Facebook. You can also contact the speedway by phone by calling (716) 791-3602 or (716) 791-3611.