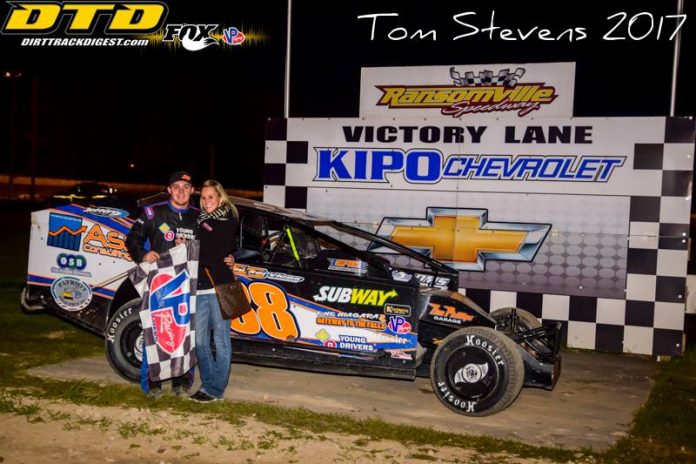 RANSOMVILLE, NY – When the Ransomville Speedway celebrated their 2017 season at the banquet last month, Ryan Susice of Ransomville, NY was celebrating his third straight track championship in the Krown Undercoating 358 Modifieds.

“Winning the third straight title was awesome” stated Susice. “It’s almost surreal to think about the other drivers that have won three straight and know that my name will be listed right with them”. “We need a few more to put us close to what Pete (Bicknell) has” Susice added.

Susice never finished outside of the top six in capturing his third consecutive Ransomville Modified title in 2017, becoming only the fourth driver in Ransomville’s 60 year history to pull off the Modified “three-peat.”  Ryan was also named the Friends of Auto Racing Club (FOAR SCORE) Driver of the Year on Dirt at their celebration this past weekend.

“I wish we could have visited victory lane a few more times at the Big R but it was a really good year otherwise. We had a string of top three finishes that really sealed the deal for us. It also helped to have luck on our side and not get into any wrecks or have any part failures. The only major problem we had was an ignition coil going bad on the final points night and luckily it made it all 50 laps.”

Susice was also busy on the other side of the border on Saturday nights as he drove for the Slack family at Merrittville in the famed 3rs. “We were finally able to get to victory lane at Merrittville this year and that took a huge weight off my shoulders” Susice added. He was in the hunt for the points title at Merrittville and missed one night for his best friend’s wedding. “I was happy with our season in the Slack 3rs. We won two races and had a bunch of other real strong runs . Hopefully we can build on that for next season and battle for a championship at Merrittville in the 3rs.”


“The Ransomville Renegade” also competed in the Jerrid Morphy owned Young Drivers #18 Sprint Car. “Qualifying for my first World of Outlaws Craftsman Sprint Car Series A-Main at Ohsweken and eventually finishing 7th was probably the highlight of the entire season” Susice commented. “Just to be able to compete with those guys was a dream come true, let alone run in the top 10.” Susice also earned a win with the Southern Ontario Sprints at Merrittville and had a fourth-place finish in the Canadian Sprint Car Nationals at Ohsweken. “I wish we could have got the original WoO show in at Ransomville in July. The track would have been a little more in my favor with a 360 motor against the 410’s.”

The plans for 2018 are looking to be very similar for Susice. Just like in 2017, Ryan will race the family-owned #38 on Friday nights at Ransomville, Saturday in the Slack Racing #3rs at Merrittville and anytime with an open date to race the sprint car for Jerrid Morphy.

At the moment, it looks like Ryan might kick off the 2018 campaign in Florida in February at East Bay Raceway with the Young Drivers #18 sprint car.

Ryan would also like to thank all his fans for their support as well as his family and crew. “I cannot thank my parents, wife Rebecca, Crew Chief Ricky plus Scott, Chris, John and Mike for all their help and time in the garage every night”.  Ryan’s efforts are backed by Asset Consulting Experts, Subway, Niagara One, Patriot Field Service, Tim Phillips Garage, Young Drivers, DMS Powdercoating and Shawnee Service just to name a few.

About Ransomville Speedway:  Ransomville Speedway is located on Braley Road in the hamlet of Ransomville, just 20 minutes from Niagara Falls and Lockport. “The Big R” is a 3/8th-mile DIRTcar sanctioned facility that is the Home of the Summer Nationals. Ransomville also features a 1/16th -mile Go-Kart track for action on the “Little R” on Thursday nights! For more information, please visit us on the World Wide Web at www.ransomvillespeedway.com  as well as follow us on Twitter @Ransomville and like us on Facebook. You can also contact the speedway by phone by calling (716) 791-3602 or (716) 791-3611.