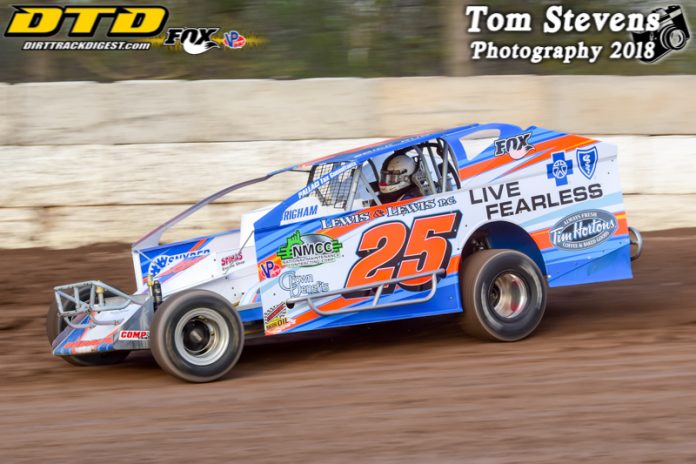 Jesse Cotriss and Erick Rudolph were on the front row for the Krown Undercoating 358 Modifieds feature event with Rudolph showing the way. Cotriss would run in second and three-time and defending track champion Ryan Susice ran in third place early on. Rudolph would pull away from the battle for second between Cotriss and Susice as “The Ransomville Renegade” was looking high and low to pass the sophomore driver Cotriss. Allan Wills spun in turn two, and Greg Martin slowed on the front stretch to bring out the caution on lap 13. The restart would see Rudolph taking off in the lead with Susice taking over second from Cotriss, as divisional rookie Matt Farnham and “Mr. Small Block” Pete Bicknell racing in the top five. Bicknell would pass Farnham to move into fourth place on lap 22. “Mr. Small Block” would move into third place on lap 27. Rudolph would get held up in lap traffic in the late going but Rudolph would hold off Susice to score the win. Bicknell, Cotriss, and Farnham would complete the top five.

Austin Susice and Adam Leslie set the pace in the 25-lap main event for the Investors Service Sportsman with Susice showing the way early on. “The Lockport Laser” Andrew Smith challenged Leslie for second in the races early stages, as Leslie was able to hold off Smith’s challenges. Smith would move into second on lap seven. Smith would drop out of the race just two laps later, giving second place back to Leslie. James Henry slowed down the backstretch to bring out the first caution on lap 14. The mid-race restart would see Susice and Leslie pull away from the rest of the field. Susice would come to a stop on the front-stretch while in the lead to bring out the caution on lap 19. The restart would see Adam Leslie and Brett Senek on the front row with Leslie showing the way. Adam Leslie held off Brett Senek to score his first career Ransomville victory. Derek Wagner, Kevin Wills, and Chris Burek completed the top five.

Billy Bleich and Chris Dziomba were on the front row for the 20-lap feature for the KiPo Chevrolet Street Stocks with the lead duo continuing to battle all the way around the track. “Showtime” Jaren Israel had his motor go up in flames on the backstretch to bring out the red flag on lap one. The restart would see Dziomba back in the lead over a pair of Canadian drivers, Billy Bleich and Bryce Richardson. Pete Stefanski would work his way through the field and challenged Richardson for the third position for several circuits. Stefanski would move into third on lap nine as Richardson went into the pits with an issue. Stefanski would take over second place from Bleich with seven laps remaining and Stefanski started to reel in race leader Dziomba. Stefanski would catch Dziomba and would look underneath the leader and would battle for the lead and Dziomba would hold off Stefanski to claim the win.

Heat race winner Anthony Hermanson and Chris Leone brought the field of Gippster’s Collison 4 Bangers to the green flag for their feature with Hermanson showing the way. Hermanson and Leone would pull away from Chad Desso, Ashley Blech, and Nick Tarnowski as that trio battled for third place. Leone would close the gap but Hermanson would hold off Leone to score the win.


Qualifying event Gerald Poole and David Fingerlow brought the field of Stevenson’s Hardware Novice Sportsman to the green flag for their main event with second-year pilot Fingerlow driving away with the lead. Cody Wolfe would pass Poole to move into second at the end of the opening circuit with 2017 feature winner Bubby Pawlak moving into third place. While in the lead, Fingerlow got loose into turn one all on his own and spun to bring out the races first caution. Fingerlow’s lead was over three seconds with Wolfe and Pawlak behind. Cody Wolfe would bring the field back down to the green flag over Pawlak and Poole. Wolfe would pull away from the rest of the field to pick up his first career victory. Pawlak, Poole, Kenny Washburn, and Orval Harris completed the top five.

NEWS AND NOTES: Erick Rudolph and Adam Leslie set the quick times in the Modifieds and Sportsman respectively to earn a 55gl. drum of VP Racing Fuel. 71 cars signed in pitside for Opening Night. Despite wet weather around the region, Ransomville officials pushed the program along and was completed at 9:52 pm.

Ransomville Speedway is back in action on Friday, May 18 as Baily Brothers Inc. presents a full card of racing plus Autograph Night. Pit gates will open at 5 pm with grandstands opening at 6 pm, with the first green flag of the night being at 7:15 pm. 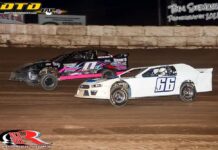