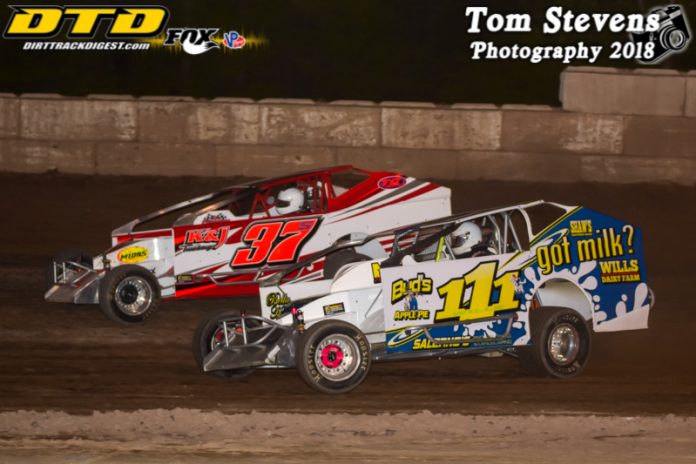 RANSOMVILLE, NY – “The Tornado” Tommy Flannigan from St. Catharines, Ontario was victorious and scored $2,000 for his efforts after winning the 40-lap special for the Krown Undercoating 358 Modifieds this past Friday night at the Ransomville Speedway as Snyder Industries presented the racing program. “Oh Henry” James Henry from Niagara Falls, NY won his first Investors Service Sportsman feature of the season. Pete Stefanski from Wheatfield, NY won his second straight main event in the KiPo Chevrolet Street Stocks. Second-generation driver Matt Hornquist from Eden, NY won his first feature of the season in the Gippsters Collision 4 Bangers. David Fingerlow from North Tonawanda, NY would score his second consecutive victory in the Stevenson’s Hardware Novice Sportsman.

Qualifying heat winners Allan Wills and the “Tornado” Tommy Flannigan led the field of Krown Undercoating Modifieds to the green flag for their 40-lap special with Wills in the lead. Working their way through the field early on were Ryan Susice, Erick Rudolph, and “The Doctor” Danny Johnson. Mike Williams spun in turn four to bring out the races’ first caution. The yellow flag would immediately fly just one lap later as Kenny Wills spun, in turn, one and John Smith making contact. On the restart, Flannigan would take the lead, just as Rudolph and Susice would go three wide with Jeff McGinnis to move into the top five. Susice would pass Greg Martin to move into fourth place on lap 15, just as Rudolph would reel in Allan Wills for second place. Rudolph would take over second on lap 17 and would set his sights on race leader Flannigan. Susice would pass Wills to move into third place with 14 laps remaining. While the leader was in lap traffic, Rudolph would reel in the leader in the closing laps and went three wide with a lap car heading to the checkered flag, but it was Flannigan getting the win.

After a pair of cautions that plagued the start of the main event for the Investors Service Sportsman, “Oh Henry” James Henry would pull away from Robbie Johnston, Dustin Gorhan, Derrick Borkenhagen, and Jonathan Reid in the 25-lap feature go. Borkenhagen would battle with Gorhan for third as point’s leader Brett Senek would reel in Reid for fifth place. Henry would stretch his lead by a full-straightaway over Johnston at the halfway mark. “Oh Henry” would hit lap traffic with 10 laps remaining and he would go on to score the win, his first of the season, making it the third different winner in the division.

Pat Dell and the “Racing Grandpa” Randy Zimmerman led the field of KiPo Chevrolet Street Stocks to the green flag for their feature event with Dell in the lead over “Showtime” Jaren Israel. The lead trio of Dell, Israel, and Cory Sawyer were leading last week’s feature winner Pete Stefanski and Ken Camidge early on. Past divisional champion Brandon Sherwood came to a stop on the front stretch to bring out the caution on lap five. On the restart, Israel would take lead as Dell was challenged by Stefanski for second place. Stefanski would complete the pass on lap seven to move into the runner-up spot and would begin to go after Israel. Stefanski would look underneath and the two veterans would battle for the lead. Stefanski would take the lead on lap ten, just as Ken Camidge would challenge Pat Dell for third place. Dell would regain the runner-up spot after going three-wide with Israel and Camidge. Camidge would take second away from Dell with four laps remaining. Mike Kramarz spun in turn four to bring out the caution on lap 17. Pat Dell would challenge Camidge for second off the restart, but it would be Pete Stefanski winning his second straight feature.

Matt Hornquist took the lead early in the 15-lap feature event for the Gippsters Collision 4 Bangers. Nick Tarnowski and Chris Leone would battle for second as Hornquist pulled away from the field.  Hornquist would hold off a hard-charging Leone to score his first win of the season.


Orval Harris and qualifying heat winner Ken Washburn brought the field of Stevenson’s Hardware Novice Sportsman to the green flag for their 15-lap feature event with Washburn taking the lead off the outside pole position. David Fingerlow would take the lead on lap two as Gerald Poole would move into third place. Pole sitter Orval Harris hit the turn one wall hard on lap six to bring out the races first caution. Off the restart, Fingerlow would continue to show the way over Washburn, Poole, and Bubby Pawlak. Cody Wolfe, opening night feature winner would work his way into the top three after passing Pawlak and Poole before the halfway mark. Wolfe would move into second place on lap 11 after an intense battle with Washburn, Poole, and Pawlak. Fingerlow would pull away from the rest of the field to score his second consecutive victory.

NEWS AND NOTES: 79 cars signed in pitside to kick off Memorial Day Weekend. Coming up in three weeks is the anticipated return of the World of Outlaws Craftsman Late Models. Presale tickets are still available by contacting 1-844-DIRT-TIX. Suite rentals are also available for events throughout the season. Whether it is a company outing, graduation party, family reunion, bachelor or bachelorette party, a night in the Busch Beer VIP Tower is perfect. Contact the speedway office at (716), 791-3602 and get your suite today!

“The Winged Warriors” of the Patriot Sprint Tour will be making their only appearance at the Ransomville Speedway next Friday, June 1. Joining the PST will be the Investors Service Sportsman, KiPo Chevrolet Street Stocks, Gippster’s Collision 4 Bangers, and the Stevenson’s Hardware Novice Sportsman. Pit gates will open at 5 pm with grandstands opening at 6 pm, with the first green flag of the night being at 7:15 pm.