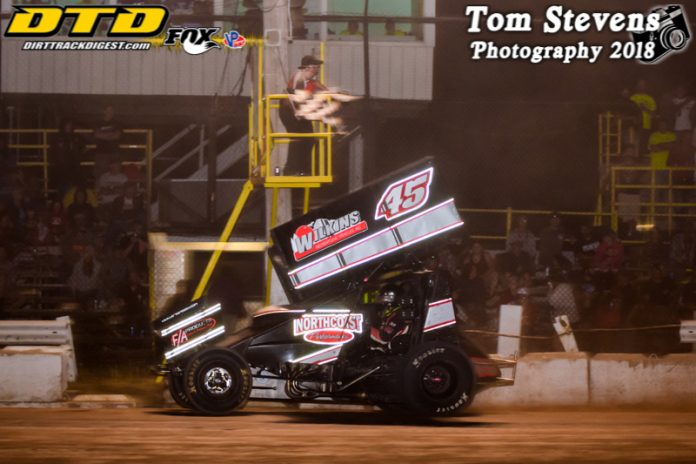 Josh Azzi and Jim Porter led the field of Patriot Sprint Tour to the green flag for their 25-lap A-Main with Azzi in the lead with Lockport resident Dan Bennett taking over second with Porter, Wickham and Kyle Drum racing inside the top five at the end of the first circuit. Dan Bennett would take the lead away on lap two with Kyle Drum taking over second place. Off a lap three restart, Kyle Drum would look to the outside of Bennett for the lead as “The Cobra” Chuck Hebing quickly moved into the third position and then would take second away and then take over the lead on lap five. Hebing quickly pulled away from Bennett, Drum, Azzi and Tommy Wickham. The yellow would come back out on lap 10 as Steve Glover spun in turn two. The lap ten restart would once again see Hebing pull away from the field. Drum would pass Bennett off turn four on lap 11 to take over the runner-up spot and would start to go after the leader. Hebing would lead 20 of the 25 circuits to score his sixth A-Main feature in his career at the Big R.

“The Flyin’ Farmer” Kevin Wills and Garrison Krentz were on the field of Investor’s Service Sportsman feature event with Wills showing the way with Jonathan Reid taking over second and going after Wills for the lead. A major pileup occurred prior to halfway, taking out Cameron Tuttle, Dustin Gorhan, and Dave DiPietro. All three drivers were alert and talking to track officials. Once the field went back under the green flag, Wills and Reid would exchange the lead several times with Wills grabbing the lead and holding off Reid by a ½ car length to grab the win.

Qualifying heat winners Joey Zimmerman and Bryce Richardson brought the field of KiPo Chevrolet Street Stocks to the green flag for their 20-lap feature with Zimmerman pulling away from the field early on. Brandon Sherwood, celebrating his birthday, quickly worked his way into the second position and would take the lead on lap three with two-time feature winner Pete Stefanski working his way up to second place. On a lap six restart, Stefanski would have issues and would hit the turn one wall after contact with Jaren Israel. Stefanski’s night would come to an end after going off behind the tow truck. On the restart, Sherwood would continue to show the way as Ken Camidge worked his way through the field. Camidge would take the lead from Sherwood late in the event and would lead the final few circuits to earn the victory.

Brandon Close and Cole Susice were on the front row for the 15-lap Gippsters Collision 4 Bangers feature with Susice showing the way. Ashley Blech would take the lead away from Susice after a lap three restart and the lead duo would check out on the field. Susice would regain the lead past the halfway mark and would hold off a hard-charging Matt Hornquist to score his first win of the season.

Brian Monahan and Ken Washburn shared the front row for the 15-lap main event for the Stevenson’s Hardware Novice Sportsman with Monahan grabbing the lead. Monahan would lead for much of the distance until a late caution bunched the field back up. The late-race restart would see Cody Wolfe get past Monahan and would hold off Monahan to score his second win of the season.

NEWS AND NOTES:  79 cars signed in pitside for the second consecutive week. The Patriot Sprint Tour made their 18th appearance at the Big R, with the first coming in 2003. Coming up in two weeks is the anticipated return of the World of Outlaws Craftsman Late Models. Presale tickets are still available by contacting 1-844-DIRT-TIX. Suite rentals are also available for events throughout the season. Whether it is a company outing, graduation party, family reunion, bachelor or bachelorette party, a night in the Busch Beer VIP Tower is perfect. Contact the speedway office at (716), 791-3602 and get your suite today!

Ransomville will be back in action on Friday, June 8 as it is the 10th Annual Labor Night at the Races presented by BlueCross BlueShield of WNY in conjunction with the AFL/CIO Niagara-Orleans Central Labor Council to benefit the United Way Serving Niagara County. A full card of Modifieds, Sportsman, Street Stocks, 4 Bangers, and Novice Sportsman will be on the card. 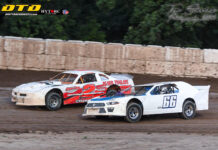