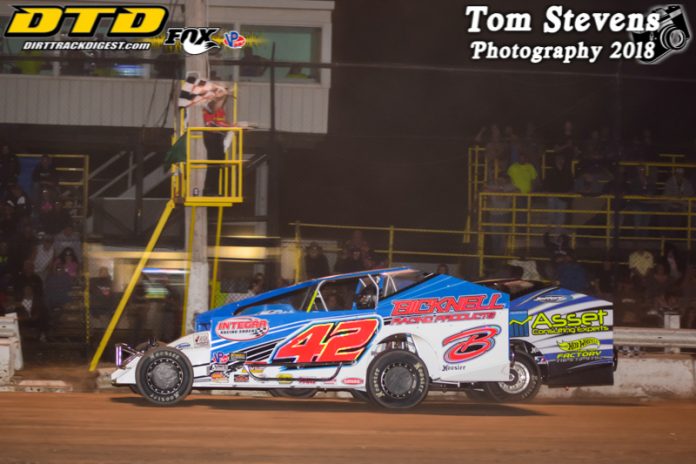 Jeff McGinnis and Jesse Cotriss shared the front row in the Krown Undercoating 358 Modifieds feature event with Allan Wills inheriting the lead after McGinnis and Cotriss hooked crash bars going into turn three. Greg Martin would take the lead away as Rick Richner raced in second. Off a lap five restart, Martin would continue to show the way over Richner and Pete Bicknell, with Ryan Susice and Erick Rudolph racing inside the top five. The top five would pull away from the rest of the field as Richner continued to challenge Martin for the lead. Richner would take the lead from Martin on lap 17 and Bicknell would move into second. “Mr. Small Block” would battle with Richner for the lead with Bicknell taking the lead on lap 20, with Susice and Rudolph getting past Martin to move into third and fourth respectively. The two veterans would hit lap traffic in the late going, just as John Smith and Steve Lewis Jr got together to bring out the caution. Off the restart, Bicknell would lead as “The Ransomville Renegade” Ryan Susice would move into second place, but it was Bicknell earning his second feature of the season by .044 seconds over Susice. Erick Rudolph, Richner, and Greg Martin would complete the top five.

Kyle Wendt and Dustin Gorhan were on the front row for the Investor’s Service Sportsman feature with Gorhan taking over the lead. Battles were happening all over the speedway including a four-wide battle mid-pack with James Henry, Austin Susice, Derek Wagner, and Robbie Johnston. Chris Burek would pass polesitter Kyle Wendt to take over third place on lap seven.  The top three of Gorhan, Krentz, and Burek would catch each other on lap 16. AJ Custodi came to a stop in turn two to bring out the caution on lap 17 after suffering front-end damage. The late-race restart would see Krentz taking over the lead as Burek would take over second place. Krentz would go on to score his first career Investors Service Sportsman victory.

Bryce Richardson and Chris Dziomba led the KiPo Chevrolet Street Stocks to the green flag for their 20-lap feature event with Dziomba jumping into the lead. Cory Sawyer would challenge Richardson for second as race leader Dziomba opened his lead. Pat Dell would spin in turn one to bring out the races first caution on lap seven. On the restart, Dziomba would once again show the way as Richardson was holding off the advances of Sawyer, Mike Kramarz, and Jaren Israel. Sawyer and Richardson would battle for second, just as Israel, Kramarz, and Stefanski would battle for fourth place for several circuits. Dziomba would win his second feature of the season in a runaway.  Richardson, Sawyer, Kramarz, and Israel would complete the top five.

Brandon Potter and Chad Desso were on the front row for the 15-lap Gippsters Collision 4 Bangers feature with Desso taking the lead from the drop of the green flag. Desso would pull away from the field to earn his first victory of the season. Nick Tarnowski would finish in second with Matt Hornquist, Brandon Potter, and Cole Susice completing the top five.

Orval Harris and Brian Monahan brought the Stevenson’s Hardware Novice Sportsman to the green flag for their 15-lap feature event and it was Harris leading the opening circuit. Qualifying heat race winner Bubby Pawlak would take second away from Monahan on lap two. Harris would pull away from the field over Pawlak and David Fingerlow at the races halfway mark.  Harris would lead all 15 circuits to score his first career Novice Sportsman feature win.

“The most powerful Late Models on the Planet”, the World of Outlaws Craftsman Late Models will be making their anticipated return to Ransomville next Friday, June 15 presented by Busch Beer. The Krown Undercoating Modifieds and Investors Service Sportsman will round out the racing card. Pit gates will open at 2 pm, grandstands at 4 pm, and hot laps beginning at 6:45 pm. Admission is $30 presale and $35 at the gates. Presale tickets are still available by calling 1-844-DIRT-TIX or by going online to www.woolms.com/tickets and click on Ransomville Speedway.