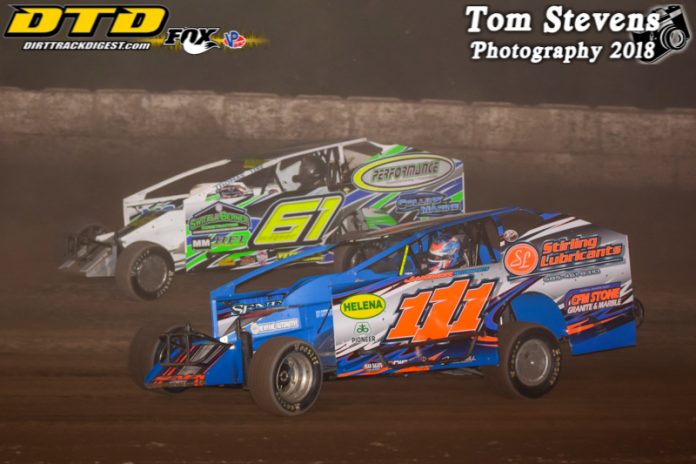 RANSOMVILLE, NY – Derek Wagner from Middleport, NY won his first Investors Service Sportsman feature of the season, making it the seventh different winner in the division so far in 2018. The rest of the program was washed out due to Mother Nature.

Kyle Wendt and Cameron Tuttle were on the front row for the Investor’s Service Sportsman feature with Wendt showing the way with AJ Custodi moving into second place. Custodi would take the lead on lap two with Derek Wagner moving into second with Dave DiPietro racing in third. Wagner would close in on Custodi on lap 10 and would challenge for the lead before the halfway mark. With Custodi and Wagner battling for the lead, this would allow Dave DiPietro, Austin Susice, and Chris Burek to all close in on the battle for the lead. Custodi and Wagner would trade cross-over moves a couple of times before Wagner getting the lead away on lap 20, just before Andrew Smith brought out the races’ lone caution. The final five-lap sprint would see Wagner hold off DiPietro and Chris Burek to score the win, his first of the season. DiPietro, Burek, Susice, and James Henry would complete the top five.

Track management will announce a schedule to when double features will be held for the Street Stocks, 4 Bangers, and Novice Sportsman over the next few weeks. The Modifieds will run double features next Friday, June 29.

NEWS AND NOTES:  76 cars signed in pitside. The Kids Bicycle Race will be rescheduled for a date later in the season.

Farmers Insurance and Moley Magnetics will present the racing action next Friday night featuring a full card of racing and Independence Holiday FIREWORKS! The Krown Undercoating Modifieds will be running double features. Pit gates open at 5 pm, grandstand gates at 6 pm, with racing at 7:15 pm.