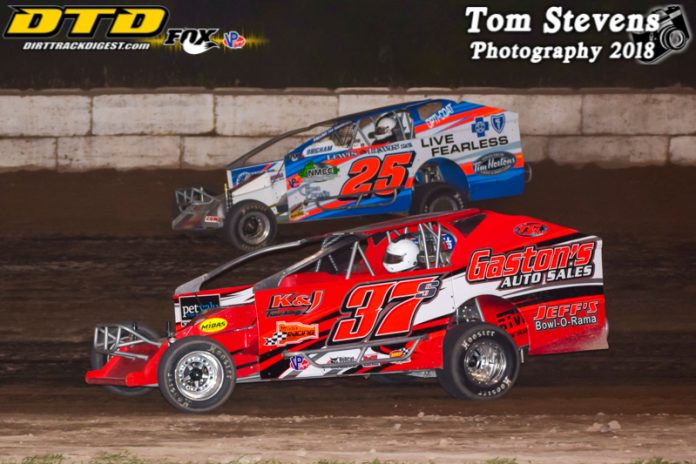 The make-up feature for the Krown Undercoating 358 Modifieds from last Friday night saw Jesse Cotriss and James Sweeting on the front row with Cotriss jumping into the early race lead as Kenny Wills battled Sweeting for second place. Gary Lindberg looped in turn four to bring out the races first caution with just two laps being scored. The restart would see Cotriss in the lead as Scott Kerwin passed Wills to take over second place. Kerwin would start to reel in Cotriss on lap ten. The leaders would hit lap traffic at the halfway mark, as Erick Rudolph raced with Kenny Wills for third place. Rudolph would move into third on lap 17, as Cotriss and Kerwin pulled away. Rudolph would catch Kerwin on lap 22, just as Ryan Susice came to a stop in the moat on the front stretch.  After a multi-car incident on the restart, Matt Farnham moved into second place and would go after Cotriss. Cotriss would cross the start-finish line first but came up light at the scales, giving the win to Matt Farnham for his first career Modified victory.

Mike Williams and John Smith were on the front row in the regularly scheduled 30-lap feature for the Krown Undercoating Modifieds and it was Williams in the lead. A multicar pileup occurred, in turn, two involving Ryan Susice, Scott Wood, Matt Farnham, Scott Kerwin, and Allan Wills. The restart would see “The Professor” John Smith showing the way over Williams, Tommy Flannigan, Steve Lewis Jr, and Greg Martin racing in the top five. Erick Rudolph moved past Martin to move into fifth place. Jeff McGinnis and Chad Brachmann came together in turn four to bring out the caution on lap five. The restart would see Tommy Flannigan take the lead away from Smith with “Hot Wheels” Greg Martin battling with Smith for second with Rudolph and Pete Bicknell in the top five. Rudolph and Bicknell would make quick work of John Smith and Greg Martin to move into second and third respectively by lap nine. Rudolph caught Flannigan on lap 17 as the leaders started to hit lap traffic. Rudolph was glued to the rear nerf bar of Flannigan and looked to the outside of Flannigan and Rudolph would take the lead with five laps remaining. Rudolph would drive away from Flannigan to earn his second win of the season at the Big R.

Justin McKay and Kyle Wendt shared the front row in the 25-lap feature for the Investors Service Sportsman with McKay showing the way early on.  Kevin Wills would pass Wendt to take over second on lap two. Wills and McKay would battle for the lead as Garrison Krentz and Brett Senek raced and battled for third place. Jim Harbison spun in turn three all on his own to bring out the caution on lap six. The restart would see Wills and McKay continued to battle for the lead as Senek moved into third place with James Henry racing in the top five for the first time. Wills would take the lead on lap nine, as Senek passed McKay just one lap later to move into second place. Wills and Senek pulled away as James Henry cleared McKay for third place at the halfway mark after starting 11th on the grid. Senek looked underneath Wills and battled for the lead with Senek clearing Wills for the lead with 10 laps remaining. AJ Custodi came to a stop in the middle of turns one and two to bring out the caution on lap 17. The restart would see Senek in the lead with Wills regaining the lead at the start-finish line. Wills opened up the lead in the late going and Wills would go on to score the win, his second of the season.

Qualifying heat race winners Joey Zimmerman and Bryce Richardson brought the KiPo Chevrolet Street Stocks to the green flag for their 20-lap feature event with Richardson leading the opening circuit. Mike Kramarz and Cory Sawyer battled with Richardson up front on lap three as they went three-wide for the lead as Pat Dell, Pete Stefanski, and Jaren Israel were all battling for position behind the lead trio. Sawyer would clear Richardson for the lead on lap four and Pete Stefanski would move into second place. Sawyer and Stefanski would battle for the lead as “Showtime” Jaren Israel raced in third place. Pat Dell took third away from Israel on lap 14. Sawyer would hold off Stefanski, Israel, Dell and Ken Camidge to score the win, his first of the season.

In the make-up feature from last Friday night for the Gippster’s Collision 4 Bangers, Steve Matson and “Mr. Peanut” Ryan Plante brought the field to the green flag with Plante jumping into the lead. Chad Desso battled with Matson for second with Chuck Cala moving into third place on lap three. Desso would get around Matson to move into the runner-up position and would begin to reel in the leader Plante. The caution would come out on lap seven as Chris Harling Jr came to a stop entering turn three. Plante would regain the lead on the restart as Matt Hornquist quickly moved into the second position. Plante would hold off Hornquist to score the win, his second of the season.

The regularly scheduled 15-lap feature for the Gippsters Collision 4 Bangers saw divisional points leader Matt Hornquist take the lead away on the drop of the green flag with Chad Desso racing in second place. Desso would challenge Hornquist throughout the feature event. Hornquist would go on to score his second win of the season.

Ken Washburn and Brian Harris were on the front row for the 15-lap feature event for the Stevenson’s Hardware Novice Sportsman with Washburn in the lead. David Fingerlow would take the lead on lap two with Cody Wolfe moving into second place. After a lap six restart, Fingerlow would pull away from Washburn and would go on to score the win, his third of the season.

NEWS AND NOTES:  80 cars signed in pitside to make it the highest car count of the season so far. Fireworks lit up the sky for the holiday celebration.

Live Edge Brewery and Asset Consulting Experts will present the full card of racing on Friday, July 6 which will feature Kids Rides! Pit gates open at 5 pm, with grandstands opening at 6 pm, and the first green flag of the night set to wave at 7:15 pm. Coming up in two weeks (July 13) is the second John Susice Memorial for the Street Stocks and it’s Halloween Night! Trick-or-Treating and more activities will take place.