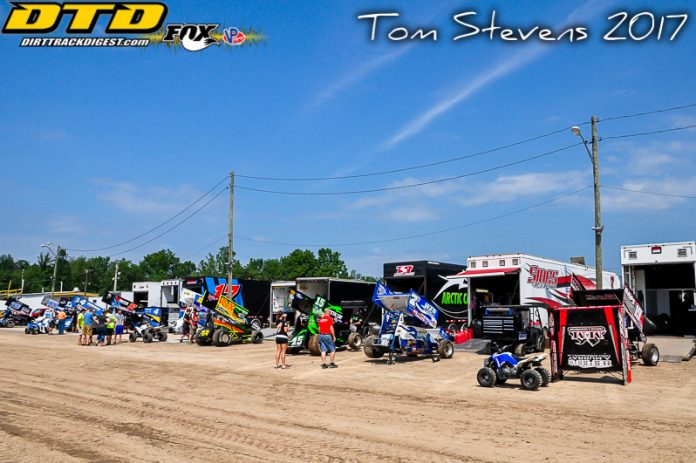 CONCORD, NC – The World of Outlaws Craftsman Sprint Car Series continues its 40th Anniversary Season and Month of Money with an exciting slate of three races in five days through New York. The Series will make its inaugural visit to Airborne Park Speedway on Wednesday, July 25 before heading to Ransomville Speedway on Friday, July 27 and concluding the weekend at the Empire State Challenge at Weedsport Speedway on Sunday, July 29.

Plattsburgh, NY’s Airborne Park Speedway, which is less than 30 miles from the Canadian border, will host The Greatest Show on Dirt for the first time ever on Wednesday, July 25.

“The Outlaws are the biggest product dirt racing has to offer, and we are looking forward to exciting our existing fans and expanding the fan base of Airborne Park Speedway, especially the Canadian market,” Airborne Media Director Robby Knowles said.

For fans attending Airborne Park Speedway, camping for the mid-week show will be available at the track for $22. Tickets still remain for the Outlaws first-ever visit to APS!

“In the track’s 64-year history, I can’t think of an event that trumps this in magnitude. We are looking forward to the biggest event in Airborne Park Speedway history,” Knowles added in anticipation of this summer’s visit by the World of Outlaws Craftsman Sprint Car Series.


Friday, July 27 the Outlaws will return to Ransomville Speedway with the running of The Big ‘R’ Outlaw Shootout. It will be the fifth-ever visit by the World of Outlaws Craftsman Sprint Car Series at the 3/8-mile oval, dating back to 1994 when Dave Blaney won the inaugural event. The Series returned to Ransomville last year for the first time in two decades with ‘The Steel City Outlaw’ Tim Shaffer landing in Victory Lane. Ransomville has made some improvements in 2018 and everyone involved with the speedway is looking forward to the Outlaws returning.

“We’ve added some additional lighting this year to further enhance the facility. The phone calls have been ramping up, asking about camping and tickets. Everyone loves the World of Outlaws, and we are extremely excited to have The Greatest Show on Dirt back. We’ve had great weather all year and we cannot wait for July 27,” Ransomville General Manager Jennifer Martin said. Ransomville Speedway is offering free camping all weekend for the event, so make it a weekend and camp out at the speedway!

The 2017 Empire State Challenge got rained out, but the 2016 event at Weedsport Speedway was a memorable one. Logan Schuchart, who led the first 30 laps of the event, was at the time looking for his first career Outlaw victory when Donny Schatz stole the win away. Schatz was also victorious at the event in 2015.

“Weedsport is an excellent facility, and the track is always slick, smooth and wide. It’s an added bonus that it’s not too far from Pennsylvania and the Shark team will hopefully have some extra fans in the crowd,” Schuchart, who now has six career Outlaw wins, said about racing at Weedsport Speedway.

Tickets for all three World of Outlaws Craftsman Sprint Car Series events in New York are available here: Airborne, Ransomville, Weedsport. If you can’t make it to the track, be sure to watch all the action from the 40th Anniversary Season of the Greatest Show on Dirt live on DIRTVision.com.