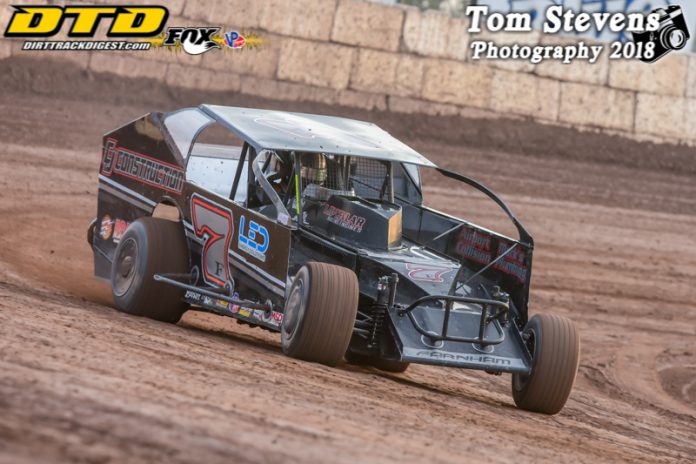 “The Professor” John Smith and “Hot Wheels” Greg Martin brought the Krown Undercoating Modifieds to the green flag for their 30-lap feature with Martin showing the way. Matt Farnham entered the top trio after passing Rick Richner and then would go after John Smith. Farnham would take over second place on lap four and would set his sights on race leader Martin. Pete Bicknell would reel in Smith for third place as Chad Brachmann entered the top five after passing Richner on lap seven. As Martin and Farnham battled for the lead, the divisional rookies were being chased by two multi-time track champions Bicknell and Brachmann. Farnham would take the lead on lap 21. Pete Bicknell would pass Martin to take over second on lap 24. Farnham would hold off “Mr. Small Block” to claim his second win of the season.

Justin McKay and qualifying heat race winner Austin Susice shared the front row for the 25-lap feature for the Investors Service Sportsman with Susice showing the way with McKay, Cam Tuttle, Robbie Johnston, and Brett Senek racing in the top five. Chris Burek slowed in turn four with Kevin Wills and James Henry colliding to bring out the caution on lap six. Entering the night’s action, Chris Burek sat second in track points, just four markers behind points leader Brett Senek. All three were able to rejoin the field on the restart. Brett Senek would take second away from Justin McKay on the restart and would quickly go after race leader Austin Susice. Senek was in the tire tracks of leader Susice with 10 laps remaining, as McKay, Dave DiPietro, and Cam Tuttle raced in the top five. Susice would hold off Senek to score his first win of the season.

Pat Dell and Brandon Sherwood were on the front row in the 20-lap feature for the KiPo Chevrolet Street Stocks with Sherwood jumping into the early race lead. Pete Stefanski would move into second place and would challenge Sherwood for the lead. Stefanski and Sherwood would continue to battle for the lead throughout the feature distance as Cory Sawyer was moving up from his rear of the field starting spot. A lap 10 caution would bunch the field back up as Sawyer would battle with Stefanski and Sherwood for the lead. The lead trio would battle as Jordan Moden and James Thompson raced in the top five. Stefanski would take the lead with two laps remaining and would go on to score the win.


Kenny Washburn and Orval Harris were on the front row for the Stevenson’s Hardware Novice Sportsman feature with Washburn in the lead as David Fingerlow, Cody Wolfe, and Bubby Pawlak all move to race inside the top five. Orval Harris and Cody Wolfe came together in turn one and Mike Martin had nowhere to go to bring out the caution on lap two. On the restart, Washburn would continue to lead over Fingerlow and Pawlak. Washburn would pull away to earn the win, his second of the season.

NEWS AND NOTES: Scott Kerwin and Dave Conant were the lucky recipients of a brand-new Hoosier Tire. Special thanks to Hoosier Racing Tires for their continued support of racing at Ransomville Speedway! Lap sponsorships are available for the King of the Hill Street Stock 100, BEI Lightning Series 40, and the Gippsters Collision 4 Banger event on September 14. Laps are $20 to purchase and you can contact the Speedway Office, see Ashley from 50/50, Jeff Anstett, Jenn Martin, or Steve Petty to purchase.  The Sid Jeffery Memorial for the Modifieds has been rescheduled to Friday, September 7.  The Ransomville Speedway Awards Banquet will take place on Saturday, November 10th at the Lewiston #2 Fire Company. Jonsie will be the musical entertainment and the banquet will be catered by Donna Eick. More information about the banquet will be announced in the coming weeks.

Racing returns on Friday, August 31 as WGR 550 and Salerno Snowplowing presents Season Championship night for the 358 Modifieds and Sportsman. Also, on the card will be the Labor Day Smashtacular Demolition Derby!  It is also Team Spirit Night, so fans are encouraged to wear and support their favorite drivers plus a full card of racing! Pit gates will open at 5 pm with grandstand gates will open at 6 pm and the first green flag of the night will fly at 7:15 pm. 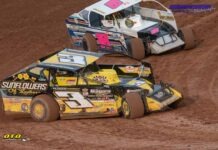