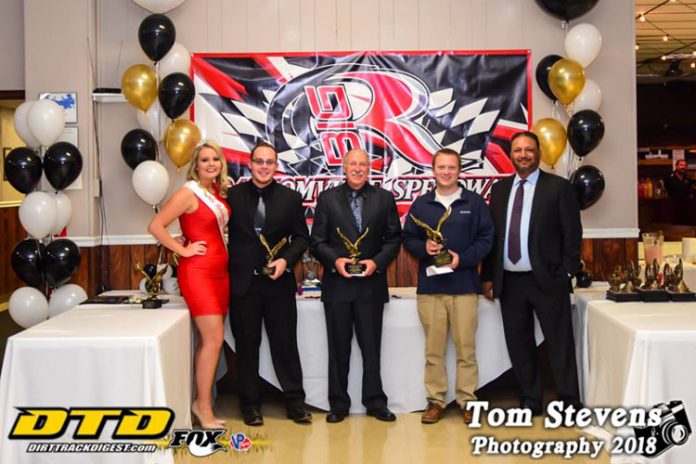 RANSOMVILLE, NY – Ransomville Speedway hosted their annual Awards Banquet on Saturday night at the Lewiston #2 Fire Hall. The 2018 season saw its last checkered flag in September, and plans are already starting to take shape for the 2019 season at the Big R. Over 200 people were in attendance as track announcer Rick Mooney mc’ed the festivities.

The Key Player Award recipient was Ron Martin. Ron was the go-to guy for anything needed for the speedway. From mowing the grass to working on the track prep crew, to taking motors on behalf of the speedway to the dyno in Fulton, to ordering and getting parts, and more. “Ron is the kind of the person that will do whatever you ask him to do”, commented General Manager Jenn Martin.

For the first time in speedway history, all three major dirt racing touring series made stops at Ransomville in the same season. Mike Marlar won the anticipated return of the World of Outlaws Craftsman Late Model event. David Gravel won the Big R Outlaw Shootout when the “Greatest Show on Dirt”, the World of Outlaw Craftsman Sprint Cars came to town. Stewart Friesen became a six-time winner of the Summer Nationals when the Super DIRTcar Series made their annual trip in August. “The Cobra” Chuck Hebing continued his dominance at Ransomville, earning the victory in the annual visit by the Patriot Sprint Tour.

The point fund money raised from the weekly 50/50 draw was $24,883. Huge thanks to Ashley Sharp, Shay Moeller, and Tylor Heckman who were the main sellers this season. Point fund money was paid out to the top 15 in Modifieds, top 15 in Sportsman, top 10 for Street Stocks, top 10 for Mini Stocks (4 Bangers), and top 5 in Novice Sportsman. Significant others of the 2018 track champions all received jewelry from Firth’s Jewelers.

The crowd in attendance enjoyed a catered dinner by Donna Eick and enjoyed the musical stylings of Jonesie and the Cruisers well into the evening.

Plans are starting to take place for the 2019 season, including the change of names from the 4 Bangers to the Gippster’s Collision Mini Stocks. Ransomville Speedway will be represented at the Northeast Racing Products Auction and Trade Show November 16-17 in Syracuse, NY. Season tickets are now on sale for 2019. Call (716) 791-3602 or email raceransomville@gmail.com for more information.