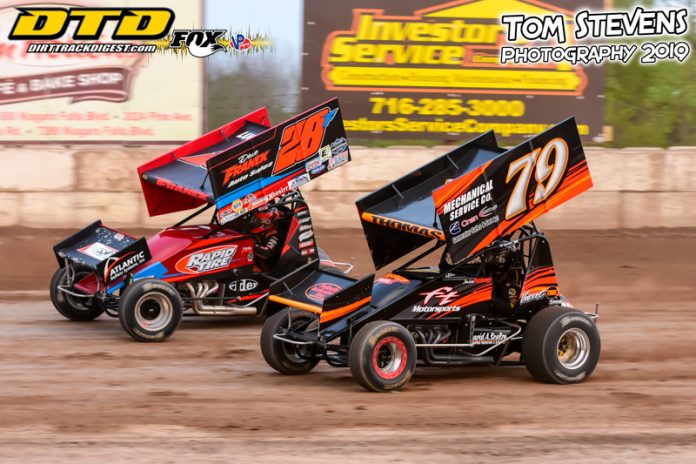 RANSOMVILLE, NY – Another new racetrack, another win for Wantage, New Jersey’s Davie Franek as he took advantage of a lap 14 restart to get by Jordan Thomas to take home his second Patriot Sprint Tour A-Main of the season. Jordan Thomas would have to settle for second followed by Jared Zimbardi, Joe Trenca and Pete Richardson the top five

“This certainly makes the five and a half hour ride a little bit easier” Franek expressed in victory lane “We got here, unloaded and were pretty decent, we just tweaked on the car all night, we knew what we had to do.”

Jordan Thomas, who is notorious for his poor drawing was able to pull out No. One pill for the 25 lap A-Main and would start alongside Pete Richardson. Thomas would pull away from the rest of the field early while Richardson, Franek and Joe Trenca would contest for the two spot.

Franek, who started sixth, would need several laps before getting by Joe Trenca and then Pete Richardson for the runner up spot. Once he was able to solidify himself as the second place driver, he would start to reel in the 79 of Jordan Thomas.

Thomas would still have a convincing advantage over the field even with lap traffic getting involved. However on lap 14, eighth place running Kyle Phillips made contact with Roger Lavesque causing Phillips to be put over on his side bringing out the red flag. Both drivers were okay, but both their nights were complete.


On the restart, Thomas drove into the corner low while Franek took a lot of momentum into going high and the two would go wing to wing down the back stretch with Thomas still maintaining the lead at the line.

It was finally on lap 17 when Franek could clear Thomas riding the top of turn two to take command. Meanwhile the battle for third would also take shape between Zimbardi, Trenca and Richardson.

Franek would pull away for the final eight laps to take the win as Jordan Thomas and Jared Zimbardi would complete the podium. The restart was all Franek needed to get by Thomas to grab his second win on the tour in 2019.

“I could tell he was a little snug getting into the corners and he was cheating the curve” Franek explained. “I just knew if I could keep my momentum up, eventually the momentum would win but he raced me clean, he definitely could have dirtied me on the back stretch but we ran side by side for a couple laps and I have a lot of respect for that.”

For Jordan Thomas, who is now entering his third year on the tour has been achieving much better results at the tracks he typically has struggled in the first couple of seasons with the Patriots.

“We struggled a lot when we started coming up to New York” Thomas said. “We got it figured out now, it’s a long season and we are running pretty good right now so nothing to hang our heads on.”

For Jared Zimbardi, luck finally might be starting to get back on his side, with several poor finishes to start out the year. The five time series champ would complete the podium at Ransomville but it was not easy as he had quite the battle with Joe Trenca and Pete Richardson.

“I was thinking we were going to be stuck with a fifth-place car, but we got that red which helped us” Zimbardi noted. “I knew Richardson was going to go to the top and I had to do kind of a slide job on him, he just kind creped out there enough I could just get underneath him, then Trenca was running the bottom and I just went back to the top.”

Jonathan Preston and Josh Azzi would take the heat race wins while 15 year old driver Kyle Phillips, in only his second time in a sprint car would score the Bonnell’s Rod Shop Dash for Cash. Brad Knab was awarded the Prestige Pool & Spa Final Finisher.

The series will take a weekend off in lieu of the All Star Circuit of Champions visiting New York State this week as some competitors will be competing against them in 410 competition. The series then treks to Central Pennsylvania on June 15 for its only time in 2019 to race with the regulars at Selinsgrove Speedway for the Joe Whitcomb Memorial.