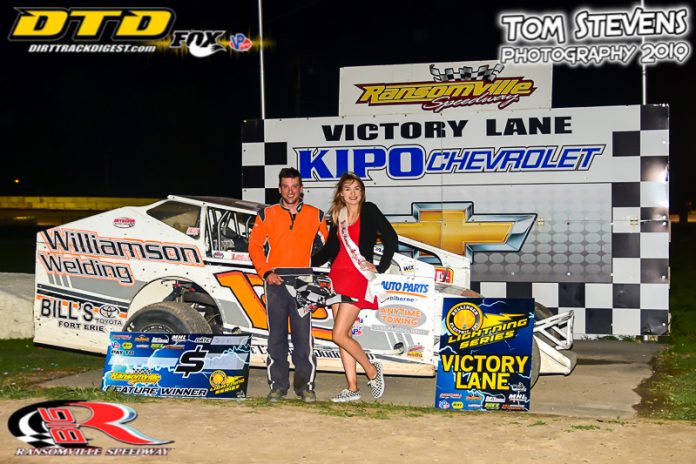 RANSOMVILLE, NY – Two-time and defending Series Champion Chad Chevalier from Port Colborne, Ontario won the second annual Sean Letts Memorial for the Bellinger Electric Inc. (BEI) Lightning Series for the Investors Service Sportsman as Investors Service, Tonawanda Island Launch Club, Buffalo Construction Consultants, and Firth Jewelers present night one of King of the Hill Weekend at Ransomville Speedway Friday night. Series points leader Won the inaugural visit from RUSH Wingless Crate Sprint Cars. Wheatfield, NY’s Pete Stefanski won the main event for the KiPo Chevrolet Street Stocks and Cole Susice from Ransomville, NY took home the checkered flag in the Gippsters Collision Mini Stocks.
Derek Wagner and Chad Chevalier Brought the field to the green flag for the Sean Letts Memorial 40 for the BEI Lightning Series with Wagner showing the way. Brett Senek and Brad Rouse was on the move early as both entered the top five after passing Trevor Wright and Andrew Smith. While in lap traffic, the leaders would have a tough time to get through as Chevalier was able to start to reel in Wagner. Noah Walker would enter the top five for the first time on lap 16 after passing Andrew Smith. After a couple of mid-race restarts, Chevalier was able to take the lead away from Wagner. Jim Harbison would race inside the top five and would start to go after the race leaders. Chevalier would lead the final 15 laps to score his second series win over Brad Rouse and Derek Wagner.

Series points leader Brian Woodhull and 18 year old Jeremy Weaver were on the front row for the inaugural visit by the RUSH Wingless Crate Sprint Cars with Woodhall showing the way. Arnie Kent would move into third with Zach Morrow and Dave Hawkins racing inside the top five. Woodhall and Weaver battled for the lead for several laps with Woodhall but was unable to capitalize for the lead. Woodhall would lead all 20-laps to score the victory.
Jason Fontaine and Cory Sawyer set the pace in the KiPo Chevrolet Street Stocks feature event with Sawyer showing the way with Pat Dell challenging Fontaine for second. A multi-car wreck on the front straightaway would slow the field down to bring out the caution involving Fontaine, Stefanski, Sawyer, and several others. All were able to continue with the exception of Fontaine, who was towed off the track. Pete Stefanski would work back up through the field to take the lead away from Jaren Israel. Stefanski would pull away from the field to score the win.

Chris Leone and Chuck Cala led the Gippsters Collision Mini Stocks to the green flag for their feature event with Leone showing the way. Matt Hornquist would move into second and would go after race leader Leone. Nick Tarnowski flipped on the front stretch to bring out the red flag. Tarnowski climbed out of his car under his own power and was alert with medical personnel. The restart green would see Leone, Hornquist, and Cole Susice race inside the top three. Hornquist would take the lead away from Leone on lap five. Hornquist and Susice battled for the lead over the feature go and Susice would score the win in a last-lap pass.

The 2019 season will end on Saturday, September 14 as Investors Service presents the annual King of the Hill 75 for the KiPo Chevrolet Street Stocks. The King of the Hill 75 will also be the championship event for the CanAm Challenge between Ransomville and New Humberstone Speedways. The BRP Modified Tour will invade Ransomville for their inaugural visit plus the season championship event for the Gippsters Collision Mini Stocks and a Sportsman/Novice Shootout. Pit gates will open at 4 pm with grandstands opening at 5 with racing getting underway at 6:15 pm.