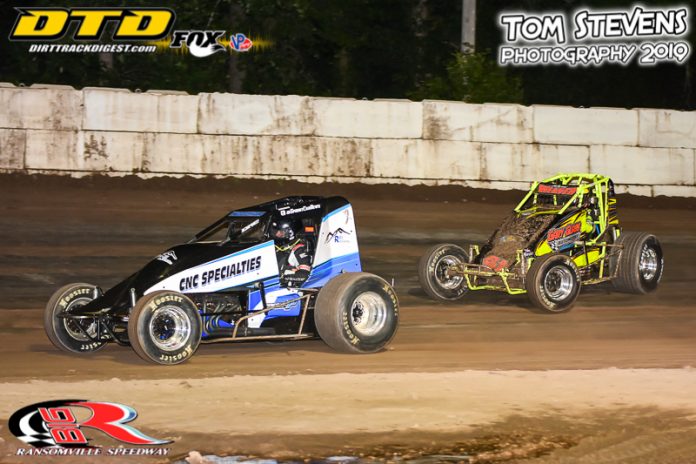 RANSOMVILLE, NY – The Sweeney Chevrolet Buick GMC RUSH Sprint Car Series powered by Pace Performance kicked off the second annual “Empire State Classic” weekend on Friday night with the first ever appearance at Ransomville Speedway. It marked the furthest trip from home for the second year division with more than three to over four hours for all competing teams. The entire RUSH Sprint Car portion of the program went caution-free with the checkered flag falling in the feature before 8:30 p.m. as it was a race against Mother Nature, which was bringing in a strong cold front across Ontario, Canada. The three-night swing through western New York continues with nights two and three at Genesee Speedway in Batavia, NY on Saturday and Sunday as part of their “Topless Nationals”.

Brian Woodhall entered the night as the Bonnell’s Rod Shop Weekly Series points leader finishing in the top five in 11 of his 13 starts in 2019. Woodhall however had only been able to make it to victory lane once coming back on June 22 at Sharon Speedway for his first career RUSH win. On Friday night, Woodhall led all 20 non-stop laps of the feature, but it was far from easy as Jeremy Weaver hounded him for the entire duration. Woodhall earned $800 for the Bonnell’s Rod Shop feature win, and takes the early points lead in the “Empire State Classic” Championship presented by CNC Specialties, Intense Fab & Design, and Pace Performance. The caution-free feature was timed in 6:28.790.

“I heard him quite a few times,” acknowledged the recently-turned 35-year-old Apollo, Pa. driver. “We were rushing trying to beat the rain, and made some shock adjustments trying to tighten it up through the center. I knew if I could protect the bottom they would have a pretty tough time getting around me on the top. We have a pretty good setup with this DRC car that I think we can go anywhere in the country and be relatively competitive. I have to thank my dad along with my wife for putting up with me racing all the time. I also have to thank Vicki (Emig) and the RUSH Series because we wouldn’t be racing if it wasn’t for this. I appreciate all of the fans coming out tonight.”

Woodhall got off to good start at the beginning of the feature over Weaver, while Arnie Kent, Dave Hawkins, and seventh starting Brandon Blackshear followed in positions three through five. Zach Morrow, who started eighth, used the highline to move forward as he cracked the top five on lap two getting by Blackshear. Weaver began to pressure Woodhall and the two were side-by-side for the lead on lap three, but Woodhall held on as the two pulled away from the field on lap four.

Morrow continued to race to the front as he drove around Hawkins off turn two for fourth on lap five. Morrow then went after Kent and the two began their battle for the show position on lap six. Back up front, Weaver was really pressuring Woodhall on lap eight and continued to do so as the laps ticked off without a caution. Weaver would get under Woodhall and pull nearly even on several occasions, but Woodhall was running the preferred line. With those two going at it, Kent began to close in on lap 11, but would never get close enough to challenge.

Woodhall was able to keep Weaver at bay for the victory by 0.672 of a second in his CNC Specialties Manufacturing/RFI Resources/Precise Racing Products-sponsored #8B. Weaver was second for the third time this season as he continues to be close at his first career Sprint win. Kent withstood Morrow’s challenges to take the third spot. Morrow tried to get around Kent on the final lap, but rode the fence in turns one and two somehow managing to keep going without losing a spot.

Hawkins was fifth for his first top five of the season. Brandon Blackshear and Shawn Smith were sixth and seventh. Tyler Powell recorded his season’s best effort in eighth. Brad Blackshear, a one-time winner this season, and Steve Pedley completed the top 10. Heat winners were Weaver and Hawkins. 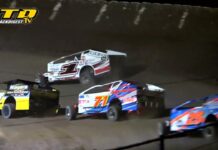 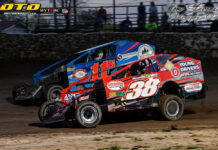