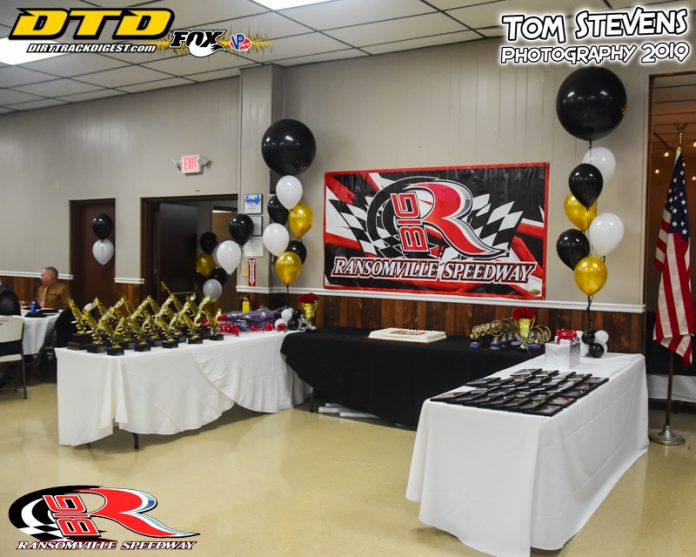 RANSOMVILLE, NY – Ransomville Speedway celebrated the performances of its racers and teams during the 2019 season on Friday night during the annual season awards banquet. Track staff, teams, their families and fans gathered at the Lewiston #2 Firehall for an evening of fun, with catering provided by Donna Eick and live music from Breakaway.

Headlining the list of award winners were the 2019 Ransomville Speedway track champions. Erick Rudolph of Ransomville was crowned Krown Undercoating 358 Modified track champion for a second year in a row. Rudolph beat Mat Williamson by 17 points after a season-long battle between the two drivers. He won five races and scored 11 top fives while en route to another title. Rudolph was also crowned the 2019 Driver of the Year for his impressive performance throughout the season, and the successful defense of his Modified title.

In the Investor’s Service Sportsman, Brett Senek of Ransomville scored his second-straight division championship. He narrowly beat Derek Wagner by 11 points to successfully defend his championship. Senek piled up four wins during 2019, which was in stark contrast to his 2018 title where he went without a win. He was also named the winner of the Trevor Wilkins Hard Charger Award for his ability to pass competitors consistently.

The Stevenson’s Hardware Novice Sportsman championship was shared by two drivers. Mike Martin of Appleton, N.Y. and Butch Zimmerman of Burt, N.Y. finished the season tied with 668 points, and were declared co-champions. It was the fourth time in speedway history that there was a tie for a track title. Zimmerman racked up two wins early in the season, and then piled consistent finishes the rest of the way. Martin finished first and third in the last two races of the season to catch Zimmerman in the final weeks to share a piece of the title.

The significant other of each track champion received jewelry from Firth’s Jewelers.

Street Stock veteran Pete Stefanski earned the Performance of the Year Award. Stefanski led all Ransomville drivers in 2019 with seven feature wins, including the King of the Hill 75. Rob Johnston was named Car Owner of the Year. His son, Robbie, finished sixth in the Sportsman standings this season with six top five finishes and nine top tens.

Track photographer Tom Stevens received the Key Player Award for his dedication to his position and his craft. Stevens shoots photos for both the Friday night racing program and Go-Karts on Thursdays. He is passionate about his work, and is a valuable asset to the marketing and promotion of the facility.

The 2019 season is now in the records, but track management is already hard at work putting together events for 2020. The Super DIRTcar Big Block Modifieds, Race of Champions 602 Sportsman Modified Series and BEI Lightning Sportsman Series are already confirmed to return next year. Additional announcements regarding the 2020 schedule will be made throughout the coming months, including some exciting sprint car events. Track sponsorships, marketing partnerships and VIP suites sales for next season have also begun. Contact Jenn Martin at the speedway office at (716) 791-3602 to lock in your company’s dates for 2020.