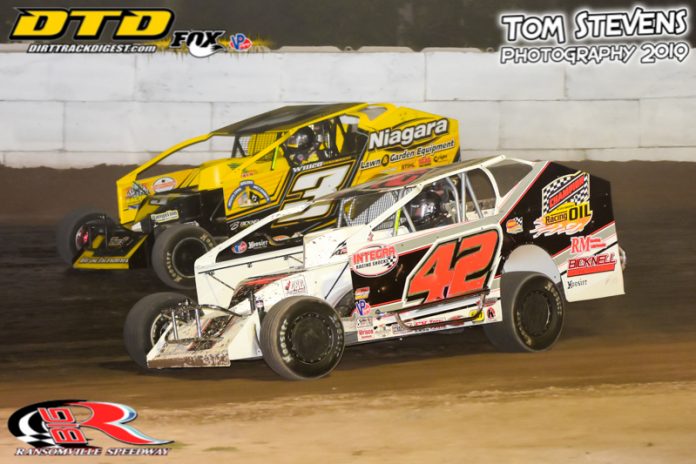 RANSOMVILLE, NY – Ransomville Speedway and the Jeffery family are proud to announce the 4th annual Sid Jeffery Memorial for the Krown Undercoating 358 Modifieds and the Investor’s Service Sportsman will take place on Friday, July 24 presented by Jeffery Machine.

This year’s event is extra special because it will pay tribute to both Sid and his wife Carol, who passed away last year. The Modified feature will pay $2,000-to-win and it will be 55 laps in honor of Sid and Carol’s 55th wedding anniversary, which would have been that day. The Sportsman feature will pay $1,000-to-win.

“This year’s race will be difficult because it will be the first one without mom,” said Mike Jeffery, “She (Carol) was very much the leader behind the Sid Jeffery Memorial. She was the driving force behind my brothers, Shawn and Kyle, and myself. She backed all of our racing careers.”

Sid Jeffery was well known in the Ransomville racing community as he helped out a number of racers, including Jim Borget, Mike Jeffery and Greg Martin. The father-son combination of Sid and Mike Jeffery won throughout the area in the 1980s and 1990s at tracks, such as, Ransomville, Humberstone, Merrittville, Genesee, Tri-County and Perry and won the DIRT Rookie of the Year title in 1988. Scott Jeffery, who serves as crew chief for Larry Wight and Billy Decker on the Super DIRTCar Series, got his start by turning wrenches on the Mike Jeffery racers. Sid Jeffery came back in 2010 to help Greg Martin with his Sportsman career. The duo won the 2014 Ransomville Sportsman track championship as well as the RUSH Touring Series Sportsman Championships in 2014 and 2015.

The inaugural running of the Sid Jeffery Memorial took place in 2017 for the Sportsman division with Matt Farnham picking up the win. The 358 Modifieds took part in the second edition as Ryan Susice came out on top of a talented field. Last season both the Modifieds and Sportsman were included as Erick Rudolph won the Modified portion, and Scott Kerwin came out of “retirement” to win the Sportsman race.

In addition to the significance of the race falling on what would have been Sid and Carol’s 55th wedding anniversary, the fact that this is the fourth edition is meaningful because of Sid’s work with Greg Martin’s #4 team. “My father was pretty instrumental to that team, and brought them a lot of success,” said Jeffery, “Mom was pretty influential helping behind the scenes as well. They were an integral part of Greg’s race team.”

The Crate Late Models will be on hand for the Sid Jeffery Memorial as well. They returned to Ransomville last June for their first appearance since 2016. Jeremy Wondering won the feature after a thrilling battle with Paul Grigsby. A total of 20 cars from across New York and Ontario took part in the event. The Sunflowers of Sanborn Mini Stocks and Stevenson’s Hardware Novice Sportsman will also be in action. The Modifieds will run timed hot laps to set their heat race lineups.