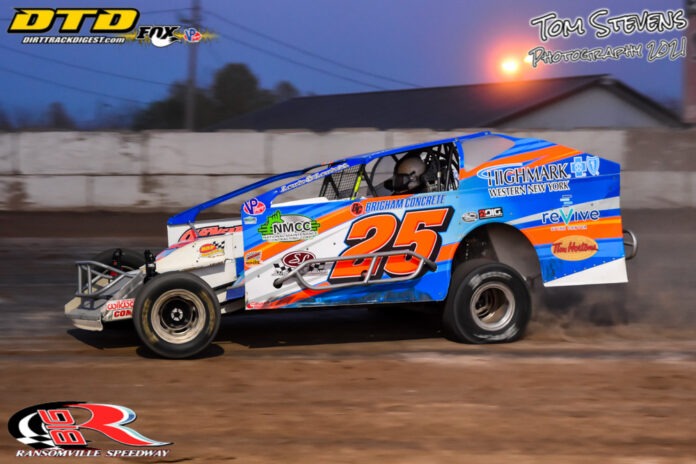 Curtis Rung and Tim Durfy were on the front row were on the front row for the Mackenzie Kulesza Memorial for the Sunflowers of Sanborn Mini Stocks and it was Rung in the lead with Brad Whiteside racing in second. Whiteside would take the lead on lap three with Chris Leone, Ryan Plante, and James Gayton racing in the top five. Brian Melcher hit the turn one wall off the lap three restart to immediately bring out the caution. On the restart, Chris Leone would take over second place with James Gayton moving into third. Leone and Gayton would battle for second as Whiteside started to pull away. Curtis Rung spun and hit the turn three wall to bring out the caution on lap seven. Leone would take the lead away off the restart with Whiteside, Plante, Cole Susice, and Ashley Harbison racing in the top five. Susice would move into third at the halfway mark with Plante going to the pits, ending his top-five run. Leone and Whiteside would battle for the lead with Whiteside regaining the lead on lap 16. The leaders would encounter lap traffic on lap 18. Rick Neamon brought out the caution on lap 18 after laying fluid on the track. Harbison would move into third on the restart, but the caution would come back out as Adam Filer spun in turn three. The late-race restart would see Leone in the lead with Whiteside, Susice, Harbison, and Chris Miller racing in the top five. Leone and Whiteside would duel for the lead and Whiteside would regain the lead with three laps remaining. Susice would charge after Whiteside, but Whiteside would pick up the win.

Erick Rudolph and Mat Williamson set the front row for the Krown Undercoating Modified feature with Rudolph showing the way. Ryan Susice and Chad Brachmann battle for third as Greg Martin passed Kyle Inman to enter the top five. John Smith slowed on the backstretch to bring out the race’s first caution. Williamson was able to take the lead away from Rudolph on the restart. Gil Tegg’s night came to an end on lap four as he went off on the hook after sustaining damage to the left rear of the A Service number 22. The lap four restart would see “Money Mat” take the lead with “The Firestarter” regaining the lead on lap five, just before John Smith brought out the caution. Ryan Susice would take third away from Chad Brachmann with James Sweeting racing in the top five. Brachmann would regain the third position away from Susice on lap 15, just as Rudolph started to work on lap traffic.

Scott Kerwin and Noah Walker brought the Investor’s Service Sportsman to the green flag with Kerwin quickly taking the lead as Brett Senek and Cameron Tuttle battled for third. Jordan Moden hit the turn three wall to bring out the race’s first caution. On the restart, Kerwin would continue to show the way as Brett Senek would take over second, with Walker, Brett Martin, and Tuttle raced in the top five. Kerwin’s huge lead that he had over the field was erased on lap 14 as Austin Susice slowed on the front stretch. The mid-race restart would see Kerwin out front over Senek, Martin, Walker, and Derek Wagner racing in the top five. Brett Martin would close in on Senek as Kerwin continued the lead. Zack Sam would battle with Walker, Wagner, and Tuttle for fifth place as the leaders pulled away from the field. Kerwin would go on to score the win over Senek, Martin, Walker, and Wagner.

Sam Junkin and Dylan Duhow shared the front row for the Kevin’s Carpet Cleaning Novice Sportsman with Duhow taking over the lead at the end of lap one. Duhow would open his lead over Junkin with qualifying heat winner Ken Washburn, Jake Bansmer, and Greenley George racing in the top five. Washburn would spin in turn three on lap 10 to bring out the race’s first caution. Duhow would take off back into the lead with Junkin, George, and Bansmer racing in the top four. Duhow would pull away from the field to pick up the win.

NOTES: 79 cars signed in on Opening Night. The racing program was being streamed for the first time in speedway history on Dirt Track Digest.tv. Over $3,000 in lap sponsorships and over $1,000 in other contingencies went to the field of Mini Stocks. The Chinese Auction that took place prior to the race raised over for Mercy Flight. Erick Rudolph (Modifieds) and Scott Kerwin (Sportsman) received a 55g drum of VP Race Fuels after setting quick time during April 30th’s Test, Tune, and Time.