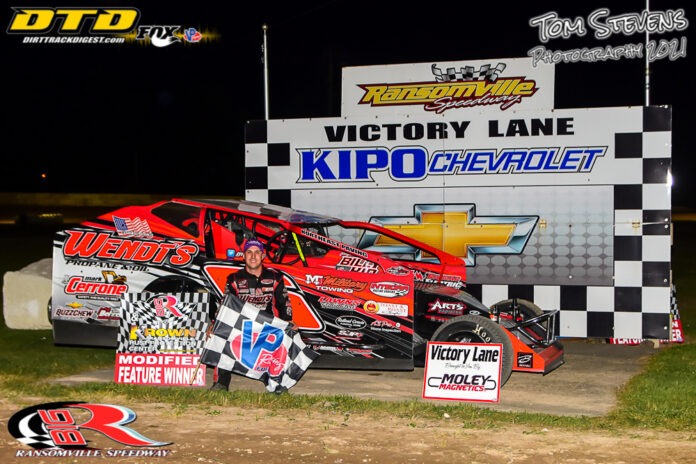 RANSOMVILLE, NY – Mat Williamson of St. Catharines, Ontario continued his recent hot streak on Friday night at Ransomville Speedway as he nabbed his first Krown Undercoating 358 Modified win of the season. It was Williamson’s third-straight top two finish in the past six days after winning the Super DIRTCar Series event at Weedsport Speedway last Sunday and finishing second the following night at Lebanon Valley Speedway.

Williamson started on the front row of the Krown Undercoating 358 Modified main event, and led all 30 laps in a race that went virtually caution-free. The only pause came on the race’s initial start when original pole sitter Jesse Cotriss slowed as the field headed into turn two for the first time. Most of the cars were able to dodge Cotriss’s slowing Modified except for John Smith, who spun to avoid hitting him.

Williamson went on a tear when the race restarted as he pulled away from the pack. While he was in a class of his own on this night, there was still plenty of action inside the top five. Chad Brachman moved quickly from the seventh starting spot to mix it up with the leaders. He passed Gill Tegg, Jr. for third on lap 9, and then wrestled with Ricky Richner for several laps over the runner-up spot.

Former track champions Ryan Susice and Erick Rudolph spent the entire race battling each other while racing their way through the top five. The duo got past Tegg just past the halfway point to move into fourth and fifth place. They battled with Richner for third in the closing laps with Rudolph managing to claim the spot by race’s end for his third-straight top three finish to start the season at Ransomville. Susice hopped the cushion which allowed Richner to hold on to fourth while he settled for fifth.

Williamson pulled out to a lead of more than six seconds as he cruised to his first Ransomville win of the season. He credited his Wendt’s Propane team for the win and the extra work they put in at Fulton Speedway last Friday after Ransomville rained out to help dial in the car.

The Investor’s Service Sportsman feature could easily be considered an early-season favorite for race of the year at Ransomville. Pole sitter Noah Walker and Brett Senek took off at the start of the race and battled closely for the lead throughout the opening 20 laps of the event. There was plenty of intense racing behind them as well featuring the likes of Scott Kerwin, Andrew Smith, Jim Harbison, Derek Borkenhagen, Austin Susice and Zack George.

The action boiled over on lap 13 when Harbison spun in turn 4 after being passed by Kerwin for position. Derek Wagner made impact with the stopped car of Harbison, but luckily both drivers were uninjured.

The race resumed with Walker and Senek going at it for the lead with slide jobs being traded back-and-forth. Senek finally took control for good on lap 21 when Walker pushed up coming out of turn 2. Kerwin got by Walker for second place just one lap later, and then locked on to Senek for the final eight circuits.

Senek headed into the final two turns of the race with Kerwin behind him when the duo collided in turn 3. Senek was able to shake off the contact and drove to his first win of 2021 at Ransomville. Kerwin followed closely in second with Walker, Susice and George rounding out the top five.

The KIPO Chevrolet Street Stocks put on a show of their own with rivals Pete Stefanski and “Showtime” Jaren Israel going head-to-head once again. Stefanski started on the pole while Israel started sixth, but the pair quickly mixed it up for the lead with veteran Mark Loveland. The trio raced three-wide for the top spot on lap 5 with Loveland taking control.
Loveland and Israel then battled while Stefanski dropped back to third. Israel got by Loveland on lap 7 after the pair made contact on the backstretch and into turn 3. It was then Stefanski’s turn to chase Israel for a number of laps before regaining the lead with just three laps to go.

Israel had one last chance to steal the victory away on the final lap, but he came up one position short. Stefanski held on for his second win of the season followed by Israel, Loveland, Roger Israel and Mike Kramarz.

Cole Susice captured his first win of 2021 in the Sunflowers of Sanborn Mini Stocks. Ashley Harbison led the first six laps of the race from the pole position in her Moley Magnetics #6. Unfortunately, her car came to a stop on the backstretch on lap 7 to bring out the caution. This briefly gave the lead to Ryan Plante, but Plante’s car came to a stop shortly after the ensuing restart.
Susice inherited the lead after Plante’s misfortune and he went on to dominate the second half of the 15-lap feature. The 2019 track champion crossed the finish line first followed by Nick Tarnowski and Chris Miller. Harbison was able to get her car repaired without losing a lap and rebounded for a fourth place finish. Dave Dussault rounded out the top five.

Just two weeks after suffering a scary crash on the back straightaway while leading, Dylan Duhow returned to victory lane in the Kevin’s Carpet Cleaning Novice Sportsman. Duhow survived the flip and came back with a vengeance as he passed Jake Bansmer for the lead on lap 5 and never looked back. It was his second win of the season Bansmer posted a career best finish at Ransomville with his second place result and was followed by Sam Junkin, Kenny Washburn and Brandon Close.

The action continues at Ransomville this Friday, June 11 with a great night for kids, including the annual poster content, race car rides and a bike giveaway presented by Behm Automotive. There is also a full card of racing with all five weekly divisions of racing. The action starts at 7:15 p.m.