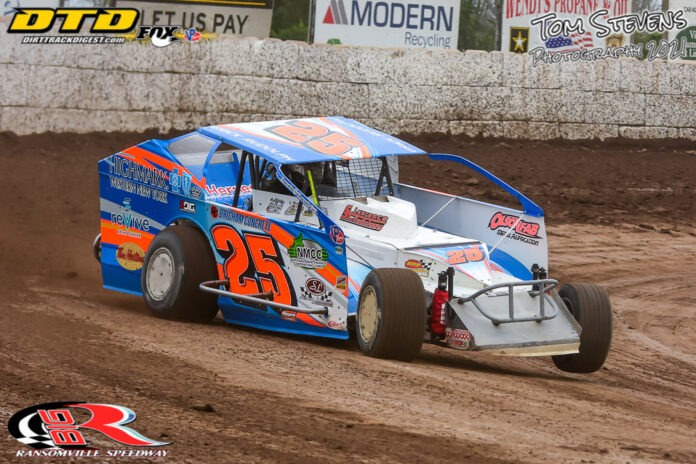 Erick Rudolph and James Sweeting brought the field of Krown Undercoating Modifieds to the green flag for their 30-lap feature event with Rudolph taking the lead as the field went four-wide behind him with Robbie Johnston, Jesse Cotriss, Chad Brachmann, and Sweeting. After Steve Lewis slowed on the front stretch, Rudolph would take off on the restart. Ryan Susice would take over second on lap eight and would set his sights on race leader Erick Rudolph. Rudolph would pull away as the field would stretch all around the speedway and would encounter lap traffic with ten laps remaining. Chad Brachmann slowed on the back straightaway to bring out the caution with four laps remaining due to an overheating issue aboard his Sunflowers of Sanborn number 3. On the restart, Rudolph would pull away from Williamson and would go on to score his fourth win of the season, Williamson, Susice, Sweeting, and Kyle Inman would complete the top five.

Dave DiPietro and Dylan Duhow were on the front row for the Investors Service Sportsman feature event with DiPietro showing the way. Brett Senek would quickly take over the second and would go after DiPietro. Cam Tuttle slowed on the front stretch to bring out the races’ first caution on lap six. On the restart, DiPietro and Senek would pull away from Austin Susice and Scott Kerwin. DiPietro would pull away from the field as Kerwin would battle with Senek for second. DiPietro would go on to pick up the feature win over Senek, Kerwin, Susice, and Andrew Smith.

The battle between Pete Stefanski and Jaren Israel continued in the KiPo Chevrolet Street Stocks feature as the duo battled for the lead in the early stages of the 20-lap feature. While Stefanski led the first four laps, Israel would take the lead away on lap five. Pat Dell spun on the exit of turn four to bring out the race’s first caution on lap nine. Anthony Guthrie spun on lap 11, as Israel continued to show the way. Stefanski would look under Israel for the lead on the lap 11 restart, but “Showtime” would keep the lead. Israel would go on to score the win, his fifth straight feature win.

Cole Susice would take off into the lead from the drop of the green in the Sunflowers of Sanborn Mini Stocks feature. Chris Miller and Dante Mancuso raced in second and third place respectively. The lead trio would battle for the lead throughout the feature distance. Mancuso would take second away from Miller and would challenge Susice for the lead. Susice would hold off Mancuso in the late stages to score the win.

Colby Adamczak and Brandon Close were on the front row for the Kevin’s Carpet Cleaning Novice Sportsman feature event with Adamczak in the lead. Close spun in turn one and with heavy traffic, Ken Washburn ended up on his side. Washburn climbed out of his car under his own power and assisted the safety crew putting his number 07 back on all four wheels. Adamczak and Sam Junkin would bring the field down to the green flag for the 15-lap feature when the field was reset, with Adamczak showing the way. Ken Camidge after battling with Sam Junkin for second place, would spin and bring out the caution. On the restart, heavy contact was made entering turn one and Sam Junkin would roll over the turn one wall. All drivers involved were alright. The final four laps would see Adamczak pull away and would pick up the victory, his first in the division.

Friday, July 23 will be the annual Sid and Carol Jeffery Memorial Night featuring a full card of racing. During intermission, a “pass the helmet” will take place to benefit Sportsman campaigner Darrell Borkenhagen, who suffered burns to his body following an incident in early July. The races will be streamed live on www.dirttrackdigest.tv Fans, drivers, and crews can listen to all the racing action on 96.5FM using their portable FM Radios while on the property. Pit gates open at 5 pm, grandstands open at 6 pm, and racing will get underway at 7:15 pm.