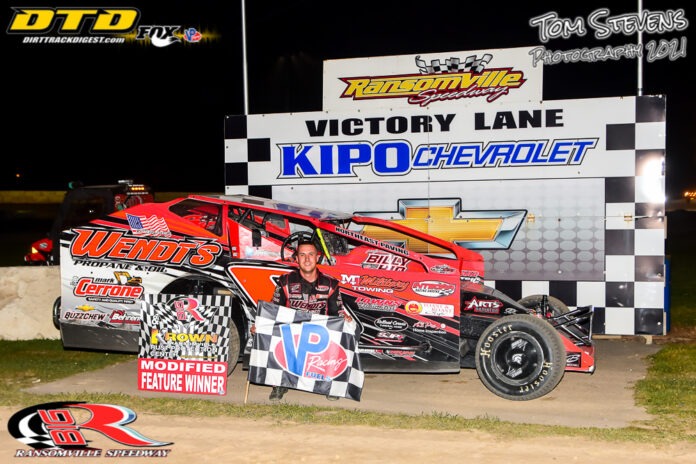 Andrew Smith and Allan Wills were on the front row for the 30-lap feature for the Krown Undercoating Modifieds and it was Smith showing the way. Mat Williamson would take over second with Chad Brachmann racing in third. Williamson would take over the lead after performing a slide job to Smith off-turn four. Off a lap six restart, Williamson would continue to lead with Ryan Susice racing in second. The red flag would come out on lap seven as Jeff Jepson spun, in turn, two, and Steve Lewis Jr, Nick Joy, and Rick Richner were all involved. All drivers climbed out of their cars under their own power, with Jepson and Lewis being able to continue racing. The restart would see Williamson back of front with Susice, Brachmann, Rudolph, and Robbie Johnston. Rudolph would take over third from Brachmann on lap 13, with Williamson and Susice pulling away from the field. Williamson pulled away to win his fifth feature of the season.

Steve Dixon and Austin Hauser brought the RUSH Late Models to the green flag for their feature event with Dixon showing the way with Jon Rivers taking over second with Paul Grigsby moving into the top three. Grigsby would then take over second from Rivers on lap five and would reel in race leader Dixon. Grigsby would catch Dixon and the two would battle for the lead. Bill Button would spin in turn two to bring out the caution on lap 11. Dixon would take off on the restart and David Pangrazio would challenge Grigsby for second. Grigsby would regain the runner-up spot and would battle with Dixon. Dixon hit the turn two wall and came to a stop to bring out the caution with two laps remaining. Paul Grigsby would hold off David Pangrazio to score the win.

Zach George and Scott Kerwin were on the front row for the Investor’s Service Sportsman feature event with Kerwin taking over the lead using the inside line. Austin Susice would take over second with George, Derek Wagner, and Cam Tuttle racing inside the top five. Dustin Gorhan came to a stop on the back straightaway to bring out the races’ first caution with 10 laps complete. Kerwin would take the lead off the restart as Susice, and Wagner battled for the second position. Brett Senek entered the top five after passing Zach George and Cameron Tuttle. Kerwin would drive away to his fifth win of the season.

Brian Melcher and Ryan Plante brought the Sunflowers of Sanborn Mini Stocks to the green flag for their feature event with Plante showing the way. Dante Mancuso would take over second with Cole Susice and Ashley Harbison racing inside the top four. Off a lap two restart, Mancuso and Plante battled for several laps for the lead. Mancuso challenged Plante for the lead throughout the 15-lap feature. Plante was able to pick up the win and then the motor went south, just as the race completed.


Jim Forster and Brandon Close was on the front row for the Kevin’s Carpet Cleaning Novice Sportsman feature event with Close showing the way. Close got loose off turn two and spun to bring out the first caution, just after Jake Bansmer took over the race lead. With Bansmer showing the way, Forster was able to pull away from Andrew Joy and Greenley George. The battle with Forster, Joy, and George continued for most of the feature distance. Casey Jonathan had issues, in turn, one to bring out the caution with two laps remaining. Bansmer would take off on the restart and would go on to score the win, his sixth of the season.

Ransomville returns to action on Friday, August 27th for a full card of racing plus the rescheduled Autograph Night. The entire racing program will be streamed live on www.dirttrackdigest.tv with pit gates opening at 5:00 pm, grandstands at 6:00 pm, and racing will get underway at 7:15 pm. A foot race will take place during intermission.

Did Not Start: Nevin Hazel

Did Not Start: Ken Washburn