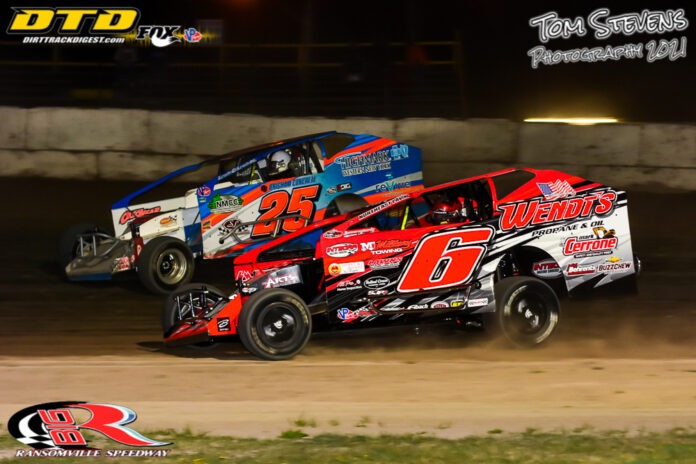 Andrew Smith and James Sweeting were on the front row for the 30-lap feature for the Krown Undercoating Modifieds with Smith showing the way. Ryan Susice moved into the third spot on the drop of the green, as title contenders Mat Williamson and Erick Rudolph started to wake their way through the field. By lap three, Williamson was fourth, and Rudolph and was running in position number six. Susice would waste no time and would take over the lead on lap number five, with Williamson closing in on Sweeting for third place. Williamson would complete the pass on lap six to take car #6 to third place and would quickly go after Smith for the second position. Williamson would take over second and would go after race leader Susice. Rudolph would take over fifth on lap 12. Allan Wills would hit the wall, in turn, one to bring out the caution on lap 12, erasing Susice’s nearly two-second advantage over Mat Williamson. The restart would see Susice and Williamson on the front row, with Williamson taking over the lead and Erick Rudolph would battle with Sweeting for third place. The top four would pull away from the rest of the field as Robbie Johnston and Jonathan Reid battled for fifth place. Reid would take over fifth on lap 19. While working lap traffic, Susice would start to reel in Williamson, but Williamson would go on to score the win, his sixth Ransomville triumph of 2021, and second in a row.

Going into the regular-season finale next Friday night for the Krown Undercoating Modifieds, Williamson holds a 2 point lead over Rudolph, and a 24 point lead over Susice.

Cameron Tuttle and Noah Walker were on the front row for the Investor’s Service Sportsman feature event with Tuttle showing the way. Brett Senek and Derek Wagner would battle with Walker for second place early in the 25-lap feature go. Brett Martin slowed to bring out the caution on lap three. On the restart, Tuttle and Wagner would pull away from the field as Dylan Duhow, Brett Senek, and Walker raced in the top five. Jake Bansmer spun, in turn, one and Brian Harris, David Fingerlow, and Jordan Moden all got collected on lap nine. All drivers were okay after the altercation. Harris and Fingerlow were able to continue racing. The lap nine restart would see Senek go three-wide with Duhow and Wagner and battle for second place, with Wagner taking the position away. Scott Kerwin would enter the top five after battling back and forth with Dylan Duhow. Tuttle would start to pull away from the field at the races’ halfway point. With the top four of Tuttle, Wagner, Senek, and Walker up front, Duhow and Kerwin continued the battle for fifth place. Tuttle would pull away from the field and would go on to score the win, his third of the season at Ransomville. Brett Senek is looking for his third straight track title and will head into season championship night next Friday with a 42 point lead over Derek Wagner, who is one point ahead of Scott Kerwin (-43 to Senek), and Cameron Tuttle is now 64 points behind Senek for the lead.

Bill Weller Jr and Cole Susice brought the Sunflowers of Sanborn Mini Stocks to the green flag for their 15-lap feature event with Weller taking the lead from his pole position. Dante Mancuso would take over third place from Matt Hornquist and would challenge Susice for second. Mancuso would take over second on lap two and would start to reel in Weller for the lead. With Weller and Mancuso well in command, Hornquist and Susice battled for third place for much of the feature distance. Weller would hold off Mancuso for his first Ransomville victory. When Weller pulled into victory lane, he had a flat left front tire.

Jim Forster and Brandon Close was on the front row for the Kevin’s Carpet Cleaning Novice Sportsman feature event, with Close taking the lead on the drop of the green. Andrew Joy spun, in turn, one to bring out the caution on lap five. Close would regain the lead on the restart, with Forster and Ken Washburn racing inside the top three, with Andrew Joy and Robert Henning racing in fourth and fifth place respectively at the halfway mark. Kenny Washburn III and AJ Busch got together in turn two to bring out the caution with three laps remaining. The late-race restart would see Washburn take over second and then Andrew Joy would take over the runner-up spot with two laps to go. Close would hit the wall and Joy would take over the lead. Joy would hold off Washburn to score his first Ransomville win. Heading into the night, Jake Bansmer had a 126 point lead, which would mathematically clinch the division’s title.

Ransomville returns to action on Friday, September 3rd as Hy-Tech Concrete and Krown Undercoating presents Season Championship Night for the 358 Modifieds, Sportsman, and Street Stocks. The Mini Stocks and Novice Sportsman are also on the card. To end the night, Triple T Auto Parts presents the $1,000 to win Demolition Derby. Rules for the demo derby are posted on www.ransomvillespeedway.com The entire racing program will be streamed live on www.dirttrackdigest.tv with pit gates opening at 5:00 pm, grandstands at 6:00 pm, and racing will get underway at 7:15 pm.