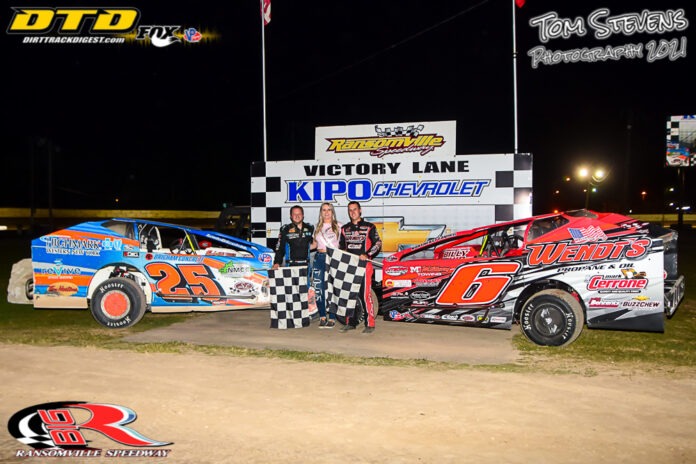 Greg Martin and Jonathan Reid were on the front row for the 30-lap feature for the Krown Undercoating Modifieds with Martin showing the way. Mat Williamson wasted no time to take over fourth place. Chad Brachmann would battle and take over the fourth spot, with Rudolph battling as well for a position inside the top five. As Martin continued to lead, Ryan Susice, Mat Williamson, Erick Rudolph and Chad Brachmann battled for positions three through six on the track for several laps. Brachmann would use the outside of the track to pass both Rudolph and Williamson and would challenge Susice around lap ten for third place. Meanwhile, Jonathan Reid would close in on Martin and would take over the lead on lap 11, with Susice, Brachmann, Williamson, and Rudolph racing in the top five.

With Reid starting to open up his advantage over the rest of the field, Chad Brachmann would take over second on lap 22, with Williamson and Rudolph trading the third position several times over the last half of the race. Reid would go on to score his first career Modified victory over Brachmann. Rudolph, Williamson, and Susice would complete the top five. With Rudolph finishing in third place and Williamson in fourth, the duo would tie in points and would be declared co-champions.

Brett Senek and Scott Kerwin were on the front row for the Investor’s Service Sportsman feature event with Senek showing the way over Kerwin, AJ Custodi, Dave DiPietro, and Cameron Tuttle early on. Kerwin and Senek pulled away from the field. Tuttle would move into third place on lap five. Jessica Kriegisch and Derrick Borkenhagen got together and spun to bring out the caution on lap six. On the restart, Senek would continue to lead over Kerwin, Custodi, Smith, and Tuttle. Kerwin would look to the outside of Senek and would take over the lead on lap 10. Derek Wagner would enter the top five for the first time on the night at the races’ halfway mark. Andrew Smith would take over third with ten laps remaining, with Wagner battling with Custodi for fourth place. Kerwin would hold off Senek to score his sixth feature win of the season. Senek would clinch his third consecutive divisional title.

Anthony Guthrie and Jaren Israel led the KiPo Chevrolet Street Stocks to the green flag for their feature event with Israel taking the lead. Brian Monahan Jr raced his way into the top five early on and was battling with Roger Israel and James Loveland for much of the feature distance. Israel was on cruise control all night, leading flag-to-flag to pick up his tenth win of the season. Guthrie would finish in second and be followed to the line by Pat Dell, Roger Israel, and James Loveland. The win for Israel would be his 60th career win in the Street Stock division and would earn him his first track championship.

Matt Hornquist took the lead early in the feature event for the Sunflowers of Sanborn Mini Stocks. Hornquist would lead off the lap one restart, with Chris Miller, Curtis Rung, Nick Tarnowski, and Dave Dussault racing in the top five. Nick Tarnowski would pass Miller to take over second on lap three, with Hornquist upfront. Hornquist would pull away from the field to score the victory.

Brandon Close and Kenny Washburn were on the front row for the Kevin’s Carpet Cleaning Novice Sportsman feature event with Close taking the lead from his pole position. Kenny Washburn raced in second and challenged Close for the entire distance. Close would go on to score the feature win for his first of the season.

Dylan Haniszewski was declared the winner in the Triple T Towing Demolition Derby, earning $1,000 for his efforts. Don Roesch was credited with second place, earning $500, and Austin Susice was credited with a third-place finish, paying $250 and Susice also earned the Heavy Hitter Award, paying $500.

Ransomville returns to action on Friday, September 10th as SANY New York presents the visit by the PA Outlaw 358 Modifieds, plus the first Sportsman/Novice shootout and the Mini Stocks. Highlighting the night will be a $750 to win event for the Street Stocks. Rules for this race has been opened to allow the Street Stock division from Genesee, Freedom, Land of Legends, Outlaw, and Woodhull to come and compete. The 30-lap feature will be in memory of Matteo Hope, who passed away unexpectedly. The entire racing program will be streamed live on www.dirttrackdigest.tv with pit gates opening at 5:00 pm, grandstands at 6:00 pm, and racing will get underway at 7:15 pm.

Did Not Start: Chuck Cala