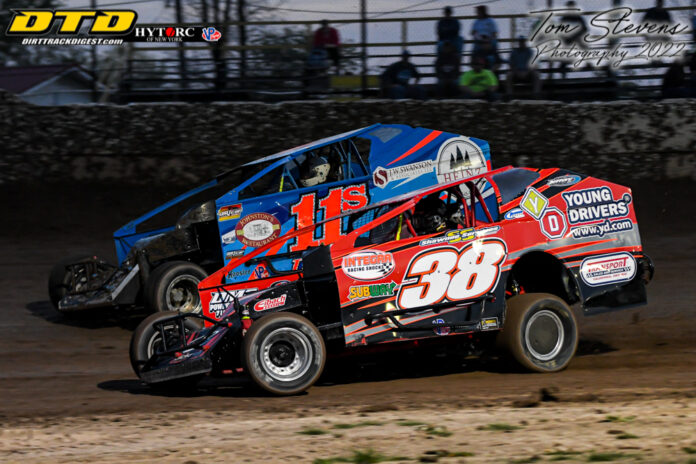 Ryan Susice and Andrew Smith Krown Undercoating Modified feature with Susice in the lead. The top three with Susice, Smith, and Jesse Cotriss would pull away from the balance of the field early on. 2021 divisional champion Mat Williamson had issues and pulled off the track on lap two, ending his night. Susice would continue to lead and would start to pull away from the field, as Chad Brachmann, Mike Bowman, and Erick Rudolph were all moving up through the field. Greg Martin spun in turn four on lap 13 and collected Rich Richner and Jonathan Reid. The restart would see Susice continue to show the way as Rudolph was making his move towards the top five. With Susice in command of the race, the battle was on behind him as Bowman, Brachmann, Rudolph, Cotriss, and Smith all raced inside the top six. At the race’s end, it was Susice collecting the checkered flag.

Jordan Moden and Dave DiPietro brought the Investor’s Service Sportsman to the green flag with Moden showing the way. Brett Senek got hung out of turn four and was in the moat that brought out the race’s first caution with four laps complete. Derek Wagner would move into third on lap five, just before the caution would come out as Dylan Duhow slowed in turn two. On the restart, Dave DiPietro would take over the race lead with Wagner taking over second, with James Friesen, Scott Kerwin, and Brandon Michaud running in the top five, with Moden falling back to sixth. Friesen would reel in Wagner and DiPietro for the lead with eight laps remaining. The lead trio would battle for the lead while fighting lap traffic throughout the duration of the event. DiPietro would hold off Wagner and Friesen to get the feature win. It was a special win for DiPietro who had the steering wheel that the late Alex Friesen made for the late Ray MacIver, and DiPietro was carrying the “68 over” number decals in honor of Friesen. Brandon Close debuted his new Investors Service Sportsman entry wrapped in a tribute to his uncle Wayne’s last Street Stock paint scheme. The Close Racing team did it in tribute to Cousin Melissa Close-Farmer who passed away after a courageous battle with cancer during the offseason. Melissa was a longtime member of the Ransomville Volunteer Fire Company.

Dennis Cummings and Randy Zimmerman set the pace in the KiPo Motors Street Stock feature with Cummings in the lead with Dan Schulz in second. Off a lap three restart, there was a three-car battle for the lead with Cummings, Schulz, and Josh Pangrazio. Simon Bissell and Randy Zimmerman got together on the front straightaway with Zimmerman ending up against the front straightaway wall with heavy damage to his car would slow the field down. After Schulz suffered a flat left rear tire, it was Cummings and Pangrazio battling for the win. The duo would encounter lap traffic with both drivers using every racing lane available in order to pass each other, but Cummings was able to hold off Pangrazio’s challenges. The last lap would see the duo leaning on each other exiting turn two, and doing the same exiting turn four, but it was Cummings holding off Pangrazio at the start-finish line to pick up his first Ransomville victory.

Don Hermanson and Austin Hauser were on the front row for the Sunflowers of Sanborn Mini Stock feature with Curtis Rung quickly getting into the lead. Rung would hang on to the lead as Brad Whiteside would take second away on a lap three restart. Opening night feature winner Chris Leone would challenge Dave Dussault for third as the lead duo would pull away from the field. Curtis Rung was able to hold off Brad Whiteside to score the feature win.

Next Friday, SANY New York presents the Mackenzie Kulesza Memorial for the Sunflowers of Sanborn Mini Stocks. A full card of Modifieds, Sportsman, Street Stocks, and Novice Sportsman will round out the racing program. Pit gates will open at 5:00 pm with grandstands opening at 6:00 pm and racing will begin at 7:15 pm.

Did Not Start: Brett Martin

Did Not Start: Brian Monahan Jr

Did Not Start: Ian Paul