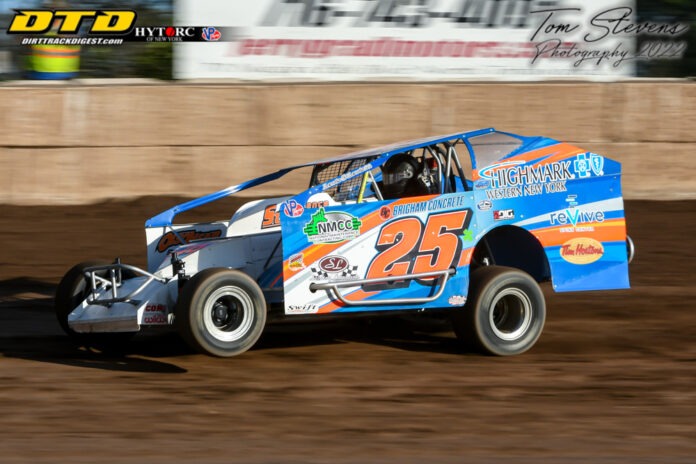 RANSOMVILLE, NY – Curtis Rung from Buffalo, NY won the Richard Wilkinson Memorial for the Sunflowers of Sanborn Mini Stocks on Niagara Metals, Jetport Restaurant, and Tim Hortons Night at the Ransomville Speedway. Third-generation driver Erick Rudolph from Ransomville, NY won his third Krown Undercoating Modified feature of the season. Cameron Tuttle from Wilson, NY won his second Investors Service Sportsman feature. Dan Schulz from Newfane, NY won his second KiPo Motors Street Stock feature of the season. Kasey Coffey from Caledonia, NY won his first Kevin’s Carpet Cleaning Novice Sportsman feature in his first start at Ransomville.  Kids in attendance had an opportunity to get a ride in a racecar prior to the start of the night’s racing program.

Ryan Susice and Greg Martin shared the front row for the 30-lap Krown Undercoating Modified feature event, with Susice showing the way over Erick Rudolph, Mat Williamson, Martin, and Pete Bicknell. Rudolph and Susice battled for the lead over the opening circuits. Rudolph would take over the lead on lap eight. Williamson would battle with Susice for second place, allowing Rudolph to pull away from the field. Williamson would move into the second position at the halfway mark, and Susice would then have to hold off the challenges of Pete Bicknell. Bicknell would take over third place with two laps remaining. Rudolph would score his third win of the season.

Cameron Tuttle and Dave DiPietro were on the front row for the Investors Service Sportsman feature, with Tuttle showing the way. Scott Kerwin would take over third on the start and would battle with DiPietro for second place early on. Tuttle would pull away from the field as DiPietro, Kerwin, Noah Walker, and Brett Senek raced in the top five. Kerwin would take over second from DiPietro on lap 16. Tuttle pulled away from the field and would go on to score the feature win.

Dan Schulz and Josh Pangrazio brought the KiPo Motors Street Stocks to the green flag, with Pangrazio showing the way. Pete Stefanski lost the handle of his car in turn four to bring out the caution on lap two. Pangrazio would pull away on the restart as John Zimmerman battled with Schulz for the second position. Schulz and Zimmerman battled for much of the feature race, allowing Pangrazio to pull away from the field. While in the lead, Pangrazio suffered a mechanical issue on the left front to bring out the caution with five laps remaining. The caution for Pangrazio allowed Schulz and Zimmerman to continue their battle, this time for the lead. Zimmerman would take over the lead on lap 16, but Schulz would take the lead on lap 17. Schulz would hold off Zimmerman to score the feature win

Ryan Plante and Andrew Cramer were on the front row for the Sunflowers of Sanborn Mini Stocks Richard Wilkinson Memorial, with Plante showing the way over Curtis Rung. Jake Soles hit the turn two wall to bring out the race’s first caution on lap two. Curtis Rung would take over the lead following the restart, as Matt Hornquist, Cole Susice, and Ian Paul raced inside the top five. Paul would bring out the caution on lap nine after hitting the turn one wall. Cole Susice would battle with Hornquist for third place on the restart, allowing Rung to get away. With Rung out front, Ryan Plante was holding off numerous challenges from Matt Hornquist, Cole Susice, Brad Whiteside, and Andrew Cramer throughout the second half of the race. Rung would pull away to earn his second win of the season.

Jim Forster and Justin Liechti shared the front row for the Kevin’s Carpet Cleaning Novice Sportsman, Colby Adamczak flipped several times in turns one and two and landed on all four wheels in turn two. Adamczak was alert and talking to track safety personnel and climbed out of his car under his own power. The restart would see Liechti in the lead, with Kasey Coffey taking over the runner-up position. Coffey would take over the lead on lap three. Coffey would pull away from the field to earn his first Ransomville checkered flag.

Next Friday, August 5th, VanDeMark Chemical and JAGG Electrical and Control will be presenting the racing program that features the Krown Undercoating Modifieds, Investors Service Sportsman, KiPo Motors Street Stocks, Sunflowers of Sanborn Mini Stocks, and the Kevin’s Carpet Cleaning Novice Sportsman. Pit gates will open at 5:00 pm with grandstands opening at 6:00 pm and racing will begin at 7:15 pm.

Did Not Start: Dillon Adamczak