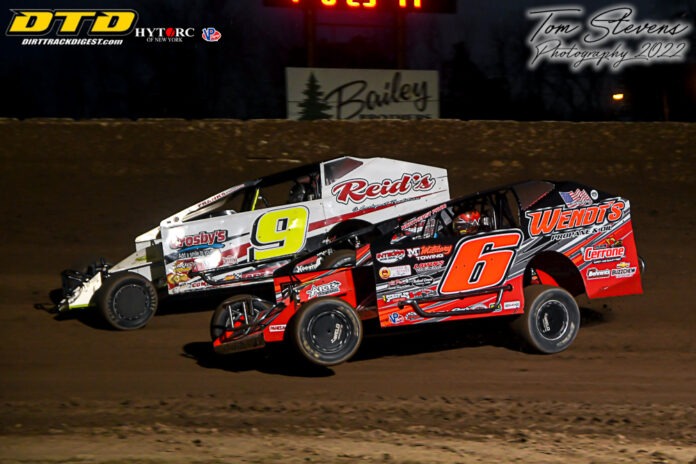 Erick Rudolph and Ryan Susice were on the front row for the Krown Undercoating Modifieds feature, with Rudolph ahead of Susice, with Jonathan Reid, Mat Williamson, and Chad Brachmann racing in the top five. Rudolph would pull away from the field, as the closest battle was for sixth place between Steve Lewis Jr, and Jesse Cotriss, with Lewis holding Cotriss off. Cotriss would move into the sixth position on lap 12, as the top five pulled away from the field. Susice would reel in Rudolph over the second half of the race, as Williamson moved into third place on lap 21. Susice would look to the inside of Rudolph for the lead and on lap 28, Susice would take the lead away from Rudolph in turn three. The two would battle and on the final lap, Susice and Rudolph would tangle as Rudolph was trying to regain the lead in turns three and four, and Williamson would go to the outside to take the lead and the win, his sixth of the season.

Noah Walker and Justin McKay brought the Investor’s Service Sportsman to the green flag, with Walker showing the way. Cody McPherson would take over second place and would reel in Walker for the lead. Brett Senek, Justin McKay, and Derek Wagner battled for third place for several laps. As those three battled, Noah Walker and Cody McPherson pulled away from the field. While encountering lap traffic, Walker was able to open up the lead. Senek would be able to take over third place, as the top two of Walker and McPherson pulled away from the field. Bill Gill spun in turn two to bring out the caution on lap 18. Walker would take the lead on the restart and would go on to score his first Ransomville win.

Tommy Bowen and Josh Pangrazio set the pace in the KiPo Motors Street Stocks feature event, with Pangrazio jumping into the lead. Pete Stefanski, Dan Schulz, and Bowen went three wide for third place early on, Schulz would take over third on lap four, just as Pangrazio would start to pull away with Simon Bissell racing in second place. After a lap seven caution, Pangrazio jumped into the lead as Pete Stefanski and Schulz would battle for third place. Schulz would take third away from Stefanski, and then would go after Bissell for second. Pangrazio would drive away to the win and clinch the divisional title.

Noah Mamo and Luke Blose were on the front row for the Kevin’s Carpet Cleaning Novice Sportsman, with Mamo showing the way. Abby Castile would take over second from Blose, with Colby Adamczak running in third place. Castile and Adamczak battled for second place for most of the 15-lap distance. Mamo would go on to score his fifth win of the season and would clinch the track title by two points.

Chris Leone and Ryan Plante were on the front row Sunflowers of Sanborn Mini Stocks feature, with Leone taking the lead. Don Whiteside raced in third and was given chase by Dave Dussault and Cole Susice. Leone would open up his lead over the field early on. Whiteside would take second away from Plante on lap five. Leone would pull away from Whiteside, Plante, and Matt Hornquist at the race’s halfway mark. Leone would drive away to his third win of the season.

Racing action returns on September 9 for the Mateo Hope Memorial Street Stock King of the Hill. There will be a $2,000 to win Big Block/Small Block Shootout, as well as a Sportsman/Novice Shootout. The Sunflowers of Sanborn Mini Stocks will decide their 2022 champion. Pit gates open at 5 pm, with grandstands opening at 6 pm, and racing getting underway at 7:15 pm.

Did Not Start: Andrew Smith

Did Not Start: Greenley George