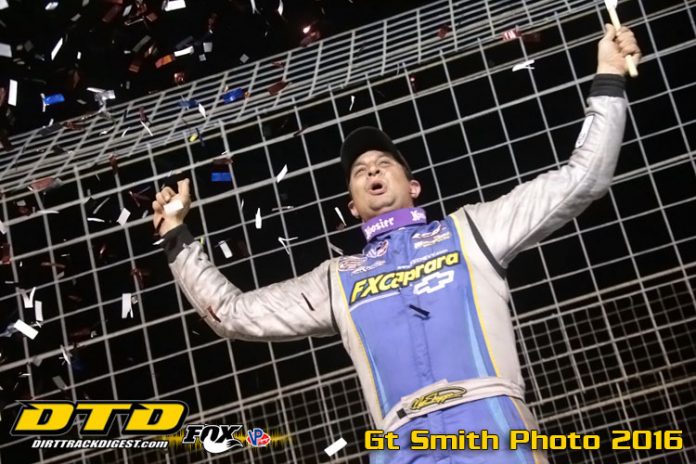 CONCORD, NC – Matt Sheppard, the driver of the FX Caprara No. 9s Big Block Modified, made a mark in history this weekend as he broke a record and won his fifth Super DIRTcar Series Championship. Sheppard proved once again that he was the man to beat Saturday night during the Bad Boy Off Road World Finals at The Dirt Track at Charlotte.

“This place was so racy tonight,” said Sheppard in victory lane. “These big blocks put on a heck of a show tonight. We were racing two, three, four wide there. Last time we started on the pole and led the whole race. I was happy to get that win and tonight was even more satisfying. Starting in the back a little bit further and driving through the field. I just can’t say enough about this racecar. It was just fantastic.”

Pat Ward and Justin Haers led the 29-car field to the initial green flag. On the drop of the green, a four-car battle for the lead emerged as Ward, Hears, Brett Hearn and Billy Decker all ran wire-to-wire – until Haers took the lead and pulled away from the field on lap two.

Decker, who started fifth, slid his way into third as he began to chase down Ward.

It didn’t take long for eighth place starter, Sheppard, to make his way into the picture as he slipped his way under Tim Fuller and advanced into fifth on lap ten.

The first caution of the night was brought out due to a slow moving Mike Mahaney.

Racing once again resumed but not for long as Ryan Watt made hard contact with the turn one wall on lap 12.

The third restart of the night saw Hearn running the outside line as Sheppard tried to sneak up underneath him. Hearn didn’t give up that easily as he managed to close the door on Sheppard.

Justin Haers held a steady lead at the halfway mark over Ward, Decker, Hearn and Sheppard.

The battle for third began to heat up as Hearn and Sheppard started closing in on Decker on lap 24.

Wight soon made his way into the picture as four cars began to battle side-by-side for the third position.

As the battle for third continued, Haers caught the back end of the pack with just eight laps remaining.

Sheppard was a man on the move as he moved his way into third on lap 32 then soon began to close in on Ward.

Sheppard charged hard into one and slid up out of two to pass Ward for second on lap 35.

Haers got out of shape coming out of turn four and Sheppard was there to take advantage. Sheppard blew by Hears on the front stretch and went on to take the lead on lap 36.

Another yellow was thrown with two laps to go due to a slowing Tyler Dippel.

Ward took advantage of the lap 38 restart as he drove by Haers for second, setting his sights on Sheppard.

Ward ran out of time and fell one spot short as Sheppard crossed the line first over Ward, Haers, Hearn and Wight to sweep the weekend at The Dirt Track at Charlotte and to capture his fifth Super DIRTcar Series Championship.

“It’s like we flipped a light switch there about halfway and that thing just took off like a missile,” Sheppard said. “When I could see Justin and Pat there I wanted to win this race again. I didn’t want to settle for third. Thankfully this car was good enough that we could do it.”

Ward had a competitive car as it showed this weekend during World Finals by placing his No. 42p Big Block Modified in the top five in both features.

“Sheppard has had a very dominant car. You can’t say enough about the way he’s been running,” Ward said. “Justin bobbled one time and it just happened to be when Matt was up under me and I was just kind of hoping Justin did that sooner so I could get by. It was a heck of a race between the three of us.”

Friday nights second place finisher was looking to get the job done and move one spot forward but ended up closing out the season with a third place finish.

“We’ll take it. We were on a little bit different tire than Pat and Matt,” Haers said. “I wanted to move down because the top was getting so far out there, my right front was harder than both of these guys. I just couldn’t turn anymore, then I’d get lose up off.

A true podium finish in Charlotte, we can’t complain.”

“I honestly didn’t know how many laps were left,” laughed Sheppard. “I knew there couldn’t be a ton. I was running just as hard as I could and luckily we were able to get to the lead. When we got the lead it was kind of a sigh of relief. Again, I didn’t want to see that yellow at the end but just like last night this car is so good. It felt good to win the race last night but to do it the way we did it tonight felt even better.”

Sheppard proved early on in the season that his new team combination was a force to reckoned with. “It’s kind of funny, we started off good in Florida and came out strong. Then the first series race at Fulton I think I finished seventeenth or something, it was awful. Then after that it was like we just really got rolling. I mean twelve series wins in one year, wow, that’s unbelievable. I think we even had four or five seconds too. When you can finish first or second in 17 of the races that’s pretty impressive. It just goes to show we built a potent team this winter. We had all the right parts, crew, car, engines, the whole deal. Everybody and everything did its job. It’s just a dream season.” 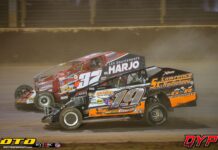 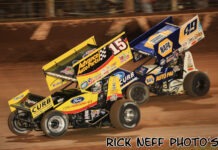 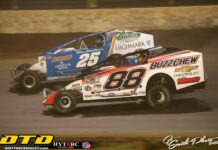