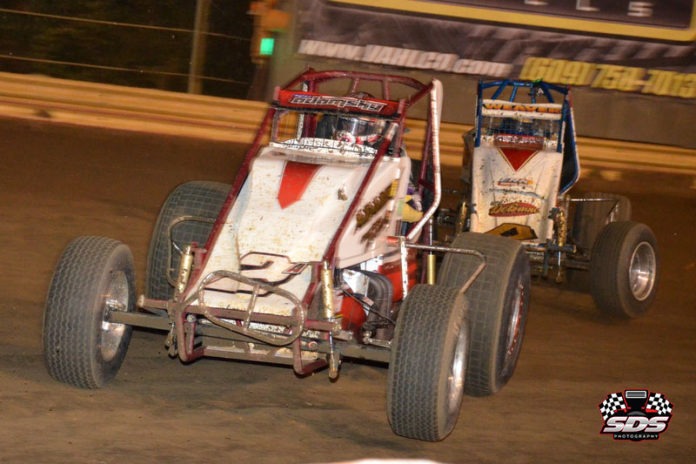 PULASKI, PA – The Sweeney Chevrolet Buick GMC RUSH Sprint Car Series powered by Pace Performance held an inaugural informational seminar on Saturday, March 3 at Gatherings Banquet & Event Center located near New Castle, Pa. The seminar for the Series that will debut in 2018 was well attended by many prospective racers as pertinent information was distributed and discussed.

The seminar was organized and hosted by RUSH Series Directors Vicki Emig and Mike Leone. Pace’s Director of Circle Track Development, Don Blackshear, was part of the panel and explained the facets of RUSH’s required GM 602 engine package by Pace. Weekly Series sponsor, Scott Bonnell of Bonnell’s Rod Shop, made the trip down from Fairview, Pa. and expressed his enthusiasm and support of the division. Two of RUSH’s Authorized Repair Facilities, Jennerstown Engine Technologies and Race 1, were also present.

The prospective racers in attendances included a melting pot of various backgrounds and experience levels. These drivers are viewing the RUSH Sprint Cars as either a great opportunity to either advance in their racing careers or the ability to be able to continue to race with an affordable division . Attendees received a considerable amount of handouts including a detailed informational sheet on the division, a Pace Performance RUSH Sprint Car engine package sheet, information on the Bilstein Shocks from rep Jim Hiland, and a tentative set of rules. That information is now available online at www.rushsprintcars.com.

“It was great to see such a diverse group of racers turn out for the seminar,” acknowledged Emig. “I can honestly say I was really surprised that the majority of attendees were new faces and racers that we were not previously aware were interested and already committed to the division. Since the announcement, we’ve been receiving calls, e-mails, and social media messages nearly on a daily basis from interested racers. I really believe the RUSH Sprint Car package is spot on in creating an extremely affordable way for individuals to go Sprint Car racing. It simply has all the right components to help control costs; the Pace Performance RUSH Sprint Car engine, Bilstein sealed/spec shocks, Hoosier spec tire, and a controlled spec fuel program. This program is going to level the playing field right out of the box and put the racing back into the driver’s hands!”


“I’m very excited about this program and proud to be able to offer support,” said Bonnell. “Vicki and the RUSH team have a proven record of success and always do what they say they are going to do. I believe this division will be no exception. This is going to be an exciting division for the fans as well as with it being non-wing offering a different product and even better racing.”

The Sweeney RUSH Sprint Cars will debut in 2018 throughout the western Pennsylvania and eastern Ohio region with the ability of its technical rules package to be adopted throughout the country. The RUSH Sprints will feature traditional, non-wing cars utilizing the cost-effective Pace Performance GM 602 Crate Sprint Car engine package developed by the team at Pace Performance utilizing RUSH Methanol Eco Fuel on $135 sealed, spec RUSH Bilstein Shocks, and an affordable spec Hoosier Tire. The program will be kicked off with the Bonnell’s Rod Shop Weekly Series point fund of more than $20,000 with $5,000 going to the inaugural champion!