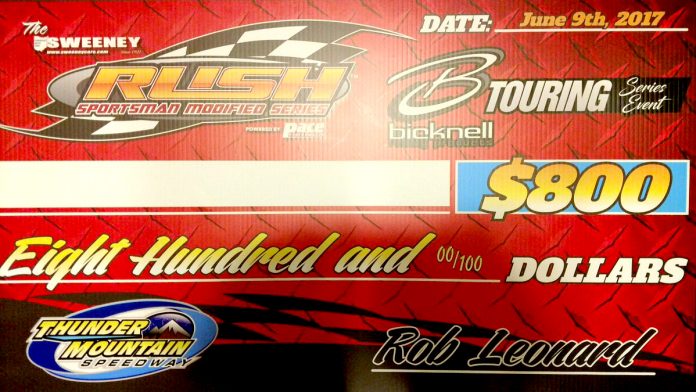 In 2016, Thunder Mountain hosted two Bicknell Weekly Series events paying $500 to-win. Adam Hilton topped an 18-car field in the first ever race at the facility on June 17, and then Brian Schaffer captured the July 29 event over a 17-car field. A total of 22 different drivers participated in the two events. Schaffer would go on to win the Bicknell Weekly Series Championship.

“We’re looking forward to kicking off our Touring season for the Sportsman Modifieds on Friday,” acknowledged RUSH Series Director Vicki Emig “New promoter, Rob Leonard, stepped up to host our first ever Touring Series race at Thunder Mountain and is excited to open our season with an $800 to-win event. Thunder Mountain also has us on the card for a Weekly Series race paying $500 to-win on August 11. Thunder Mountain is a smooth and racey track that should put on a great show on Friday night, and we expect a great field of cars.”

Ten Bicknell Tour events have been completed in two years with six different winners. New York drivers Greg Martin and Adam Hilton each have a pair of victories as well as Nick Ritchey and Kugel. Chas Wolbert and Chelsie Kriegisch also have victories. Kriegisch made history last year when she became the first female to win a Touring Series event in the 10-year history of RUSH and was also the first female to ever win at Expo.

Friday’s program will include warm-ups, heat races, a K&N Dash, possible B main, and a 25-lap feature paying $800 to-win, $125 to-start (complete payoff posted below). The K&N “Cold Air Induction” Dash will be run for the first four drivers that finish outside of the feature redraw spots and will pay $100 K&N certificate to win, $50 K&N certificate for second with $25 cash going to the third and fourth place finishers.

RUSH Officials will choose the “Maxima Performance” Award for a driver that exhibits a performance worthy of such for both divisions. The winner will receive a free case of either Maxima Semi-Syn High Performance Racing Oil or Maxima Performance Racing Oil of your choice. In addition, the winner will receive one can of SC-1 clear coat, one 16-oz bottle of Maxima Cool-Aide concentrate, one 32-oz quart of Maxima PSF power steering fluid, and a Maxima t-shirt. The value of this prize package is $170!

You do not have to a member of RUSH to compete. The AMB/MyLaps transponders are required. RACEceivers are always mandatory. The entry fee is $35. Pit passes are $30. Pits open at 5 p.m. with warm-ups at 7 and racing at 7:30.

Thunder Mountain is a 3/8-mile dirt track that was built in 2005, and is in its first year under the leadership of Rob Leonard. The track is located at 3406 Ramsaytown Road, Brookville, PA 15825. For more information, check out their website at www.thundermountainspeedwaypa.com and like them on Facebook at www.facebook.com/rmmotorsportsllc.