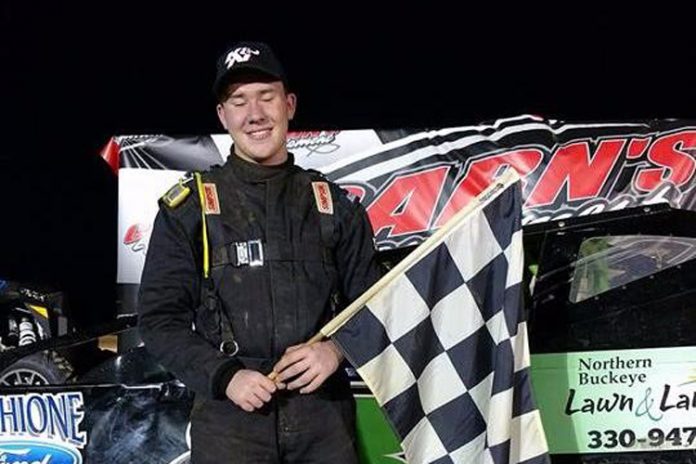 KNOX DALE, PA – The Sweeney Chevrolet Buick GMC RUSH Sportsman Modified Series powered by Pace Performance headed to Thunder Mountain Speedway on Friday night. It was the opening event on the 2017 Bicknell Racing Products Touring Series schedule and the first ever Tour appearance at 3/8-mile oval located south of Brookville, Pa. Twenty-six cars turned out from all over western Pennsylvania and eastern Ohio on a very weather threatening night.

Kyle Martell survived a wild season opening Bicknell Touring Series feature event to be credited with the rain-shortened 22-lap victory. The 2016 “Futures Cup” Champion led for the majority of the race until Rocky Kugel and Brian Schaffer got by late in the event. Schaffer and Kugel then tangled before a rain shower moved over the speedway, and Martell was awarded the $800 victory and also named the Maxima Racing Oil “Maximum Performance” award winner.

“This is amazing,” expressed the 17-year-old Rootstown, Ohio driver. “I don’t want to win like this, but I’ll take it. To win in this Series means a lot especially racing with all of these guys. I spun my tires on that one restart and that allowed Rocky to get by, and then on the last one I hit a bump and it didn’t allow me to challenge for the lead. I’d like to thank all of my sponsors and my family for supporting me.”

Martell drew the pole position and raced to the early lead, while Blaze Myers and Nick Ritchey got by Jessica Shea before she stopped to bring out the caution with one lap scored. The 13-year-old Myers would get sideways racing off turn four on lap four allowing Nick Ritchey, Kugel, and Jerry Schaffer by for positions two through four. Eighth starting Jeremy Weaver entered the fray on lap seven when he moved by Schaffer for fourth.

Ritchey would lose the handle in turn two to bring out the caution with 10 laps scored, which moved Kugel to second, Weaver to third, and 18th starting Brian Schaffer into fourth over his uncle Jerry Schaffer. The two Schaffers put on a great race trading the fourth positions four more times over the next eight laps until Brian got by for good on lap 18.

A caution for Jordan Ehrenberg would prove key as on the ensuing restart, Kugel used the outside to power into the lead as Martell spun his tires. Kugel, who won four Bicknell Weekly Series events in five tries to date this season, looked primed for his third career Tour win; however, Brian Schaffer found moisture on the cushion as he drove around Weaver for third on lap 21 and then around Martell for second one lap later.

Despite starting 18th, it appeared that defending Bicknell Tour and Weekly Series Champion, Brian Schaffer, had the fastest car as he quickly tracked down Kugel. Schaffer though got into the right rear of Kugel on the frontstretch getting Kugel sideways and eventually flipping hard into the turn one pit exit. Kugel exited his mangled car displeased before being transported for further evaluation and then released from the hospital. Though he continued on without stopping, Schaffer was put to the tail.

Under red, the light rain which had been falling off and on during much of the feature intensified and the decision was made to end the event with Martell’s Sarchione Chevrolet/Sarchione Ford/Northern Buckeye Lawn & Landscape-sponsored, Tim Martell-owned #8 credited with his biggest career win. Nearly one year ago, June 18 to be exact, Martell won his first career feature taking the victory at Sharon Speedway in Bicknell Weekly Series action. Martell now becomes the seventh different driver to win a Bicknell Tour event in the 11 races run all-time.

Weaver was second for his best career Bicknell Tour finish. Anthony Gillespie raced from 11th to third in John B. Smith’s #3G. Shayne Izzo came from the 16th starting spot to fourth to earn the $100 Precise Racing Products “Pedal Down” Hard Charger gift card. After getting caught up in an accident on lap 17, Brandon Ritchey fought back to finish fifth in the final five laps and was awarded the Sherwood Wheels “Man of Steel”. Brandon’s cousin, Nick Ritchey, worked his way back to sixth after spinning out of second place. Kole Holden was seventh over Steve Slater. Kugel was credited with 10th and was awarded the TBM Brakes “Tough Brake of the Night. Brian Schaffer received the $25 CrateInsider.com certificate for being the final car on the lead lap.

Justin Shea, Kugel, and Chas Wolbert won the heat races. Chelsie Kriegisch won the K&N “Cold Air Induction” Dash to earn a $100 K&N certificate over Gillespie, who received a $50 K&N certificate for second. Brandon Ritchey and Billy Myers were third and fourth and will receive an extra $25 cash from RUSH.

The Bicknell Tour returns to action on Sunday night, June 19 for the first of two appearances at Tri-City Raceway Park. It’ll be a RUSH doubleheader with the Sweeney RUSH Late Model Tour also in action. The Modifieds will be racing for $600 to-win part of the annual “Bill Emig Memorial”- an event that pays tribute to the longtime car owner and father of RUSH Series Director, Vicki Emig.