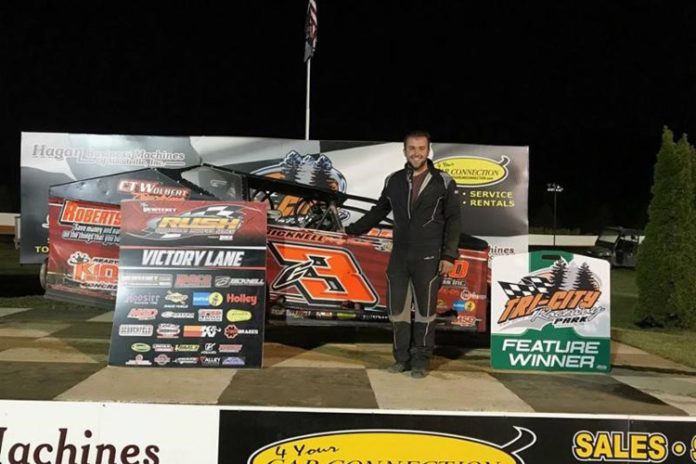 FRANKLIN, PA – The Sweeney Chevrolet Buick GMC RUSH Sportsman Modified Series powered by Pace Performance completed a busy weekend by heading to Tri-City Raceway Park on Sunday for a Bicknell Racing Products Touring Series show as part of the track’s annual “Applefest” event. It marked the second and final visit to the 1/2-mile Franklin, Pa. oval of the season and race #7 overall of 2017.

The 2017 season has seemed to be feast or famine for Chas Wolbert. The second year RUSH Sportsman Modified racer has been fast much of the year, but mechanical woes or accidents have kept him out of victory lane more than his speed has showed. Wolbert did pick up a pair of wins at Sharon Speedway and one at Pittsburgh’s PA Motor Speedway this season, and on Sunday night led all 20 laps of the feature holding off Justin Shea for his first career Tri-City win. The $600 victory was Wolbert’s second Bicknell Tour win of the season including the 2016 “Apple Festival Nationals” make-up race on August 5 at Sharon. Shea was selected as the Maxima Racing Oil “Maximum Performance” award winner.

“We’ve been struggling,” acknowledged the 23-year-old Warren, Ohio driver. “We’ve had a fast car week in and week out, been a tick off here and there, and have been in some accidents, but we made it here tonight. This is awesome! Ever since I was a little kid I heard about Tri-City, but never got a chance to come out here and watch until we started racing here. I’ve been good here, just glad to be standing here. I’m going to give my secrets away, but we put a hard right rear on tonight. With that red we had, the tire kind of sealed back over. I had to do all I could to get into the corners, because if I could get in, I could get out. I knew once I pushed, I had to get back down to the bottom.”

Wolbert redrew the pole and took off in the lead over Nick Ritchey. Shea started eighth and quickly moved forward. He was fifth after the opening lap, got by Josh Deems for fourth then passed Brandon Michaud for third on lap three. Brian Schaffer slowed on the frontstretch and exited to the infield on lap four, but not before A.J. Gillespie spun as he got on the binders to avoid hitting Schaffer. Schaffer was awarded the TBM Brakes “Tough Brake of the Night” as his disappointing season continued.


When racing resumed on lap five, sixth starting Martell passed Michaud for fourth. Shea meanwhile was all over Ritchey in the battle for second on lap six and one lap later Martell joined making it a three-car race. Shea made the pass of Ritchey for second on lap eight, but had a half-straightaway deficit to make up. On lap 12, Jessica Kriegisch made contact with Blaze Myers racing down the frontstretch and a seven-car melee ensued in turn one. Jessica’s sister Chelsie seemed to receive the brunt of the damage. She was also checked over by the EMT crew, but other than some bruises was okay.

The final nine laps went green-to-checkered. Martell was able to get by Ritchey on the restart for third. In the final laps, Shea made some advances and was within striking distance, but was unable to make a serious bid at overtaking Wolbert. Wolbert’s C.T. Wolbert Trucking/Russ King Racing/Ohio Intra Express/Kings Ready Mix Concrete/Crooked Pine Woodworking/955 Automotive/Kings Sanitary-sponsored #c3 took the checkered flag first by 0.976 of a second for his third career Bicknell Tour win, matching Rocky Kugel for most all-time in the Series.

After taking much of the summer off from competition, Shea has returned with vengeance recording a win and two runner-up finishes in the last three Bicknell Touring Series events. “I’m starting to make a habit of this the last three shows and wishing I would have raced a little more this year,” expressed the 36-year-old racer. “It is what it is though. It’s fun to play here at the home track. The right rear cooled off under that long red flag and really hurt us. I poked my nose in there once or twice, but didn’t have anything for Chas (Wolbert).”

Martell was third as he’s closing in the Bicknell Tour Championship with all top seven finishes in the seven events to date. Ritchey dropped to fourth, but matched his best Bicknell Tour finish of 2017 from June 26 at Tri-City. Deems was fifth for the second straight night. Michaud’s sixth was his best career Tour finish. Kole Holden, who leads the Bicknell Weekly Series standings, raced from 13th to seventh. Jerry Schaffer was a late arrival missing the pit draw, but came home eighth to receive the Sherwood Wheels “Man of Steel” honors. Billy Myers started 19th and finished ninth to earn the $100 Precise Racing Products “Pedal Down” hard charger gift card. Brandon Ritchey was 10th.

The Bicknell Tour was close out its season on October 13-14 at Lernerville Speedway with the annual “Steel City Stampede” paying $800 to-win; however, in the meantime, Bicknell Weekly Series action will take place at Lernerville Speedway on September 16, Pittsburgh’s PA Motor Speedway on September 23 and 30, followed by the first ever events at Mercer Raceway Park on October 6-7.