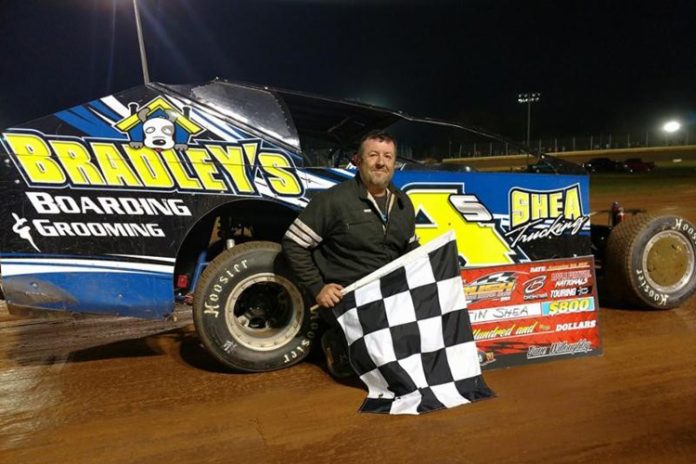 HARTFORD, OH – The Sweeney Chevrolet Buick GMC RUSH Sportsman Modified Series powered by Pace Performance headed to Sharon Speedway on Friday and Saturday night for a Bicknell Racing Products Touring Series event as part of the track’s annual “Apple Festival Nationals” for the fourth consecutive year. It marked the second and final appearance of the season to the 3/8-mile Hartford, Ohio oval and race #6 overall for the 2017 season. Heat races were contested on Friday night with the K&N Dash and 25-lap feature event on Saturday night.

After watching Steve Slater steal a win away from him on the outside coming down for the white flag at the last Bicknell Touring Series event on August 26 at Sharon, Justin Shea performed a similar pass of race-long leader Chelsie Kriegisch on lap 15 to score his first career Tour win. Shea earned $800 for his second career Sharon win in the 25-lap feature, and was also selected by Series Officials as the Maxima Racing Oil “Maximum Performance” awards winner.

“We haven’t run much this year but now I’m wishing we would have,” revealed the 36-year-old Franklin, Pa. driver. “This car is phenomenal. It was a little tight yesterday, but we made the right adjustments and here we are. Everyone was running the bottom so the only way to make headway is to try the middle or top. It really liked it so I stuck it out there and it worked. We have a short trip to Tri-City (Raceway Park) tomorrow- it’s about two miles from home. I have to thank my wife and father-in-law; they’ve been a huge help the last two days helping out.”

Several cars got bunched up on the initial start causing a five-car accident that ended the night early for several racers including Slater, who was selected as the TBM Brakes “Tough Brake of the Night” recipient after suffering severe damage. That would turn out to be the only stoppage of the main event as the 25 laps then went caution-free.


Chelsie Kriegisch and Tour point leader, Kyle Martell, were one-two after the opening lap. Shea meanwhile started fifth as him and eighth starting Chas Wolbert passed Jessica Kriegisch for third and fourth on lap two. Wolbert and Shea battled hard for third as they raced side-by-side. Wolbert would grab the spot on lap four as the duo closed in on Martell. Shea then moved to the top and drove around both racers to take second on lap 11.

Kriegisch meanwhile was up front setting a good pace in search of her first career Sharon victory; however, Shea stuck to the outside line and closed in every lap. He caught Kriegisch on lap 14 and made the winning pass driving around her in turn four to lead the 15th circuit. Shea had a half-straightaway lead when he caught lapped traffic with three laps to go. Traffic didn’t slow Shea’s run to the checkered flag as he won by a comfortable 2.589 seconds in his Shea Trucking/Bradley’s Boarding & Grooming-sponsored #14s.

Kriegisch was a Tour season best second. Wolbert, who won the $800 2016 “Apple Festival Nationals” Tour make-up on August 5, was third after passing Martell on lap 14. Sharon track champion, Kole Holden, came from 10th to finish fourth over Josh Deems as both racers dropped Martell to sixth late in the event. It was a big night of racing for Deems, who also competed in the Big-Block Modified non-winners program with his “358” small-block. Deems had worked his way to second before getting spun, but would battle back for a fourth place finish to give him two top five finishes on the night. That effort got him selected as the Sherwood Wheels “Man of Steel” award.

Completing the top 10 were Brian Schaffer, Jessica Kriegisch, Rocky Kugel, and Brandon Ritchey. After getting caught up in the opening lap accident, Shayne Izzo came back to finish 11th as the last car on the lead lap for the $25 CrateInsider.com gift certificate. Preston Cope raced from 21st starting spot to finish 12th, which was good enough for the $100 Precise Racing Products “Pedal Down” hard charger honors.

Chelsie Kriegisch, Wolbert, and Martell won Friday’s heat races over the 24-car field. Holden won his first K&N “Cold Air Induction” Dash of the season to become the sixth different winner in as many races. Holden received a $100 K&N certificate. Blaze Myers was second to earn a $50 K&N certificate, while Nick Ritchey and Izzo were third and fourth and added an extra $25 cash.