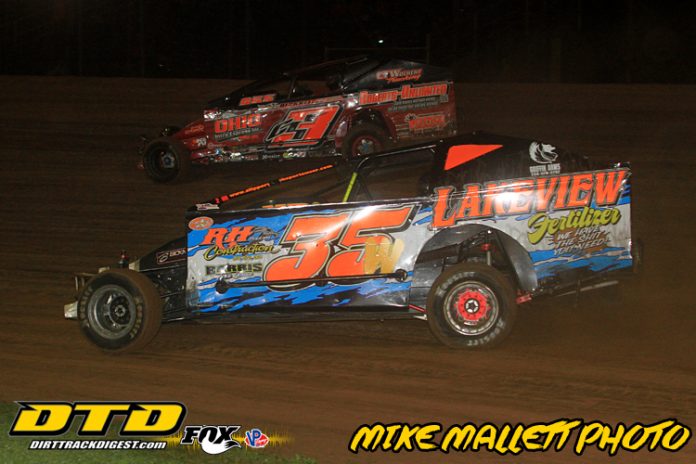 PULASKI, PA – With the successful 2017 racing season now completed, the fourth for the Sweeney Chevrolet Buick GMC RUSH Sportsman Modified Series powered by Pace Performance, Series Directors have made a decision to alter the driver eligibility requirements for the division for the 2018 season. All western Pennsylvania and eastern Ohio “358” Modified drivers will be eligible to participate in the class, and changes have been made to allow more of the regional Big-Block Modified drivers to be eligible for the entire season as well (see below).

“Due to the changing dynamics of Modified racing in western Pennsylvania and eastern Ohio we had to take a look at our driver eligibility rule that’s been in place since the inception of the division,” explained RUSH Director Vicki Emig. “Modified racing, both 358s and big blocks, is in a different place than it was when we announced the launch of this class at the end of the 2013 season. We’re very proud of the development of the Sportsman Modified division; our racers have come a long way since the first couple years. Our goal with RUSH in general is, and always has been, to keep racers racing by providing an affordable option.”

“Throughout the season we’ve received a lot of feedback from several of our own racers as well as 358 racers, and some big-block drivers expressing a desire for us to make changes to the eligibility rules,” continued Emig. “Some of these racers have inquired due to financial reasons, but several due to the decreasing number of scheduled events for open Modified racing. At the end of the year, we had standouts Alan Dellinger and Rob Kristyak get a head start on 2018 by joining the class; however, they were eligible per the 2017 rules.”


As stated, all “358” Small-Block Modified drivers from the local area will be permitted to race in the RUSH Sportsman Modified division in 2018. The change in eligibility will now allow local Big-Block Modified racers that did not finish in the top five in Big-Block Modified points at any speedway or touring series in the previous season the ability to compete provided they did not win four or more features in one of the past two years (2016 or 2017). Obviously, all drivers must have 100% RUSH Sportsman Modified legal cars to compete.

The RUSH Sportsman Modifieds completed 30 events in 2017 at a record eight different tracks; Sharon Speedway, Lernerville Speedway, Pittsburgh’s PA Motor Speedway, Tri-City Raceway Park, Mercer Raceway Park, Eriez Speedway, Thunder Mountain Speedway, and Expo Speedway. Also, a record 43 different cars were in action as this number has grown each year. Sharon Speedway, which ran the cars weekly, averaged a record high 24 cars per night with only one night under 20 cars for the second straight year. An all-time class record, 30 cars, turned out for the May 29 opener at Sharon.