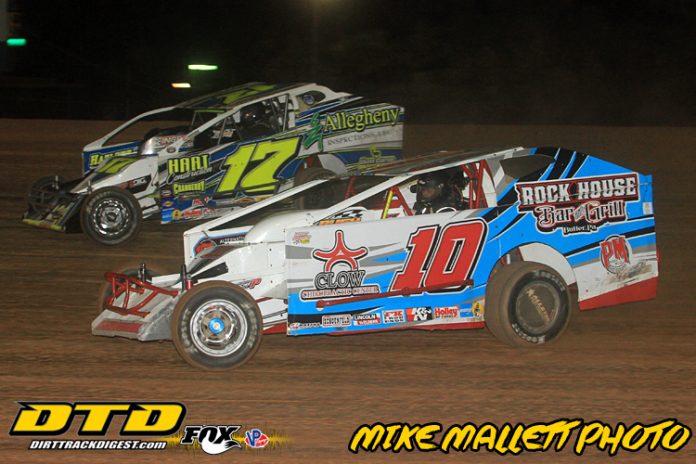 PULASKI, PA – While the 2017 season will officially wrap up with the awards banquet on January 20 at Gatherings Banquet & Event Center, Sweeney Chevrolet Buick GMC RUSH Sportsman Modified Series Directors have been busy planning for the upcoming 2018 racing season. The fifth season of operations currently has 30 events between Bicknell Racing Products Weekly and Tour Series shows scheduled at five different speedways. There’s the possibility of a couple additional events to be added.

Sharon Speedway will once again be the anchor home track for the RUSH Sportsman Modifieds. While the Mods will compete in most of the Saturday night “Steel Valley Thunder” weekly events for 2018, this year they have been added to the Friday, April 20 season opener with the Lucas Oil Late Model Dirt Series along with the traditional Ohio Speedweek event with the All Star Circuit of Champions Sprint Cars on Tuesday, June 19. Two Bicknell Tour events are scheduled at the Hartford, Ohio 3/8-mile; one on June 23 part of “Manufacturers Nights” presented by MSD Performance along with the “Apple Festival Nationals”. Details of the September 7-8 event have yet to be finalized.

The growth of the RUSH Sportsman Modifieds is evident through Sharon’s average car counts over the years. In the 2014 inaugural season, Sharon averaged 10.6 cars per night. The 2015 season saw the division officially added to the weekly program and increased to 14.3 cars per night. A huge growth took place in 2016 as the average soared to 22.5 per night. This past season saw another increase with an average of 23.9 per night. Impressively over the past two seasons, the car count was under 20 only one time each season.

Pittsburgh’s PA Motor Speedway continues to be a big supporter of the RUSH Sportsman Modifieds. “Dirt’s Monster Half-Mile” will host the class eight times on Saturday nights including four of the five Saturday nights in September. Six events were completed in 2017 at PPMS with five different winners. Sharon Speedway champion, Kole Holden, was the only repeat winner, while Rocky Kugel, Chas Wolbert, Jessica Kriegisch, and Justin Shea were also victorious.


Tri-City Raceway Park is another western Pennsylvania big half-mile track. Tri-City again has three shows for the RUSH Sportsman Modifieds planned, but this year all three (May 13, June 17 & July 15) will be Bicknell Tour designations for the first time.

The RUSH Sportsman Modifieds will again be part of Lernerville Speedway’s “Modified Mania” on Friday, July 20 then will close out the year once again with the “Steel City Stampede”. The exciting 2017 event saw Kugel charge through the field to finish second on the final lap to overtake Holden to win the $3,000 Bicknell Weekly Series Championship, while 2016 “Futures Cup” Champion, Kyle Martell, secured his first Bicknell Touring Series Championship.

Ohio Intra Express of Niles, Ohio will present the “Shock the Clock” award at selected Touring Series events in 2018. The fastest qualifier during warm-up groups will receive $100 cash and a presentation check. On these nights, the Sportsman Modifieds will mimic the RUSH Late Model Touring Series format with qualifying times setting the heat race lineups and the top two finishers of each heat race will redraw for the K&N Dash starting line-up that will determine the beginning rows of the feature. All of other cars will be straight up on heat race or B main finish. At this time, the format will be used at the three Tri-City events and “Manufacturers Night” at Sharon.

In October, the Series announced changes to the eligibility requirements. All western Pennsylvania and eastern Ohio “358” Small-Block Modified drivers will be eligible to participate in the class, and changes have been made to allow more of the regional Big-Block Modified drivers to be eligible for the entire season as well. The change in eligibility will now allow local Big-Block Modified racers that did not finish in the top five in Big-Block Modified points at any speedway or touring series in the previous season the ability to compete provided they did not win four or more features in one of the past two years (2016 or 2017). Obviously, all drivers must have 100% RUSH Sportsman Modified legal cars to compete.

“We’re very proud of our Sportsman Modified division,” stated RUSH Director Vicki Emig. “The class has grown each year in numbers and competitiveness, and we expect another bump in participation and quality of competition in 2018. It’s going to be exciting to see veteran racers Alan Dellinger and Rob Kristyak who entered the class in the final events of 2017, along with newcomers Garrett Krummert and Tony Tatgenhorst mix it up with our veteran Sportsman Modified racers, including many young guns who are beginning to make their mark in Modified racing such as Kyle Holden, Kyle Martell, the Kriegisch sisters and many more. We have to thank all of the participating speedways for continuing their belief in the RUSH Sportsman Modifieds and partnering with us to continue the growth and stability of the class for Modified enthusiast throughout the region.”


*Schedule is subject to change. Additional dates may be added