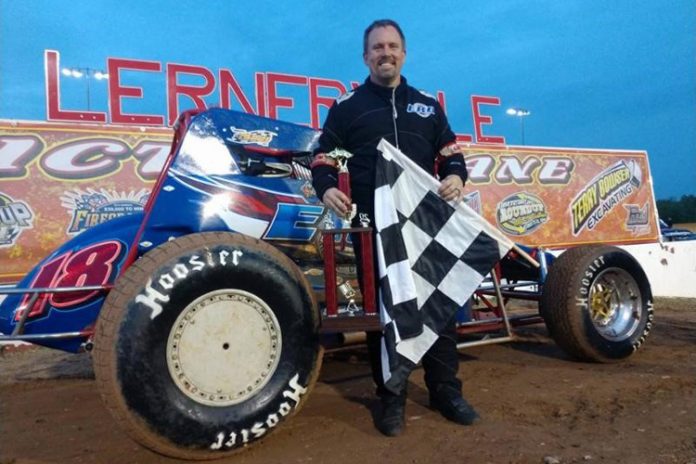 SARVER, PA – Fifteen months ago it was merely a concept, but on Wednesday night, May 16 after three rain outs the Sweeney Chevrolet Buick GMC RUSH Sprint Car Series powered by Pace Performance finally hit the clay at the renowned Lernerville Speedway for the first ever Bonnell’s Rod Shop Weekly Series event.

When all was said and done, Arnie Kent will go down in the history books as the first ever winner in the new RUSH Series. The New Castle, Pa. veteran racer may have led all 20 laps, but had to hold off a furious charge by fifth starting Gale Ruth, Jr. and young Dalton Daniels.

Kent’s margin of victory in his Equipment Rentals-sponsored #18 was by a mere 0.139 of a second! The 53-year-old now takes the early lead in both the $5,000 to-win Bonnell’s Rod Shop Weekly Series and $1,000 to-win “Wednesday Night Lightning” Championship point funds! Ironically the victory was Kent’s first ever at Lernerville despite competing at the track on and off for 20 years in the “410” Sprint division.

Fun, competitive, and great side-by-side racing were the words uttered the most by racers and spectators. The concept exceeded all expectations despite being the first night of racing for all the drivers. These traditional non-wing Sprint Cars feature the Chevrolet Performance 602 crate engine ($5,179 base or $7,850 for the complete dressed package), $135 sealed/spec Bilstein Shocks, affordable spec Hoosier Tires, and the new RUSH “Visual” Methanol. One of the racers even commented that he couldn’t believe he only used four gallons of methanol for the 20-lap feature!


The fastest lap of the night was turned in the feature by Ruth with at 16.794 faster than the RUSH Late Models with Chevrolet Performance 604 crate engines have ever turned during qualifying at Lernerville. The fastest laps by the majority of the competitors stayed consistent all night and were all within two to three tenths of each other.

“We really couldn’t have asked for anything more,” stated RUSH Director Vicki Emig. “We knew these cars would put on great racing, but I don’t think any of us expected what we witnessed out of the box on Wednesday. The veterans and youngsters were mixing it up, and no one broke away in any of the races. There was only one caution all night and no one got lapped. It was event three-wide on the first lap of the first heat! To have the entire field in both heat races separated by less than a straightaway, and to have three cars racing for the win on the final lap with the margin of victory just over a tenth of a second was incredible.”

Despite threatening weather and work duties for a few racers, 12 cars turned out for the inaugural event with several more expected in the coming weeks. The field was made up of veteran “410” racers like Kent, Ruth, Mike Lutz, and Joe McEwen, veteran Micro Sprint racer Dave Hawkins and his son Scott. Young Tyler Powell, who competed in Mini Stocks and E-Mods, along with former Stock Car racer Shawn Smith. Then you had Daniels, Zach Morrow, and Darin Gallagher, who have raced in various Sprint Car classes over their young racing careers. And finally Steve Cousins, who is a raw racing rookie, but certainly had no fear.

After two excellent, competitive non-stop heat races won by Kent and McEwen, the feature saw Kent jump out to the early lead after passing Daniels on the opening lap. The only caution of the night was for Darin Gallagher, who stopped after contact and losing his brakes with two laps completed.

When racing resumed, the fifth starting Ruth took over third. By lap five, Kent, Ruth, and Daniels opened up some ground from the rest of the field. Ruth worked his way by Daniels for second on lap six. Ruth went after Kent and was all over the leader for the duration as Daniels watched just behind in third. Ruth tried everything, but was unable to make the pass as he settled for second over Daniels. Dave Hawkins beat his son Scott across the line for fourth.

It was also great to not only see a lot of current “410” Sprint racers helping out the RUSH Sprint drivers, but also racing greats like Jack Sodeman, Jr., Andy Lutz, Mark Cassella, Jack Pears, and Don Gamble all taking in the action.

“There’s numerous people we’d be remiss not to mention,” continued Emig. “First the 10 tracks that came on board to give us 27 events this season- especially Lernerville, which became our anchor track with 10 events including these Wednesday night shows. Our great sponsors like Sweeneys and Pace Performance along with Bonnell’s Rod Shop that helped increase the point funds. Then we have people like Don Blackshear of Pace, Neil Cowman of Hoosier, Jim Hiland of Bilstein, and Bruce Insinger of Insinger Performance that all got together and through testing came up with this tremendous, cost-containment division. We continually get calls and messages from people that are looking at getting into the RUSH Sprint Cars. We feel this division has the potential to grow faster and bigger than our others.”

The RUSH Sprint Cars will be at Old Bradford Speedway on Sunday (May 20) for a $600 to-win, $150 to-start Bonnell’s Rod Shop Weekly Series special event. Next Saturday (May 26), they’ll make their debut at the “Monster Half-Mile” at Pittsburgh’s PA Motor Speedway. The next “Wednesday Night Lightning” event for the Sprints at Lernerville will be on June 20 as part of the RK Virgile “Wednesday Night Can’t Wait For The Weekend Mayhem Series”.