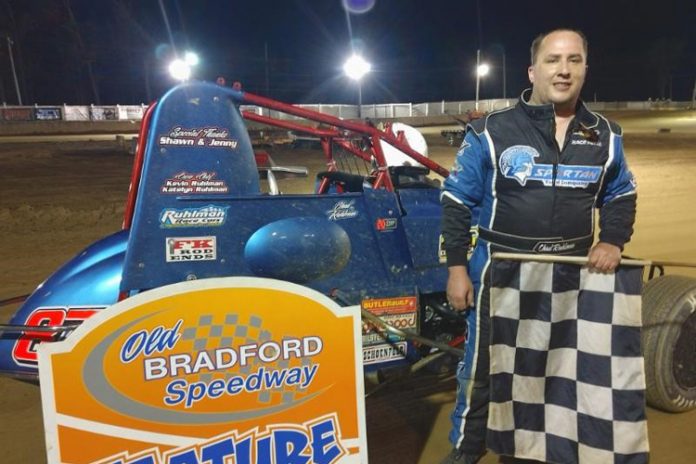 BRADFORD, PA – The Sweeney Chevrolet Buick GMC RUSH Sprint Cars powered by Pace Performance made their first ever appearance on Sunday at Old Bradford Speedway for the first of two Bonnell’s Rod Shop Weekly Series special events for the wingless warriors at Norm Asel’s quarter-mile bullring. After three rain outs to start the season, the RUSH Sprints completed their second event following up on an exciting debut at Lernerville Speedway the prior Wednesday.

Chad Ruhlman has made a name for himself over the years in Super Late Model and Modified competition picking up prestigious wins and championships in both classes including the famed Eldora Speedway. Years later, Ruhlman thrilled fans with his exciting performances in the RUSH Late Models before focusing on his son Kevin’s RUSH Pro Mod career the last two years.

When the RUSH Sprint Car division was announced last year, Ruhlman was one of the first to express interest. On Sunday, Ruhlman made his debut a winning one leading all 20 laps and holding off a furious challenge by sixth starting Gale Ruth, Jr. for the $600 victory.

“When I was out racing in the Midwest I’d always see the non-wing Sprint Cars run and it always interested me,” explained the 41-year-old Bemus Point, New York standout. “I enjoyed running the RUSH Late Models and when RUSH launche
d this division I knew I wanted to get involved. Vicki (Emig) and Mike (Leone) do such a great job. These cars are so much fun to drive. It means a lot to win here in front of so many friends and family. I have to thank my son for the time spent in the garage over the winter. I’m glad to win this one at Norm’s (Asel) track. I raced a RUSH Late Model here several years ago before Norm bought the track. I can’t wait for Pittsburgh on Saturday.”


After a third place run in his heat race after bicycling and nearly going over in turn one, Ruhlman redrew the pole for the feature and took the early lead over Lernerville winner, Arnie Kent. Fourth starting Mike Lutz passed Zach Morrow for third on lap three before Morrow spun to bring out the caution. Lutz found the outside to his liking driving around Kent for second off turn four on lap four.

Meanwhile, Ruth started in sixth and was up to fourth after the Morrow spin. Ruth made his way by Kent for third on lap five then two laps later passed Lutz for second. The top four of Ruhlman, Ruth, Lutz, and Kent put on a tremendous battle on the racey bullring swapping the positions. For the second straight race, it looked like Ruth had the car to beat. However, just like on Wednesday when Ruth couldn’t make his way by Kent, Ruhlman ran the preferred line in the middle of turns one and two and the top of three and four as he kept Ruth at bay for the popular win in his Premier Communications/Ruhlman Race Cars/Close Racing Supply-sponsored #87R.

Ruhlman and Ruth were clearly the crowd favorites as the packed grandstands were on their feet throughout much of the event. Outside of Steve Cousins of nearby Eldred, Pa., Ruhlman and Ruth were the two closest racers to Bradford. Ruth also thrilled the crowd in the second heat race coming from fourth to win.

Ruth was second for the second straight race and is now tied with Kent for the $5,000 to-win Bonnell’s Rod Shop Weekly Series Championship point lead. Kent was able to get back by Lutz for third. Lutz, who won the first heat race from third, held onto fourth at the finish despite a broken front axle. Joe McEwen was fifth after starting eighth.

“We really couldn’t ask for much more after two events,” stated RUSH Director Vicki Emig. “The competitiveness and quality of racing has simply been amazing. The class has really been everything we had hoped for. Take for example at Lernerville you had Arnie Kent win his first ever race there after running a 410 Sprint off and on at the track for 20 years. Then Sunday to have Chad Ruhlman jump in a Sprint Car for the first time and beat several drivers that have a lot of 410 Sprint Car experience is pretty impressive. As one driver stated, ‘you have to be up on the wheel every single lap’.”

Besides Ruhlman, Steve Pedley and Brandon Hawkins also made their RUSH Sprint Car debuts bringing the total to 15 different competitors after two events. The Sweeney RUSH Sprint Cars will be make their debut at the “Monster Half-Mile” at Pittsburgh’s PA Motor Speedway this Saturday night (May 26) for the first of four appearances at the Imperial, Pa. facility. A doubleheader weekend will then take place on June 1-2. The RUSH Sprint Cars will join the All Star Circuit of Champions Sprint Cars on Friday at Lernerville and will be at Sharon with the “410” Sprints for the first of two appearances at the Hartford, Ohio oval on Saturday night.